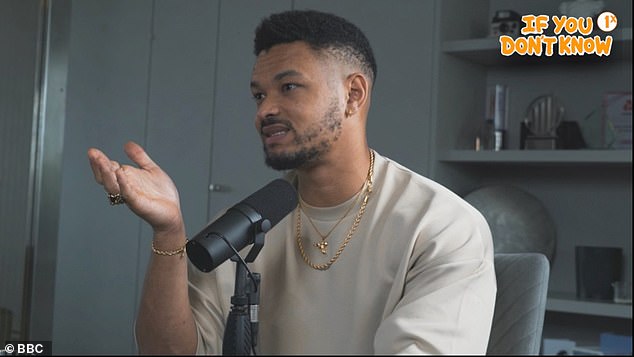 Dragons’ Den EXCLUSIVE: ‘There has not been a young, black man on the show’ Steven Bartlett, 28 speaks on becoming youngest EVER Dragon and his hopes to appeal to ‘the underrepresented’

Dragons’ Den’s youngest ever Dragon, Steven Bartlett, 28, has reflected on making show history and his hopes to appeal to the ‘underrepresented’ in a candid new interview.

Steven is the CEO of social media marketing agency The Social Chain – currently valued at £300million – a company he set up from his Manchester bedroom after dropping out of university at 22. He has replaced Tej Lalvani, 46, on the show.

Speaking on BBC Radio 1Xtra’s If You Don’t Know podcast, Botswana-born Steven said he was determined to join the panel as there ‘has not been a young, black man on the show’ and he wanted to be a role model for others.

History maker: Dragons’ Den’s youngest ever Dragon, CEO Steven Bartlett, has reflected on making show history and his hopes to appeal to the’underrepresented’ in a candid new interview

He said: ‘Much of the reason for me wanting to be a Dragon and wanting to do the show is because I know the show is a big platform and I am not represented on that show as an entrepreneur. There’s not been a young, black man on that show.

‘I feel like I have a responsibility to do this because it will show 12-year-old Steve, or other 12 year old Steve’s, that they too can be business people.

‘To see someone like me on the show as well that’s not going to wear a suit, and that is into all the same things you’re into – like hip-hop music, jollof rice, Manchester United and whatever else it is – I think is an enabler.

‘Because role models are most powerful when you can relate to the path they’ve walked.

Speaking on BBC Radio 1Xtra’s If You Don’t Know podcast, Botswana-born Steven said he was determined to join the panel as there ‘has not been a young, black man on the show’ and he wanted to be a role model for others

Steven is also driven by a desire to appeal to the ‘underrepresented’ and encourage and enable people to thrive in the business world.

‘And so by being a black man in a snapback, I will appeal to other black men, and women, in snapbacks. Or anybody that comes from an underrepresented background, and I will let them know that they can sit at the table.

‘That’s why I felt a sense of responsibility. It felt like this wasn’t really about me, it was about enabling a lot of people like me.

The new Dragon is the CEO of social media marketing agency The Social Chain – currently valued at £300 million – a company he set up from his bedroom at 22.

‘So why would I then change for TV? I’m trying to represent the real modern world of business and the real world of entrepreneurs and that’s not suited and booted for the majority.

‘It’s the internet, social media, it’s wearing whatever you want. Right now it’s like working at home. Imagining going on Dragon’s Den wearing a suit when 80% of the world are remote working in their boxer shorts.’

Discussing his age and going onto the panel alongside fellow older multi-millionaires Touker Suleyman, 67, Sara Davies, 37, Deborah Meaden, 62, and Peter Jones, 55, he said: ‘The other thing with going on that show, especially with the age component, is to feel “happy to be here”.

Steven is also driven by a desire to appeal to the ‘underrepresented’ and encourage and enable people to thrive in the business world.

‘There is such a thing as respecting an opportunity more than you respect yourself. People do that when they get jobs and they don’t speak up, or they just want to blend in.

‘It’s like “happy to be here syndrome” – where you never saw yourself this high, so you’re just trying to hold on to it. Whereas if you saw yourself higher, when you get there you’re still striving, you don’t feel like you’ve punched above your weight.

‘You can have “happy to be here syndrome” where you just wanna, you don’t wanna do anything that might risk the position you’ve reached. And you’re just holding on thinking “oh my god I can’t believe I’m here”.

‘And that comes from the immigrant mindset and also, me not seeing another Dragon like me on the show, is going to give me a bit of “happy to be here syndrome”. And I know that I’ve got to counteract that.

Steven also gave his tips for succeeding in business, citing the importance of ‘quitting’ before taking a leap of faith.

Tej announced in January that he would not be returning for the show’s 19th season and stepped away from the Den following a four-year stint.

He said: ‘Everyone glamourises starting… but you usually have to quit something before you start. The quitting part is actually the really hard part. Letting go of the branch and falling is much harder than grabbing on to a branch for me.

‘People don’t talk about the art of quitting and how pivotal that will be, probably even more important for you to become a success.

‘Everyone says this in my DMs. It’s like “I just don’t know where to start”. And the truth is, that is a mental Mount Everest that we choose to put in front of ourselves. Today, instead of trying to move Mount Everest, pick up one stone and move it out the way. Think of the name of your business today.

‘There’s not a perfect place to start – in fact when you’re starting a business you have a list of 100 things that need to be done now. When you’re starting you have name, website, etc… all at the same time. So just pick one of them and make a start on that today. That is the truth. You just need to start.’

‘What’s happened with me since I was very young, is my self belief has compounded positively upwards. I tried something, “omg I did it, and didn’t die! I’m gonna try something else”. And when you get in that positive confidence cycle… then you get to a point where you start to believe there’s not many things you can’t do.

‘Not taking life too seriously is one of the most important coping mechanisms anyone can have when you go into a high, intense, chaotic situation.

Steven also gave his tips for succeeding in business, citing the importance of ‘quitting’ before taking a leap of faith

‘Because the risk is you internalise what’s happening, whereas what I’ve always said is I approach the biggest challenges in my life whether it’s Dragon’s Den, starting a business or a podcast with this video game mindset where I am holding the controller, I am not in the game. And that means the character can die.

‘The chess piece, the pawn can go off the board, but it’s not going to kill me. And at the end of the day if I fail at anything I’m doing, I’m going to be fine I’m just holding the controller here. I’m not in the game.’

The BBC show sees budding entrepreneurs given three minutes to pitch their ideas to five multi-millionaires in the hope of securing financial backing.

This year Steven released a book titled Happy Sexy Millionaire and he also hosts a podcast called The Diary Of A CEO.

Steven said he is ‘honoured’ to be appearing on a show he has watched since he was just 12, Metro reports.

He said: ‘It’s a tremendous honour to join the Den, hopefully representing a new generation of entrepreneurs, inspiring young and specifically under-represented entrepreneurs to follow in my footsteps.’

He will join as part of series 19, which begins filming in the summer.

Sarah Clay, commissioning editor for entertainment at the BBC, said of the appointment: ‘As well as being our youngest ever Dragon, Steven’s unique approach to business will bring a whole new dynamic to the Den.

‘He brings a wealth of experience from the social media, technological and brand building worlds. I’m so excited to see him in the next series.’

Chi Ukairo, executive producer of Dragons’ Den at BBC Studios, added: ‘Steven is a great addition to the Den and we are all looking forward to seeing him in action when we start filming this summer.’

Tej announced in January that he would not be returning for the show’s 19th season, and would be stepping away after four years on board.

Tej, who serves as CEO of the UK’s largest vitamin company Vitabiotics and has an estimated net worth of £390million according to the Sunday Times Rich List, joined the show in 2017.

He said of his decision: ‘I’m truly excited for the upcoming series of Dragons’ Den, which looks set to be one of the best.

‘However after an incredibly enjoyable four years as a Dragon I have decided that this next series will be my last.

‘My commitment to the international growth and expansion of my core business and the numerous investments over the years sadly means I will be unable to dedicate the necessary time moving forward.’

He added: ‘I would like to thank the BBC for the great opportunity along with their support and understanding. I wish everyone on the team the very best as it’s been a true pleasure working together.’

Dragons’ Den has been delivering high-stakes TV drama since 2005 and for its 18th series moved from BBC2 to BBC1.

The last series was filmed in 2020 after the introduction of fresh guidelines allowing TV production to resume during the pandemic.

What are the traits of a highly successful entrepreneur?

Antigua government prepares for legal showdown in US courts