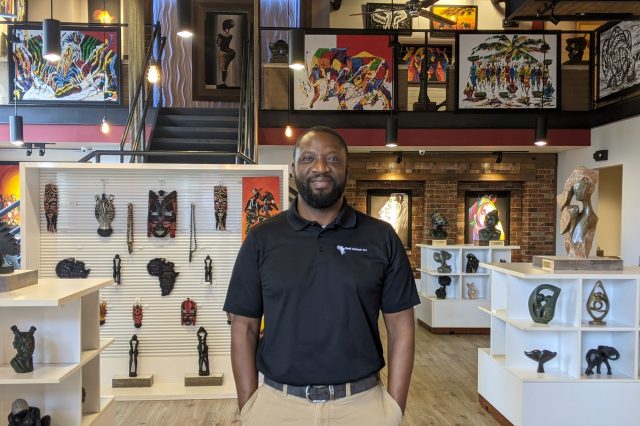 Calstain Ganda’s path to opening the Real African Art gallery began with the untimely death of his mother in his home country of Zimbabwe, Africa.

His mother, Chido Theodora, was known for taking care of others throughout their hometown of Chitungwiza. Ganda, who came to the U.S. in the ’90s to attend the University of North Carolina at Pembroke, routinely sent his mother money that she hardly used to splurge on herself. So when she died in February of 2017 from cervical cancer, Ganda truly felt what her loss meant to the community.

“Her passing really exposed the deficiencies,” he said. “Initially, I would send out some resources through the church and my siblings to try to continue serving the community the way that I knew she was. But it became very clear that it wasn’t working that way.”

When he thought of other ways to contribute to the people of Chitungwiza, he concluded there was no easier way than putting people to work. He would establish a business to pay Zimbabwean artists for their work to support their families.

Behind the meaning
Although the direct translation varies, Ganda says “Zimbabwe” is a Shona name that means “houses of stone.” He wanted to share the rich Zimbabwean culture with the world.

Stone sculptures with intricate details and paintings with bright hues are wall-to-wall inside the Real African Art gallery in University City, which opened on Feb. 1.

Ganda, 43, tells me that he personally knows a majority of the 72 artists featured in the gallery representing Zimbabwe and other African countries.

The central mission of the gallery is to improve the lives of the artists represented, he added.

One of Ganda’s favorite pieces is artist Morgan Chijumani’s stone sculpture “Under the Angelic Wings,” which depicts a mother and child.

His art appreciation comes from seeing craftsmen in his childhood days. He knew their level of artistry and also the uniqueness of the Zimbabwean stones.

He described Chitungwiza — a town about 20 miles southeast of the capital city, Harare — as a high-density area with “houses on top of each other in the poor to middle class part of Africa.”

In “Chi Town,” as it’s known, Ganda says most people are self-employed, earning around the U.S. equivalent of $200 a month. He says it’s enough for housing and food.

Launching the gallery
He registered the company, Real African Art LLC, toward the end of 2018 and had the first shipment of art arrive in the middle of 2019. Most of the art is themed around family and nature.

“Nature’s important to how we survive and for Africans, family is everything,” Ganda said.

Before getting into the gallery space, he attended expos and hosted small events to showcase artists’ works. Simultaneously, he created an online marketplace to sell smaller pieces — he says he maintains a small presence on Etsy.

“But I also knew for the larger pieces, with the logistics and the fragility of those pieces, I needed a better avenue to go to market. This really pushed us into the gallery,” he explained.

One of his younger brothers back in Zimbabwe — Ganda’s the oldest of five siblings — manages negotiations with the artists. There’s a core group of roughly 35 artists they’ve created a partnership with to purchase a number of items.

Ganda and his brother use informal focus groups to gauge what American consumers will like. But sometimes, he says selections are based on his “gut feeling.”

About 50% of the featured pieces are picked based on feedback from the artists and knowledge of consumer tastes. Ganda’s preferences make up about 25%. The remaining 25% is experimentation where the team says, “We don’t know how this will work, but let’s give it a shot.”

For now, Ganda splits his time between serving as curator of the gallery and his day job at Continental, a global supplier of automotive parts where he leads multiple teams in the aftermarket division.

Real-African-Art
Paintings and stone sculptures created by more than 70 African artists are featured throughout the Real African Art gallery in University City.

Economic impact in his homeland
The artists have shared with Ganda about the impact sales have had on their livelihoods — which rely mostly on tourism — a major help during the pandemic when international travel has taken a huge hit.

He witnessed the pandemic’s toll on his countrymen during a visit last August.

“I knew things were getting bad, but I didn’t realize things would be as bad as I saw them,” he recalled. “I saw people that were once doing OK, all of a sudden, were without food to eat, water to drink.”

During his monthlong stay, Ganda says they went without running water in their homes, which meant they had to fetch water with buckets each morning. Zimbabwe also experiences load shedding, or rolling electricity blackouts, that last 18 hours a day.

“If you get seven full days without ‘load shedding,’ that’s a blessing. Just the receipt of your basic amenities, running water and electricity, is not a given,” he said.

Additionally, he reflected on opening the gallery during the pandemic. Ganda says he understands that his company, founded to provide a better life for workers on another continent, also sells luxury goods as countless people in the U.S. are struggling too.

He turns to his faith to help it make sense.

“I have no desire to make a fortune in this place,” he said. “If this place runs well enough to support these artists, feed their families, put food on their tables, get their children to go to school, clothes on their back, I will have won.”

Ganda plans to expand the brand into other major cities. He’s eyeing the Atlanta market next.

When he sits in moments of silence during his daily prayers, he asks God to lead his path on this journey. He also thinks of his late mother. She was his biggest inspiration for the company. And all he can say is, “Mama, are you happy?”