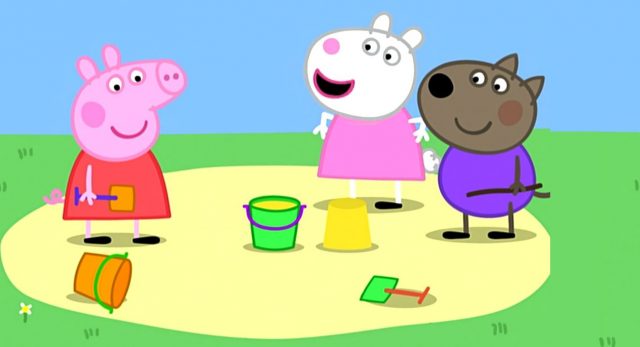 In a speech in November 2021, the British Prime Minister Boris Johnson threw spotlight on show that has run for 17 years and been exported to 118 countries. The Peppa Pig story needs to be studied by ambition artists and animators. A helpful list of the possibilities is given at the end of this article.

To many families taking their excited children to Peppa Pig World, the most surreal aspect isn’t the pastel-hued streets or the giant cartoon animals milling around; it’s the soundtrack. Piped from speakers spread around the park, the can’t-get-it-out-of-your-head theme tune plays on a continuous loop, and parents could be forgiven for feeling they’ve entered a nightmare rather than a toddler’s dreamscape.

Not so for Boris Johnson. The prime minister was so buoyed by his Sunday enjoying delights such an egg-shaped boat ride overlooked by Grampy Rabbit, where he was photographed grinning alongside his one-year-old son Wilfred and wife Carrie, that he was moved to praise the New Forest amusement park effusively in a speech to business leaders on Monday.

Describing Peppa Pig World as “very much my kind of place”, Johnson said the children’s show that spawned it exemplifies “the power of UK creativity”.

He cited the £6bn it has brought to the UK economy through its export to 118 countries, with theme parks also in the US and China. For good measure, he added: “No Whitehall civil servant could conceivably have come up with Peppa.”

Johnson is no stranger to invoking children’s cartoons in high level speeches – he drew on the experience of Kermit the frog to communicate the challenges of responding to climate change to UN world leaders earlier this month. But Peppa Pig was one allusion too far for many on social media, who characterised Johnson’s rambling speech as “one of the weirdest yet”. Labour condemned it as “shambolic”.

Boris Johnson enjoyed a ride with his wife and son at Peppa Pig World. He then spent a large part of his speech giving the phenomenon a shout out. Johnson may have been using Peppa Pig to praise the private sector and have a dig at the BBC as well as the civil service, but he is far from the first to find himself fascinated by the mysterious power the show wields.

Peppa Pig is a British preschool animated television series by Astley Baker Davies. The show revolves around Peppa, an anthropomorphic female piglet and her family and her peers are other animals. The show first aired on 31 May 2004. The seventh season began broadcasting on 5 March 2021. Peppa Pig has been broadcast in over 180 countries.

The franchise has been telling the story of Peppa, who lives on a hill with Mummy Pig, Daddy Pig and little brother George, through hundreds of episodes for 18 years.

Peppa Pig IS telecastING on Channel 5 and Nick Jr. (UK) in the UK, Nickelodeon/Nick Jr. (US) in the US, ABC 4 Kids in Australia and Discovery Kids in Spanish- and Portuguese-speaking Latin America.

It can also be seen on Nick Jr. in the UK, Portugal, Italy, Benelux, Scandinavia, Australia. In Taiwan the show aired on Playhouse Disney.

The story has been translated into multiple languages around the world – Peppa is especially popular in China – and has even sparked concerns in the US that children are picking up British accents.

WHY IS PEPPA PIG POPULAR?

The creators have suggested the reason for its popularity lies in its emphasis on family, which is one of the few concepts that makes sense to very young children. They also spotted a gap in the market for an animated show starring a female character, and have tried to achieve a sense of playfulness and silliness that toddlers would find infectious, through the pigs’ snorts and muddy puddle-jumping.

Each episode is approximately five minutes long which appeals to the low attention span of toddlers. Each of Peppa’s friends is a different species of animal. Peppa’s friends are her age, and Peppa’s younger brother George’s friends are his age. Episodes tend to feature everyday activities such as attending playgroup, going swimming, visits with their grandparents, cousins, and friends, going to the playground or riding their bikes.

The characters blush when embarrassed, and their mouths express other emotions such as sadness, happiness, irritation, bewilderment, and confusion.

Sarah Ann Kennedy, who runs the animation course at the University of Central Lancashire and wrote two episodes of Peppa Pig, credits the show’s global popularity to its focus on “very universal issues”, from learning to ride a bike to going shopping or falling out with a friend. “What’s clever about it is it’s like a soap, they deal with very gentle issues that you have at that age which seem quite big to you,” she said. “Some other things are a bit complicated and can be a bit much.”

The show hasn’t been immune to criticism, however. It stands accused of reinforcing gender stereotypes through its presentation of a traditional middle class nuclear family structure in which “daddy pig” works while “mummy pig” looks after the children.

While Kennedy was pleased to see the “clever, funny, well-written” show given the prime ministerial seal of approval, she sees an irony in Johnson upholding the franchise as a shining example of British business at a time when funding for arts subjects is being cut in schools and universities. “When he makes comments like that you think, why don’t you put a bit more money towards the arts if you realise how much money it can make?”

This is an extraordinary story and a message to artists and animators as to what can be done with a loveable character.

Here is a helpful list of money earning potential

Chika’s Snacks: How one woman’s startup bagged £800,000 after ditching Dragons’ Den offer of...