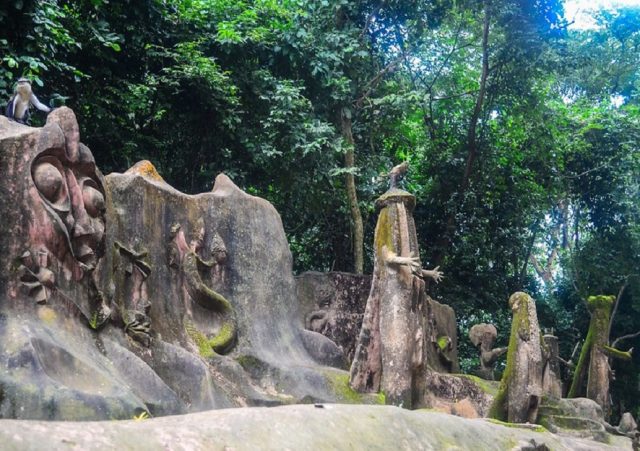 Here is a brief history of the famed Osogbo art movement that produced amazing artists from the 1960s.

ṣogbo pronounced Oshogbo is a Yoruba town that is sometimes referred to as the heart of Nigerian art culture. Its art history cannot stand without the Mbari Mbayo, a club that was established for African writers, artists, and musicians in Ibadan before its concept was transferred to Oshogbo.

It all started with Jewish German scholar and entrepreneur Ulli Beier. After moving to Nigeria with his Austrian artist wife Susanne Wenger, the two wanted to break the already existing gap between Whites and Nigerians.

Beier made a conscious effort to know the Nigerian cultural environment and founded the ‘Black Orpheus’ magazine in Ibadan in 1957. It soon gained an international market and was patronized by writers and poets both local and international, with Yoruba text translations available.

Wenger, after separating from her husband Beier, formed a circle of artists known as the “New Sacred Art.” She took on the project of rebuilding the Osun Holy Grove in 1960 and became a custodian, nurturing and preserving the place. Today, that area is a UNESCO World Cultural Heritage site.

Beier, having founded the first Mbari Club in Ibadan in 1961, held art exhibitions to showcase the works of locals. It was during one such exhibition that he met dramatist and composer Duro Ladipo who converted his father’s house to open Oshogbo’s own Mbari Mbayo club. (Mbari was an Igbo word for creation).

Oshogbo was then a city of 250,000 people, about 50 miles (80 km) northeast of Ibadan. Ladipo transformed his father’s house into an art gallery and theatre where he produced his plays. In order for the club to appeal to the locals in Oshogbo, Ladipo constantly made references to Yoruba mythology, drumming, dance, and poetry and soon developed a kind of Yoruba opera, according to one account.

The Oshogbo club evolved so much so that it did not only cater to artists and intellectuals but the everyday people in the community as well. Beier and Ladipo, with their ‘Oshogbo school’ in the 1960s, nurtured unemployed primary-school dropouts into fine artists whose works were a true blend of the foreign influences and their Oshogbo traditions. They created fresh and sophisticated art.

The Mbari Mbayo club in Oshogbo became a home where their works would be on display, a move which helped the local art scene to thrive and appeal to international markets.

Ogundele’s works are a fine blend of the European artist’s influence and traditional Yoruba culture. The power of Ogun, the Yoruba orisha of war, fire, and iron, is a theme that flows through his works.

Fabunmi was a member of the Duro Ladipo ensemble. Be it his yarn paintings or city prints, Fabunmi’s works almost always had the city of Oshogbo as his theme and the Yoruba sculpture effects were also evident in his work.

How to Start a Fashion Business