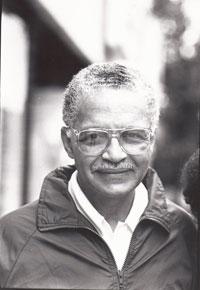 At the close of his remarkable essay “Columbus and the Origins of Racism in the Americas,” Jan Carew wrote, “In this hemisphere we cannot just claim that by mingling our blood with that of the destroyer of the Indian, the enslaver of the African and the exploiter of peoples of a rainbow array of races, colors, creeds, we do not have to acknowledge the roots of our existence in the human world.

“For us, the sons and daughters of the New World diaspora, our ancestors are those who struggled most valiantly, paid the highest price in blood and suffering and who generation after generation pick up the fallen standards, from those who fought for freedom before them,” he added.
This was Carew at his most elegant and uncompromising stance, an unflinching freedom fighter who asked no quarters and gave none.   The final chapter of his long productive and well-traveled life closed on December 6 in Louisville, Kentucky.  He was 92.
Peripatetic is a fancy but descriptive word that defined Carew’s restless footfalls and his ventures took him practically around the globe from his birthplace in British Guiana (Guyana) to Grenada, France, Spain, Ghana, Mexico, Czechoslovakia, London where he acquired his education and established his engaging personality and limitless scholarship.
Each of these stops along the way was blessed with his unimpeachable integrity, his way of commanding the moment and influencing a cadre of students where he taught at Princeton, Rutgers, George Mason, Lincoln and Louisville University.
Perhaps his longest and most distinguished tenure was at Northwestern University where he was an Emeritus Professor of African American Studies from 1973 to 1987.
He was a very impressive speaker who left his audiences enthralled, particularly when he read from his novel Black Midas or chose to expound on his days with Malcolm X.
What his friend Don Rojas said of him is representative of his majesty and stature:  “Jan Carew was the quintessential ‘Renaissance Man’; author, historian, internationalist, public intellectual, social justice activist and pioneer in experimenting with sustainable lifestyles for people of color. Elegant of gait and demeanor, erudite, witty and warm-hearted, he could speak hard truths to power with a pleasant smile on his face, and strike at oppression and exploitation with the power of an iron fist cloaked in a velvet glove.
“Although born in Guyana,” Rojas continued, “he claimed the world as his homeland. I enjoyed the privilege of working with him as his editor on one of his many books–a history of Grenada from the days of slavery to the triumph of the Maurice Bishop-led revolution in 1979. While his loss will be mourned by legions of people on all the continents, his life and legacy will be celebrated for generations to come.”
With his wife, Joy, Carew was working on his memoirs at the time of his death, and we can expect it would possess all the illuminating lightning and none of the timidity that characterized his writing and life.  “Find me the fulcrum and I will move the world,” Archimedes the Greek thinker decried, and in so many ways Carew found it and moved several sectors of the oppressed in their quest for liberty and equality.
Among those left to mourn his passing is his wife, Joy Gleason Carew, daughters Lisa St. Aubin de Teran, Shantoba Eliza Carew, and son David Christopher Carew, grandchildren Iseult Teran, Alexander Macbeth, and Benicio Carew, and great grandson Felix Radford.  He also leaves his sister, Sheila Thorpe, nephews E. Nigel Harris, Michael Harris, and nieces Alexis Selman and Denise Harris.
Carew chose cremation and his remains will be interred with his wife’s family in Winston-Salem, NC.