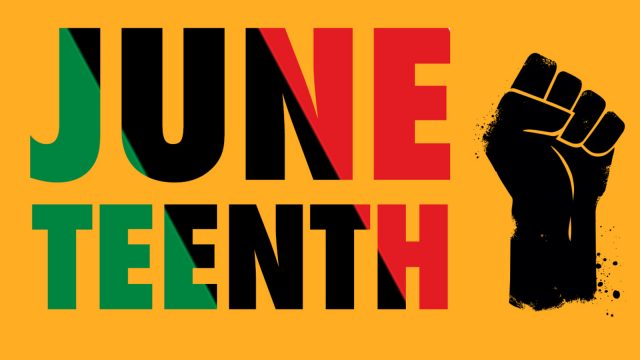 Juneteenth is an unofficial United States Holiday. It is celebrated in all but one state – Hawaii.

On June 19, 1865, Major General Gordon Granger arrived in Galveston, TX, and announced the end of the Civil War and the end of slavery. Although the Emancipation Proclamation had happened 2½ years earlier on January 1,
1863, many slave owners continued to hold their slaves captive after the announcement. So Juneteenth became a symbolic date representing African American freedom.

“The people of Texas are informed that, in accordance with a proclamation from the Executive of the United States, all slaves are free. This involves an absolute equality of personal rights and rights of property, between former masters and slaves and the connection heretofore existing between them, becomes that between employer and hired labor.

The Freedmen are advised to remain at their present homes and work for wages.
They are informed that they will not be allowed to collect at military posts; and they will not be supported in idleness either there or elsewhere.”

After the general order, some slave masters withheld the information from their slaves, holding them as slaves through one more harvest season. It would save them money as they did not pay slaves.

The following year, in 1866, Texans celebrated Juneteenth with community-centric events. Over time, communities have developed their own traditions. Some communities purchased land for Juneteenth celebrations, such as Emancipation Park in Houston, TX.

As families emigrated from Texas to other parts of the United States, they carried the Juneteenth celebrations with them.

Although Juneteenth is not a federal holiday, almost all states and the District of Columbia have passed legislation recognizing it as a holiday or observance.

Within a few years, African Americans in other states were celebrating the day as well, making it an annual tradition. Celebrations have continued across the United States into the 21st century and typically include prayer and religious services, speeches, educational events, parades, family gatherings and picnics, and festivals with music, food, and dancing.

The day is also celebrated outside the United States, with organizations in a number of countries using the day to recognize the end of slavery and to celebrate the culture and achievements of African Americans.

Celebrations would include public readings of the Emancipation Proclamation, singing traditional songs such as “Swing Low, Sweet Chariot” and “Lift Every Voice and Sing”, and reading of works by noted African-American writers such as Ralph Ellison and Maya Angelou. Celebrations include rodeos, street fairs, cookouts, family reunions, park parties, historical reenactments, and Miss Juneteenth contests. In the publication – Tourism Review International, writers observed that the “Barbecue is the centerpiece of most Juneteenth celebrations”

Although the holiday is still mostly unknown outside African-American communities, it has gained mainstream awareness through depictions in entertainment media, such as episodes of TV series Atlanta (2016) and Black-ish (2017), the latter of which featured musical numbers which mention the occasion.

With the growing awareness of black history brought about by the Black Lives Matter protests in May / June 2020 – the holiday is gaining mainstream traction. There was huge outcry when Trump wanted to hold a rally in Tulsa on Juneteenth. – Not just because of the date, but because of the historic massacre of wealthy blacks in the Tulsa’s black wall street in 1921. The town’s buildings and homes were looted, then burned to the ground by white KKK men out of jealousy – with the excuse trigger that a young black man had assaulted a white woman.

Almost all American states have previously declared Juneteenth an “observance,” meaning it’s commemoratively celebrated and marked on the calendar, but it’s not recognized on a larger scale—similar to Mother’s Day or Flag Day. Two days ago (17th June) Virginia declared Juneteenth a state holiday. Singer and Producer Pharrel Williams helped to announce the news. Here is an extract of his address.

“Our country excels, and I mean, excels at celebrating Independence Day. But it’s not perfect. Juneteenth deserves the same level of recognition and celebration. July 4, 1776, not everybody was free and celebrating their independence day. So here’s our day, and if you love us, it’ll be your day, too,”.