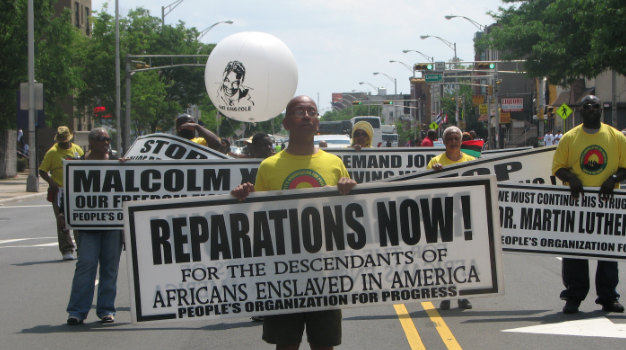 California is the first state in the country to formally study how to make amends.

In 1852, just two years after California had been admitted to the US as a “free” state, authorities turned three formerly enslaved people who had launched a prosperous gold mining business — Carter Perkins, Robert Perkins and Sandy Jones — back to their former owner, who reported them as runaways even though he had previously set them free.

Despite the Perkins mounting a vigorous legal defence, the pro-slavery state Supreme Court ordered the trio back to Mississippi. The California constitution banned slavery, but part of the compromise that allowed the state’s admission into the US involved a federal fugitive slave law. According to legend, the group escaped as their ship passed through Panama, but their ultimate fate is unknown.

Now, nearly 170 years later, the state is embarking on a study of what reparations for the descendants of slavery would look like in California.

Despite its liberal reputation, the Golden state has a long history of de facto and de jure discrimination and violence against Black people, and on Tuesday it began a two-year study into how to make amends.

“I’m so thankful to my ancestors, who survived so much trauma, so much pain, so much tragedy, so much brutality, so that I could live,” Lisa Holder, a civil rights attorney on the nine-member panel conducting the study, told the AP. “And I am ready to fight to deliver them — our ancestors —justice.”

The commission is reportedly considering everything from home ownership incentives and educational benefits to direct payments.

“It might mean free college at our CSU and our UC systems to African Americans,” state senator Steven Bradford has said of the effort. “It might be zero down payment for first time African American homeowners. We know they have the biggest challenge in homeownership, not only in California but across this nation.”

California’s history of discrimination towards Black people begins from its first moments as a fugitive slave state, and continued throughout its history, which includes vicious KKK violence going unpunished, Jim Crow practices like redlining and voter discrimination. Certain California counties were among the few under federal supervision under the Voting Rights Act, owing to their history of disenfranchisement.

Though the most outright forms of discrimination have been made illegal, Black Californians still face enormous challenges in the state, particularly economic inequality. They’re only six per cent of the population, but constitute nearly 30 per cent of those facing homelessness. In recent years, there has been an exodus of Black families out of high-cost California cities into other regions of the state and those beyond its borders, and California’s Black population has been declining precipitously, especially in cities like Los Angeles and San Francisco.

Republicans in the state legislature overwhelmingly opposed the commission, and even some reparations advocates are sceptical that a true accounting and redressing of the wounds of slavery and discrimination could take place without federal involvement. A reparations bill has stalled in Congress since 1989.

“I have a sense of proprietariness about the use of the term reparations, because I think people should not be given the impression that the kinds of steps that are taken at the state or local level actually constitute a comprehensive or true reparations plan,” William Darity Jr, a reparations expert at Duke University, told CalMatters. “Whatever California does perhaps could be called atonement, or it could be called a correction for past actions.”

Still, California governor Gavin Newsom said he hopes the state serves as an example to the rest of the country.

“This is not just about California,” he said at a signing ceremony for the study group in September. “This is about making an impact and a dent across the rest of the country and that, I think, drives a lot of our work here in the state.”

The California Reparations Task Force kicked off their first meeting on June 1st, 2021! Ms. Kamilah V. Moore was elected Chair and Dr. Amos Brown will serve as the Vice-Chair.

Below are comments from the meeting.

“Dr. Amos Brown quoted Nike, in saying that we need to ‘Just Do It’. Reparations are not just about restorative justice for the direct descendants of slavery. Advancing Reparations is about repairing the ongoing harm that is being experienced by black families and children as a result of historic, systemic racism. Reparations are about dismantling racist systems that actively and daily oppress, imprison, murder, and literally destroy the hopes and aspirations of all black peoples in this state and country. Reparations are about acknowledging the fact that capitalism, neoliberal or otherwise, will never work for black people because we have never owned the means of production, because we are the means of production and our bodies have not been our own. Reparations are not welfare, they are justice in the midst of ongoing injustice. Reparations are representative of our collective struggle towards a more compassionate and equitable society. I applaud my state in taking this step and I look forward to actively working to educate and mobilize other Californians in advancing reparations as a symbol to other states, that we can and will stamp out the vestiges of slavery here and across the country. Thank you.”
– Michelle Burton, Director, Social Change Institute.

Historically Black Colleges and Universities are leaders in student outcomes

RACE AND POVERTY, FIFTY YEARS AFTER THE MARCH with MLK