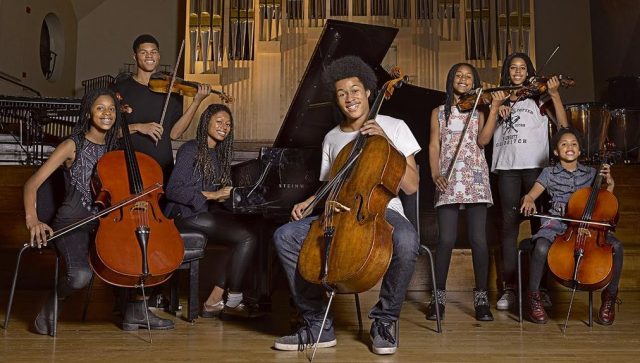 The Kanneh-Mason family burst onto our TV screens on the show Britain’s Got Talent in May 2015. Six siblings playing violins, the cello and a piano wowed the audience and judges – including Simon Cowell and Alecia Dixon.

Sheku Kanneh-Mason MBE (born 4 April 1999), the third child for the parents, is a British cellist who won the 2016 BBC Young Musician award. He was the first black musician to win the competition since its launch in 1978. He played at the wedding of Prince Harry to Meghan Markle on 19 May 2018, and this sent his career into the stratosphere.

On 19th June 2020, the family were interviewed on Good Morning Britain. When asked if they thought classical music was doing enough to embrace diversity, to include people of different backgrounds, they agreed that classical events were not diverse. The oldest child Isata first developed her talent from the age of 6 and others followed, working diligently to perfect their craft. The younger children probably thought this was the norm.

There are 7 children in the family, and Simon Cowell called them the world’s most talented family. Their parents worked very hard to ensure they had the opportunities. The family grew up in Nottingham, England. Their father, Stuart Mason is a luxury hotel business manager from Antigua, and Dr. Kadiatu Kanneh is a former lecturer at the University of Birmingham, who hails from Sierra Leone.

Sheku began learning the cello at the age of six having briefly played the violin. He took part in Music for Everyone’s Stringwise courses, impressing his conductors with his astonishing ability to play everything from memory.

At the age of nine, he passed the Grade 8 cello examination with the highest marks in the UK, and won the Marguerite Swan Memorial Prize. Also aged nine he won an ABRSM junior scholarship to join the Junior Academy of the Royal Academy of Music. Kanneh-Mason received his was educated Trinity School, Nottingham, where he studied for A levels in Music, Maths and Physics.

The youngest said she used to not enjoy practice when younger, but she just gets on with it now. It seems she has been taught the value of this. The family does have healthy sense of fun and competition, positively squaring up on pieces at home – and inspiring each other during their jam sessions. They have been able to keep people around the world entertained over the 2020 pandemic lockdown via performances on Social Media.

Dad was asked if he ever gets fed up of all the noise from the many instruments in the house. He said well, it can be difficult at times when he is working from home and is on a conference call, and people say to him press the mute button, because there is a piano or cello on in the background.

It has been lovely to have them home for 3 months altogether during lockdown. Not sure if will get that time again. Sheku had him as young classical star in January 2019.

Older sister – Isata a genius piano player, has had a number 1 album and they were both featured in interviews classical radio as young stars on separate occasions.

Family may do a family album. Might come up with something as they have been playing alot together recently at home.

He enjoyed playing at Harry and Meghan. It was more exciting at than nerve racking. The family all watched at home and they invited neighbours and other family members.

Kanneh-Mason eventually became a member of the Chineke! Orchestra, which was founded by Chi-chi Nwanoku for black and minority ethnic classical musicians; His sister Isata and brother Braimah are also members. In 2016, Kanneh-Mason is quoted in the Guardian newspaper as saying:

“Chineke! is a really inspiring project. I rarely go to a concert and see that kind of diversity in the orchestra. Or in the audience. Having the orchestra will definitely change the culture. It’s so important we’re celebrating music by black composers, too, like the piece by Chevalier de Saint-Georges we’re playing in September.”

In November 2016, Kanneh-Mason was the subject of a BBC Four documentary entitled Young, Gifted and Classical: The Making of a Maestro. The following month, he was interviewed for BBC Radio 4’s Front Row round-up of the year’s major arts and entertainment award winners.

In January 2018, it was reported that Kanneh-Mason had donated £3,000 to his former secondary school, enabling ten other pupils to continue their cello lessons.

Sheku currently studies with Hannah Roberts at the Royal Academy of Music in London.

Kanneh-Mason signed a deal for worldwide general management with London-based boutique agency, Enticott Music Management in June 2016, and went on to sign a major recording contract with classical music label Decca Classics in November 2016. The record deal was signed on board a Nottingham City Transport bus which the local authority had named in his honour after Kanneh-Mason won the BBC Young Musician contest. The label announced that his first recording would feature the piece with which he won the BBC’s Young Musician of the Year contest, Shostakovich’s Cello Concerto No.1.

In early February 2018, the BBC reported that Kanneh-Mason’s album Inspiration was “the biggest-selling British debut of the year to date”, entering the UK Albums Chart at number 18, had become number one on the UK classical albums chart, and had achieved 2.5 million streams on Spotify.

Sheku’s own arrangement of Bob Marley’s No Woman No Cry was also featured on the album, and went viral on social media, clocking 1 million streams in its first month on Spotify alone. He currently gets about a million monthly listeners on spotify.

This Family is an example of ambition, persistence, dedication and hard work. The parents are an inspiration – a shining light of how to gently encourage extra-ordinary talent in children.

The children practice 2 to 3 hours every day during the week, and 5 to 7 hours at the weekend, when not touring or attending the Royal Academy of Music. They have all won scholarships. Every Saturday, they got up at 4.30am to travel to London on the train from Nottingham to attend classes at the Academy.

Their parents have to be commended for introducing the eldest to music, and encouraging all the others to follow suit. Making the sacrifice to take the children to classes is not easy with one child, never mind for 7 children.

They are described as exceptionally gifted by the Royal Junior Academy.

The Frank White is the Englishman who built Sheku’s Cello. He is so happy when he hears Sheku play it, and says he could listen to him forever. You get the feeling that happiness will help him live for a very long time, even though he is retired.

Below is a news segment about the family from CBS in 2018.