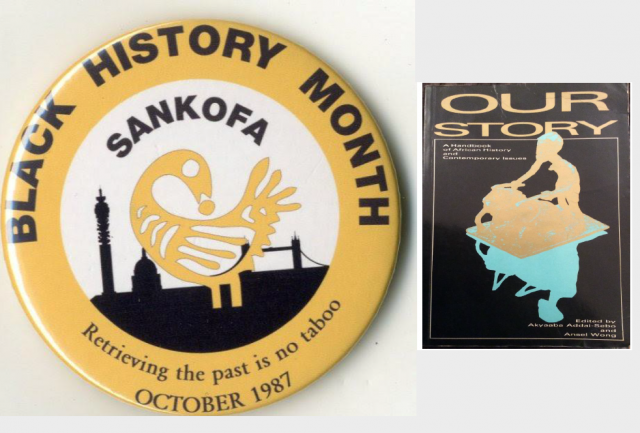 A historical account from one of the instigators – Ansel Wong.

Introduction
In 2017, we will observe the 30th year of the observance of Black History Month in the UK.

By the time America celebrated its bicentenary in 1976 the week had become a month-long initiative and rebranded Black History Month.

The observation of the month of October as Black History Month in the UK had its gestation in an anti-racist momentum initiated by the programmes and priorities of the Ethnic Minorities Unit (EMU) of the Greater London Council (GLC), led by the Principal Race Relations Adviser and Head of the Unit, Ansel Wong.

When the GLC & EMU was abolished, the political determination to keep this momentum live was driven by the leaders of the successor bodies – The Chair of the London Strategic Policy Unit (LSPU), Cllr Linda Bellos and the Chair of the Race Equality Policy Group (REPG), Cllr Narendra Makanji.

Post abolition of the GLC and with the unqualified support of Linda Bellos and Narendra Makanji plus the Deputy Leader of the Inner London Education Authority (ILEA), Bernard Wiltshire, staff in REPG and other units of the LSPU continued working on this idea, led by Akyaaba Addai-Sebo who was a Policy Team Leader in the Unit. Much of the success of this initiative was due to his vision and efforts.

The Imperatives for BHM UK

In an interview published in New African with Akyaaba Addai-Sebo, he outlined some of the push factors that influenced our thinking in creating and implementing the designation in the UK of October as Black History Month. “The inspiration for Black History Month came from an incident that happened at the GLC where I worked as the Co-ordinator of Special Projects.

A colleague of mine, a woman, came to work one morning, looking very downcast and not herself. I asked her what the matter was and she confided to me that the previous night when she was putting her son Marcus to bed he asked her, “Mum, why can’t I be white?” The mother was taken aback. She said that she was so shocked that she didn’t know how to respond to her son. The boy that had been named after Marcus Garvey had asked why he couldn’t be white!

In the US, I would lecture about Africa and its contribution to world civilisation. I would talk to many schoolchildren and their parents about the African genius, the appropriateness and validity of our traditions, moral code, hospitality and I would demonstrate how we lived in Africa, the games we played as children and the food we ate. Session after session, some children and their parents would come to me attesting their new found faith in themselves as Africans, and the change that the encounter had brought to their homes.

So when this incident with Marcus took place in London, it dawned on me that something had to happen here in Britain. I was very familiar with black history month in America, and thought that something like that had to be done here in the UK, because if this was the fountainhead of colonialism, imperialism and racism, and despite all the institutions of higher learning and research and also the cluster of African embassies, you could still find a six year old boy being confused about his identity even though his mother had tried to correct it at birth, that meant the mother had not succeeded because the wider society had failed her. That also meant that the world out there and the happenings in it, particularly in the playgrounds and classrooms of the various schools in the UK were so strong and powerful that they denigrated that person’s identity, which made that child question his identity as an African or being black. That was something that really touched me and so I reflected on it for many weeks. The only thing that came to me after those weeks of reflection was that something had to be done here in the UK to permanently celebrate Africa’s contribution to world civilisation”.

The upshot of this incident was a series of discussions within the staff and supporters of the GLC’s Ethnic Minorities Unit resulting in a decision to “take action” and incorporate an annual celebration of Black History into our programme of activities.

Our Programme of activities included the celebration of African Jubilee Year from August 1987 to July 1988 with October designated as Black History Month.

But before then, I managed to identify sufficient resources, in part through creative accounting, to organise a series of lectures, that in hindsight, were the precursors to the designation of October as Black History Month in 1987. At the Greater London Council, the local government for London, we were at the forefront of the campaigns against institutional racism in the UK and the apartheid regimes in Southern Africa.

This vantage point in the administration of the city of London enabled us to invite into our community personalities like Sally Mugabe, Graca Machel, Winnie Mandela, Nina Simone, Angela Davis, Rev. Jesse Jackson, Max Roach, Hugh Masakela, John Henrik Clarke, Frances Cress-Welsing, Tony Martin, Yosef ben-Jochannan, Mawulena Karenga, Grand Ballets d’Afrique Noire, Ray Charles, Burning Spear and many more to inspire, educate and help in the in the intellectual preparation of our community for the future safety and development of Africa in our collective interest. These lectures provided the impetus, political and institutional, for the platform for more daring initiatives and were also held in Birmingham, Manchester and other cities across the UK. They were compiled and published as Our Story2, edited by Akyaaba Addai-Sebo and Ansel Wong.

Pictured above as the feature image is the book – Our Story: A Handbook of African History and Contemporary Issues, ed. Akyaaba Addai-Sebo & Ansel Wong, London Strategic Policy Unit, 1988. It is presently out of print. In many ways, this publication epitomised the collaborative drive that underpinned this celebration. As local government staff, we were keen to broker genuine community involvement and engagement drawing on the contributions of activists and professional expertise among the African and Caribbean Diaspora. The book was designed by Robert Lee, Kofi Hagan and Anum A Iyapo; photographic research by Armet Francis; manuscript preparation by RT Studios and printed by Hansib Publishing, the nation’s leading Black Publishing House.

We also organised some cultural events and brought in international renowned musicians from the UK, the Caribbean, the USA, Africa, Ireland and India to perform at the Wembley Arena and the Royal Albert Hall. The celebratory Concert to launch the first Black History Month included such luminaries as Hugh Masakela, Max Roach, Ghanaba, Earls-in-Flight, Alap, Tania Maria, Courtney Pyne, Grandes Ballets d’Afrique Noir of Guinea, Henrik Clarke, Tony Martin, Josef ben-Jochannan and Frances Cress Welsing, among others. We filled the Royal Albert Hall with schoolchildren from all over Greater London for a week, where they listened to inspirational music and talks. The successes of these events, prompted us to agree that this approach had to be institutionalised, and so the idea of Black History Month was born.

We drafted and issued an African Jubilee Year Declaration that:

• Recognised the contributions of Africans to the cultural, economic and political life of London and the UK.
• Called upon the London boroughs to recognise this fact and take their duties as enjoined by the Race Relations Act very seriously, to intensify their support against apartheid, and to continue the process of naming monuments, parks and buildings after illustrious African leaders, and to do everything in their power to ensure that black children did not lose the fact of the genius of their African-ness.

African Jubilee Year was a celebration of