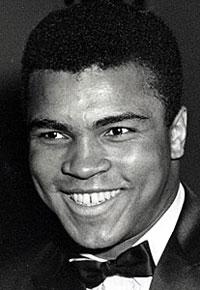 Boxing great Muhammad Ali, known for his unabashed self-confidence inside and outside the ring as well as his outspokenness on social and humanitarian causes, is the recipient of the 2012 Liberty Medal.

Ali, 70, will receive the medal in a ceremony on Sept. 13 in Philadelphia at the National Constitution Center on Independence Mall. The three-time world heavyweight champion was not in attendance for Thursday’s announcement.
“Ali embodies the spirit of the Liberty Medal by embracing the ideals of the Constitution — freedom, self-governance, equality and empowerment — and helping to spread them across the globe,” said former President Bill Clinton, chairman of the National Constitution Center.
Liberty Medal sponsors and partners said Ali’s lifelong courage and conviction exemplify the qualities that the award was established to honor, from his outspoken advocacy for civil and religious freedom to his philanthropy, social activism and humanitarian efforts.
“Muhammad Ali symbolizes all that makes America great, while pushing us as a people and as a nation to be better,” said National Constitution Center president and chief executive officer David Eisner. “Each big fight of his life has inspired a new chapter of civic action.”
The fast-talking, boisterous fighter who referred to himself as “the greatest” was born Cassius Marcellus Clay Jr. on Jan. 17, 1942. He took up boxing at age 12 and flourished in the ring, becoming a top amateur and Olympic gold medalist.
Ali won the heavyweight title in 1964, defeating the heavily favored Sonny Liston. Soon after, Ali — who was raised in a Baptist family — announced his conversion to Islam and changed his name.
While in his prime, Ali was stripped of his heavyweight crown in 1967 for refusing to be inducted into the military during the Vietnam War because of his religious beliefs. The decision resulted in a draft-evasion conviction and spurred a long legal fight that ended in 1971, when the U.S. Supreme Court ruled in his favor.
Three years after his retirement from boxing in 1981, Ali announced he had Parkinson’s disease, a degenerative brain condition that some researchers believe may be brought on by repeated blows to the head. Despite the diagnosis, he devoted himself to traveling the world on humanitarian missions bringing food and medical supplies to developing nations throughout the Middle East, Africa, South America and Asia. He also continues to work at home in the U.S. to raise funds for organizations including the Special Olympics and the Muhammad Ali Parkinson Research Center in Phoenix.
In 2005, Ali was awarded the Presidential Medal of Freedom.
Previous recipients of the Liberty Medal, which was established in 1988 to celebrate the bicentennial of the Constitution, include rock singer and human rights activist Bono, former South African President Nelson Mandela and former President Jimmy Carter. Six winners have subsequently received the Nobel Peace Prize.
The National Constitution Center, which opened in 2003 near Independence Hall and the Liberty Bell, is dedicated to increasing public understanding of the Constitution and the ideas and values it represents.

The Nigerian author blazed the trail for a generation of African writers, says Kwame...