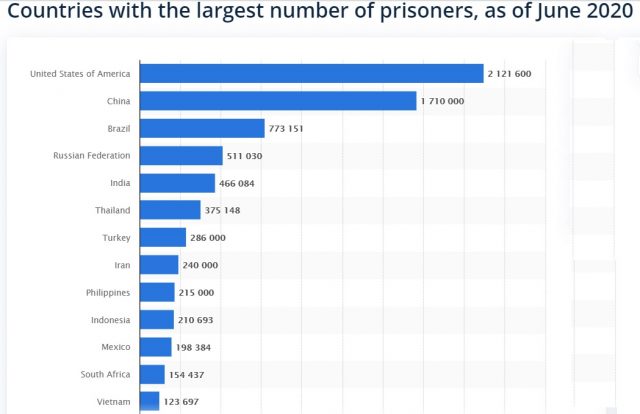 There is a call for a rethink of the justice system, and an out of the box look at the huge numbers of prisoners in America.

As of June 2020, the United States had the highest number of incarcerated individuals worldwide, with more than 2.12 million people in prison. The U.S. was followed by China, Brazil, the Russian Federation, and India.

The incarceration problem
The United States has an incredibly high number of incarcerated individuals. Therefore, the incarceration problem has become a widely contested issue, because it impacts disadvantaged people and minorities the most. Additionally, the prison system has become capitalized by outside corporations which fund prisons, but there is still a high cost to tax-payers. Furthermore, there has been an increase in the amount of private prisons that have been created. For-profit prison companies have come under scrutiny because of their lack of satisfactory staff and widespread lobbying. Violent offenses are the most common type of offense among prisoners in the U.S.

Prisoners in the U.S.

Within OECD countries, the United States had the highest rate of incarceration worldwide, at 655 prisoners per 100,000 residents. This is almost double that of Turkey, the country with the second highest incarceration rate. Within in the United States, Texas had the highest number of prisoners under federal or state jurisdiction, however, it was California that spent the most on corrections.

US prisoners by sex and ethnicity 2019

This statistic shows the imprisonment rate of prisoners under jurisdiction of federal or state correctional authorities in 2019, by sex and ethnicity. In 2019, about 2,203 individuals per 100,000 Black men were imprisoned in the United States. The overall imprisonment rate in 2019 stood at 419 per 100,000 Americans.