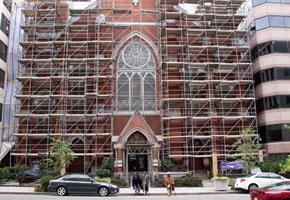 Each year, the National Trust uses the list to highlight important architectural, cultural and natural heritage sites in the U.S. that are at risk of destruction or irreparable damage. In all, the National Trust has placed more than 230 locations on the list during the past 25 years. The purpose of the list is to protect such sites, although about a handful of listed destinations have been lost since the list was started in 1988.
“As the last known surviving boyhood home of Malcolm Little the Ella Little Collins-Malcolm X House in Roxbury, MA, has stood vacant and underutilized for more than 30 years,” said Trevor Johnson, program assistant for the Boston field office of the National Trust for Historic Preservation. “As a result, the condition of the house has deteriorated and much of its historic fabric is at risk of being lost. In an effort to preserve this property and raise awareness about its historical significance, the National Trust decided to include it as one of this year’s America’s 11 Most Endangered Historic Places.”
Atlanta’s Sweet Auburn Historic District was once known as the “richest Negro street in the world.” The historic African-American neighborhood includes the birth home of Dr. Martin Luther King, the King Memorial, and the original Ebenezer Baptist Church, the church where King and his father preached.
“Sweet Auburn Historic District was selected because of its great historic and cultural value,” said Joe McGill, field officer for the Charleston field office of the National Trust for Historic Preservation. “The district was a symbol of African-American prosperity in Atlanta during the Jim Crow Era and is the birthplace of Rev. Martin Luther King, Jr. We have the opportunity to help revitalize the commercial corridor, so that it is once again a thriving part of the Atlanta community.”

Although boxing great Joe Frazier—a gold-medal winner at the 1964 Olympics and later the Heavyweight Champion of the World—died last year, his legacy is living on in various ways, including a gym he founded and ran. The National Trust felt the gym of this legendary champ was worthy of being placed on the list. The modest three-story building on North Broad Street in Philadelphia was where Frazier lived and trained for his legendary fight against Muhammad Ali. “Today, the converted warehouse space where Frazier perfected his technique is home to a discount furniture store and two floors of vacant space. Despite increased interest in commemorating Frazier’s life following his death last year, the gym is currently unrecognized and unprotected; it enjoys no formal historic designation at the local or national level. The building is also for sale. Without designation, the building could be sold to new owners who may significantly alter or demolish it,” says National Trust spokesperson Jessica Pumphrey. “Joe Frazier was a sports legend, and he deserves a place that celebrates his legacy and his contributions to the sport of boxing. Placing Joe Frazier’s gym on the local or national Register is a fitting tribute to one of the greatest athletes of all time.”

With so many places in America that could be consisted historic and endangered, there is a process the National Trust follows to narrow down the sites each year. “The National Trust receives scores of nominations each year from people and preservation organizations who advocate saving places that matter to them. Field office and national staff members review the nominations and determine the final 11 listings. We do not reveal the total number of applications we receive, but it is a competitive process and applicants are in good company,” says Pumphrey.
Being on the list heightens a site’s visibility and hopefully helps protect it from destruction and ruin. “America’s 11 Most Endangered Historic Places list is a powerful tool for raising awareness about endangered sites and galvanizing local preservationists and organizations to help save sites around the country. Placing historic sites on the list often changes the dynamic of a threatened place. Sometimes, the listing of a site on the list has quickly helped communities to rescue a treasured landmark. In other cases, it has been lend momentum to preservationists engaged in a long battle to save a historic place. Of the 242 sites that have appeared on the list over the past 25 years, only a handful have been lost,” explains Pumphrey. “The National Trust works with local preservationists and community organizations to take on-the-ground action to preserve and enhance historic sites that appear on the list. The National Trust and its local partners develop and implement initiatives to save these endangered places based on the individual challenges and opportunities at each historic site.”

How the IMF wrecked Jamaica