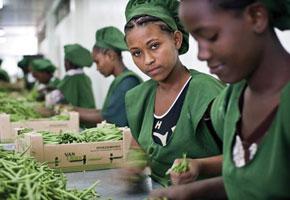 Will Africa Be the Next China?

According to a report by the African Development Bank, the Organization for Economic Cooperation and Development, the United Nations’ Economic Commission for Africa and the UN development agency UNDP, the African economy is expected to grow 4.5 percent this year  .


If this trend continues, the new growth can open new international trade doors for the continent. “Africa is not going to be a forgotten continent. This is a new beginning and it is going to change Africa forever. Nothing to stop the growth; it will be modern and will be a power player. It has the resources, the man power. It will be a new investment destination,” notes Ethiopian businesswoman Wossene Bowler, CEO of Ethiopian importing firm New Awakenings Coffee, which offers top grade coffee directly from Ethiopia.
There are various reasons this report is a plus for Africa, notes Dennis Bowler, an American businessman: “These are the forces propelling African economic growth: 1) quest/need by the West (and India and China) to discover and develop raw materials; energy oil, gas (Hydro-electric), precious metals, and agriculture; 2) cheap, yet dynamic and educated urban (youthful) labor force; and 3) governments that are embracing more democracy and deviating from the longstanding tribal dictatorships and totalitarian regimes that have wasted resources in the past,” he points out. “The labor forces that exist today are youthful (average are 45 percent, below the age of 30), educated, Internet- savvy and upwardly mobile.”
But Africa must be prepared to take advantage of future global opportunities. “There needs to be the realization that an alliance with the West, as well as with the emerging markets like Japan and China will shorten the learning curve and propel growth for the modern globally-minded population,” says Kenyan-born Gitonga Kanampiu, president, Nonprofit Development Alliance, an accounting and nonprofit consulting business in the U.S. “Various countries can partner with developing nations and form true partnerships. Each has something the other doesn’t have. The continent has untapped resources and the West has the know-how, e.g. technology. It’s a win-win.”
Dennis Bowler agrees. “All the countries can benefit from investment. There are so many opportunities. Before it is too late and before Africa becomes the most expensive continent, it is better to go and grow with the African continent. That is the only way other countries can sustain the growth,” he says.
Adds Wossene Bowler, the world is finally recognizing the potential for Africa. “All Western countries in the past were not focusing on Africa. All the raw materials which we use every day, from precious stone to commodity products go around the world from Africa,” she says. “But most of the western countries don’t know the potential or they don’t  want to invest in or develop Africa because they are spoiled with the opportunities and market share they have with each other. After the economic crises and China’s expansion, the Chinese and the Indians were forced to look for other areas. Of course they went to Africa. This created unbelievable economic growth in Africa. For example in Ethiopia only 20% of the farming land is being used. Ethiopia has lots of land and the climate is conducive to anything you want to invest in. Very rich in minerals. They found natural gas, oil, precious stone, marble and uranium…The problem was infrastructure which the government is working on. Students who were educated in America and other countries returned back home, they saw the potential of their own countries and started investing. Also, the government started inviting foreign countries to invest. As of now the only country that is not taking advantage of the station is America and American investors… Africa is going to be the next China.”