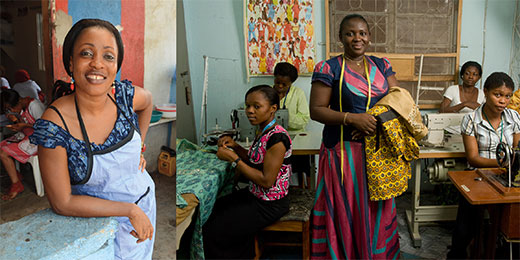 Fashion designer Tanya Aab says she feels lucky: Few businesswomen from Swaziland can travel to the United States to learn how to build their companies and sell their brands overseas.
For several days this week, Aab was walking through the Los Angeles garment district as part of a State Department program aimed at helping African countries build their economies and rely less on U.S. foreign aid.

“You can really expose your brand,” said Aab, 32, who runs a company called Arrum Lilly in her hometown of Mbabane. “It is absolutely fantastic,” she said, to be learning and traveling with women from other African countries.
She is one of 47 women from 37 African nations sponsored by the State Department under its program for female African entrepreneurs. The annual event began three years ago after the agency found that a 2000 law to help build the economies of African countries had been tapped mostly by men.
The African Growth and Opportunity Act gives duty-free status to specific African exports, especially textile and garment products, and increased access to U.S. credit.
African businesswomen could be a key economic force in their countries, especially since females make up 85 percent of the household consumers in African nations, according to the State Department.
“Women who run small and medium businesses are accelerators for economic growth and jobs creation,” said Melanne Verveer, U.S. ambassador at large for global women’s issues.
So why aren’t they taking advantage of the 2000 law? “Their businesses aren’t export-ready,” Verveer said.
African businesswomen face a number of barriers in expanding internationally, she said, including access to credit and financing. They don’t move in the same networks and don’t have the same contacts or mentors that men have. And, in some places, they “can’t enjoy property rights and inheritance.”
Verveer said the lack of a middle class was a significant hurdle to economic development in many African countries.
“This ‘missing middle’ is where genuine growth and job creation and opportunities for societies really lie,” she said.
Overall, African countries have increased total exports to the U.S. steadily since the federal law took effect in 2000. That year, the value of exports from Africa soared 62 percent from the previous year to $27.6 billion. It more than quadrupled to $113.5 billion in 2008.
The worldwide recession gutted exports by 45 percent, but the value bounced back to $93 billion last year, according to the U.S. Census.
The 47 African women arrived a couple of weeks ago in New York, where they got advice from fashion designer Diane von Furstenberg before they split up to go to various cities. Aab’s group of 15, which included women running fashion-design and home-decor firms, headed for Los Angeles. They continued Wednesday to Washington, D.C.
Aab’s timing couldn’t be better for her business. Interest in African fashions has surged with First Lady Michelle Obama and celebrities, such as singer Beyonce Knowles, wearing clothing created by African designers. And Aab wears clothing she designed herself as she meets with L.A.’s fashionistas.
Among those Aab and others met was designer Tina Tangalakis, who had quit her job and in 2009 went to Ghana, where she fell in love with the homemade fabrics. She created her company, Della, in Los Angeles to sell a line of fashion accessories produced by the women of Ghana.
It’s the kind of story that the African businesswomen are hoping they can write for themselves. But it’s not just serendipity. At the nonprofit Fashion Business Inc., the women learned about branding, working with investors and controlling growth, among other topics.
What Aab took away was the likelihood that the more people the African women met, the more likely their businesses would find ways to export their goods to the U.S. and beyond. She plans to share her new connections and ideas with other Swazi businesswomen.
“Honestly, it’s contacts,” said Aab, who has seven employees at her company. “In Swaziland, it’s hard to stand up on your own, to be trusted as a woman entrepreneur.”
Some of Aab’s colleagues on the trip already export home decor, garments and agricultural products to other African countries, but they want to expand into other continents, including North America.
This would require some major shifts in business strategies for some of the women. Kenyan custom designer Monica Kanari, for instance, is trying to figure out how to make her designs work in the ready-made clothing business — an essential step before she can export.
“It’s taking my business to the next level,” Kanari, 40, said of the training she’s receiving.
Nigerian-born Adiat Disu helps to promote U.S. imports of African luxury items through her consulting and public relations firm Adiree in New York.
“Things that are made in Africa are beautiful and luxurious,” she said. “Designers are tapping it and sourcing from these countries.”
And businesses that give back to the community — Della provides training for its Ghana suppliers and sewing classes to children at a nearby orphanage — are growing in popularity, Disu said.
Aab wants to add a similar element of social responsibility to her business as well, with a focus on improving schools and increasing environmental awareness in Mozambique.
“I want to expand it one day into something more than fashion,” she said. “I want to make awareness fashionable.”