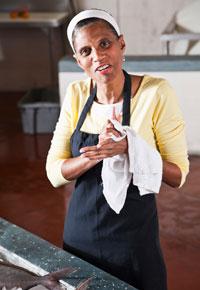 The true measure of wealth in a community is in its ability to produce those willing to “be” the return on the investments that others made before them. Today’s African-American business owners provide this return by garnering a sense of pride and productivity in their communities, giving young people a direct object of aspiration and, more practically, providing a place for (often) disenfranchised people to secure employment. A community with multiple small business owners can actually be seen as a sign of a healthy community.

A glance at American history uncovers the reality that business ownership has been a relatively bleak road to wealth for the African American. Today’s aspiring entrepreneur, however, has a road well-lit with the lessons taught from pioneers and recent successes. Another sign of a healthy community is the presence of the past. In other words, the youth and emerging leaders will commemorate those who have pressed through difficult times and beat the odds.
Statistics speak louder than ambition most times and the statistics say that a quarter of all businesses fail within the first year of operation. As time progresses, the failure rates increase; by the tenth year in business, nearly three-quarters of businesses have failed. Black-owned businesses will have first-year failure rates of approximately two to five percentage points hire than the national average. The number grows exponentially as the ten-year mark is reached. Most potential business owners will shun opportunities because of difficulties in getting start-up loans.
Keeping that in mind, we want to highlight a few businesses in the Kansas City area that kept their dream alive, went forward through adversity and made brilliant decisions and stayed alive during difficult times:

Arthur Bryant’s restaurant stands out as one of the oldest and most famous restaurants in Kansas City featuring barbeque cuisine. It was founded in 1930 and has entertained prestigious and common guests alike.
One other barbeque hot spot would be Gate’s Barbeque. It was established in 1946 and continues to thrive as one of the best in Kansas City.
The Call newspaper was established 1919 and has served as an informational and news guide to the black community since then.
Ralph C. Johnson & Company was established in 1971 as a certified public accounting firm.

Unified Tek Corp. was established in 2001 and serves the technology needs of the business community.

Control Environment Products was established in 1991 and is a valued supplier of janitorial, cleaning and medical supplies.
Custom Engineering was founded in 1974 and provides mechanical services.

These businesses have plowed through significant events in recent history. Events that have negative effects on the economy will usually cripple any start-ups or struggling businesses. The first decade of the twenty-first century has been tumultuous (to say the least).
Many of them have braved the Y2K craze of the late 90’s. As people ramped up in defense to much-prophesied societal fall-out, these businesses kept a cool view of the future before them and continued with business as usual. (No doubt, a few of the businesses were perhaps spawned by the craze itself.)
These people would have passed through and survived one of the worst financial crises in recent American history as well as weathering post-9/11 economic contractions. September 11, 2001 is a day that most Americans will never forget. But most forget how the economy staggered briefly causing some harm to commerce.
All of these companies have opened before there was a YouTube. Nothing went viral (with a commercial attached). YouTube, Facebook and other social media outlets are arguably the top-most used sites for competitive exposure. You Tube didn’t come around until February of 2005.
They survived a crippling inflation in the price of gasoline. Just before the recent economic collapse fuel pricing were jacked to (then) staggering rates in the wake of alleged shortages in the middle east. This would affect travel and companies that depend on them as a vital part of commercial operation.
They saw the first African-American elected to president of the U.S. They currently face a jittery public infatuated with threats of phantom conspiracists. Conspiracy theories encourage fear in general and impose a less-than-normal hue on outlook. Consumer outlook has a drastic effect on business.