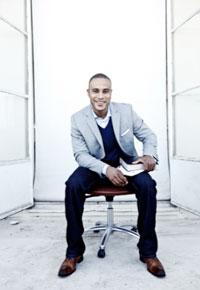 Devon Franklin is an ordained preacher, published author and recently was promoted to Vice President of Production at Columbia Pictures—a division of Sony Pictures Entertainment. He has worked behind the scenes of major productions such as The Karate Kid, which grossed over 300 million worldwide, Jumping the Broom, Pursuit of Happyness and most recently Sparkle starring the beloved Whitney Houston and Jordin Sparks. Franklin credits all his success to God and doesn’t let his accomplishments in Hollywood get in the way of his Christian faith.
Devon’s latest book Produced by Faith details his journey to success in show business without compromising his faith “one of the reasons I wrote the book was to demonstrate how faith really works,” he explained. Devon recently spoke with tnj.com to discuss his new position at Columbia while offering advice to young African American entrepreneurs.
Tell us about your journey to becoming vice president of Columbia Pictures.
I started as an intern in college. I interned for a management company that managed Will and Jada Pinkett Smith, Sean Combs, Jennifer Lopez and a bunch of other incredible talent. I interned my four years of undergrad, when I graduated I became an assistant at Will Smith’s company. I did that for about a year and a half and then Tracey Edmonds gave me my first executive job in film. After some time, I left there to go to MGM (Metro-Goldwyn-Mayer) and MGM was my first studio job and about 6 months into being there, they sold the company to Sony. I came over to Sony as part of that overall transaction and I been at Sony for 7 and a half years and just recently I got promoted to vice president.

Tell us about your job description. Can you green light films?
No. Only the chairman has green light power, Michael Lynton and Amy Pascul. My job is to report to my boss who is the president, I bring materials, I say “this is what I like,” and if he likes then we both advocate to the chairman that they should green light it.
What’s your work schedule like, how are you able to travel and simultaneously promote your new book “Produced by Faith” while being the vice president?
Here’s the good thing about one being an executive there’s development and there’s production and then there’s post production, right now I’m in development season. So scripts are being written and I’m waiting for scripts to come in, so that freezes up some time.  Plus most of my traveling is on the weekends.

Did you ever have a moment where you doubted yourself as you were moving up?
Yeah, absolutely! Part of overcoming that is going back and remembering all that God has brought me through, and then trying to get prospective in whatever moment I’m in and ask myself ‘am I blowing this out of proportion?’ Sometimes we have a limited perspective of whatever moment we are in; sometimes I have to get the bigger perspective to remind myself that I just have to push through this.
How can one go about figuring out the career path that God has for them?

When you close your eyes and visualize the version of your life that brings you peace, what does that look like? It also starts with a prayer, you have to really pray and seek God and his will. I would encourage someone who is in a difficult time and needs guidance to fast it has incredible power. Remember to ask yourself, what do you do well with the least amount of effort? What are you naturally drawn too? What are you passionate about? There’s no one thing, it’s a combination of things. Some people know immediately what they want to do, but you have to seek and search out that purpose. I know that for me I didn’t understand immediately, but I had to ask myself ‘what am I passionate about?’ Once I understood that, the question was ‘why do I have these gifts and what am I going to use them for?’ It is one thing to figure out what you want to do, the other questions is why do you want to do it? I see a lot of people in their gifting but aren’t clear on their purpose.
With that said, how do you know when you’re going down the wrong career path and going against your purpose?
For me when I was directing my own life without God, nothing I did worked. I caused more confusion, I caused more frustration, the more I thought I was moving forward I actually wasn’t, I had no confidence. The moments I took over, I would mess up because I’m doing things out of His timing. There was no order. A lot of times when we take the directors chair away from God, we enter a season of frustration and confusion. We think we know better. How can we direct our lives when we didn’t create the story? There are things you can’t bring into your life unless you let God do it.
You recently mentioned that you were celibate for over 10 years and remained committed to your purpose. Why do you think that is such a big controversy?
Anything that goes against the norm will be lauded or ridiculed. It doesn’t make it any less true. You have to decide what you want out of life, and then you have to make decisions based off what you want. I see people say what they want then they make decisions that go against that. For me personally, Heaven forbid that there’s a purpose on my life that depends on me honoring God in everything I do, Heaven forbid I choose not to honor Him in some area of my life and it prevents me from reaching my purpose. At the end of my life could I reconcile never becoming who I was suppose to because of certain personal choices I made. Would those choices have been worth it? I sacrificed that because I didn’t want to stand in the way of what God created me to do and if that calls me to be ridiculed then so be it.
In your book you touched on the moment of frustration in your life. There’s a scene where you are in the bathroom stall of your job crying out to God. What advice do you have for the young African American entrepreneur who may be in the same season of frustration?
On a spiritual level, you have to remember to ask this question, ‘Okay God, why are you sending me through this?’ In the frustration of not being where you want to be and not seeing how you are going to get there, you can lose the reason you’re in the moment to begin with. What I realized in that bathroom moment is that there are things I needed to learn that were critical to what I’m doing now. So those critical moments are there to prepare you for what’s coming next. On a practical level, look at everything that you’re doing: are you doing the most that you can, how is your rolodex, who do you need to meet, who have you not met yet? Every single day you have to wake up and go after it, and you also have to understand patience. There are some things that just take time, you have to be forgiving of yourself, and you cannot beat yourself up. That development time is good because when you have that foundation and you been through some stuff and you learned from it, when you are where you want to be, you will have the knowledge and wisdom and the mindset to be able to manage it better, had you not gone through what you’ve been through.