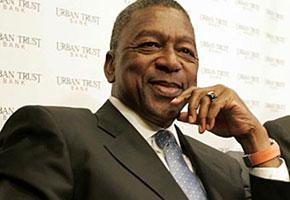 The founder of BET, the first cable television network specifically targeted to African-Americans, is rolling up a pair of small video firms to form a new publicly traded venture, RLJ Entertainment. The 66-year-old entrepreneur plans to create an online distribution company that syndicates programming, including titles made by producers and directors who have been unable to penetrate the barriers of Hollywood.
“The Internet changes that paradigm,” Johnson said in an interview last week. “The gatekeepers have been, for practical purposes, disassembled. If you can identify and curate the content, there is nothing keeping you from reaching a global audience.”
The usually press-shy businessman plans to merge one of his investment vehicles with two small video distributors, Image Entertainment and Acorn Media Group. The companies hold rights to an eclectic mix of programming, including Agatha Christie films, British comedies, horror movies, exercise videos, urban entertainment and the work of stand-up comedians.
Johnson said the new venture would acquire other film libraries and would license its programming on DVDs and streaming services such as Netflix, Hulu and Amazon.com.
Johnson launched BET, which stands for Black Entertainment Television, in 1980. The channel started with very few shows, including a gospel music series and a video music program with a set so flimsy that the host’s podium once collapsed on the air. But the channel grew and thrived. Media giant Viacom acquired BET in 2003 for $3 billion.
The cable pioneer believes his new venture could be quite lucrative too. He sees striking parallels in how small cable TV networks invaded an industry long dominated by three powerful broadcast networks, providing new opportunities for entrepreneurs like him and diversified programming for viewers.
“I am absolutely convinced that the only thing keeping minority creative people from getting their content to a hungry audience is access to capital,” Johnson said. “I’ve made a lot of money, but if you look at the businesses I have, you’ll see they all have a heavy dose of a focus on finding talented minorities and giving them the opportunity to ride the elevator up with me.”
Darnell Hunt, head of the Ralph J. Bunche Center for African-American Studies at the University of California-Los Angeles, gives Johnson high marks for giving talent a lift.
“He gave exposure to black artists when others wouldn’t. BET showed Michael Jackson videos when MTV wouldn’t,” Hunt said.
But Johnson has also been criticized by some African-American leaders who felt that BET’s programming spotlighted offensive images of black people. They accused him of putting money above social responsibility by stocking BET with music-related shows, including hip-hop videos that stressed materialistic possessions and sexual prowess.
“People wanted BET to offer alternative images of African-Americans that were not being shown on the mainstream network,” Hunt said. “They wanted scripted programming, public service programs.”
The problem, Johnson said, was that BET was the only game in town. “We got all of the praise and all of the damnation because we were the only ones. I was criticized for not delivering what the market considered to be the appropriate content for a nation of black Americans crying out for positive content. But positive is in the eyes of the beholder. It wasn’t my responsibility to be the guy.”
The Internet, Johnson said, is different. “There will never be the only one with the Internet.”
After Johnson exited BET in 2005, he formed investment companies with diverse interests. He led the group that put together the Charlotte Bobcats professional basketball team. Johnson’s lodging trust bought and manages hotels.
Six years ago, he started Our Stories Films, an effort to give movie-making opportunities to minorities shut out by the major Hollywood studios. The label has released two films in an alliance with Weinstein Co., including last year’s profitable “Jumping the Broom.”
Nearly two years ago, Johnson formed another investment group to acquire media companies. It will use about $140 million in capital the group raised to buy Acorn Media in Maryland and independent distributor Image Entertainment in Los Angeles.
Acorn Media, which began as a documentary film production and distribution business, is now a leading distributor of British television programming in the U.S. and Canada, including a library of Agatha Christie films and fitness videos. The deal gives Acorn shareholders nearly $105 million for their equity.
Investors in Image Entertainment, which has had a troubled financial history but boasts a library of more than 3,700 titles, including “Time Bandits” and “The Witches of Oz,” will receive $22.6 million. Image Chief Executive Ted Green plans to stay on to run the new company, which is expected to generate about $240 million this year in revenue. The new company is being valued at about $194 million, according to regulatory filings.
No longer on Forbes’ list of billionaires, Johnson splits his time among West Palm Beach, Fla.; Charlotte, N.C.; and Bethesda, Md. He will retain an 11 percent interest, making him the largest individual shareholder of RLJ Entertainment. Image investors will hold about 11 percent, and Acorn investors will have 5 percent. Cash from the offering will fund operations and other acquisitions.
Johnson describes himself as “agnostic” about the kind of content RLJ Entertainment will feature. “As long as it is legal and is not porn,” he said. Eventually RLJ may launch a subscription Internet service, for which consumers would pay about $5 a month to see movies made by African-Americans.
“Because I happen to be African-American, I have a deep sensitivity and a financial reason for unlocking that creativity,” Johnson said. “And that creativity generates a lot of money.”