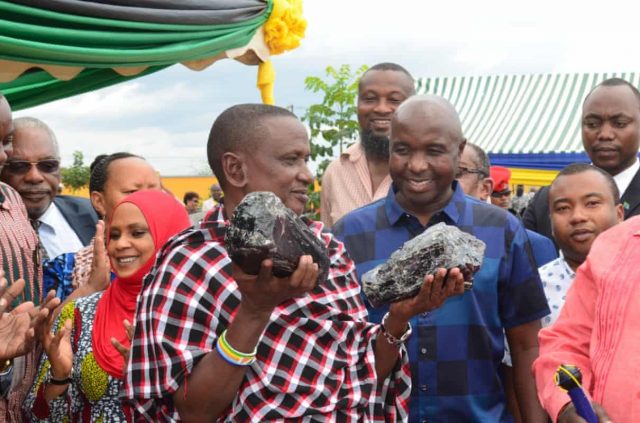 Saniniu Laizer is pictured with the tanzanite gemstones, which have a combined weight of about 15kg. Photograph: Tanzanian government

A Tanzanian mining boss has earned more than 7.74bn Tanzanian shillings ($3.35m) after workers at his operation in the east African country found the two largest tanzanite gemstones ever recorded.

The two dark violet-blue gemstones, each about 30cm long and 10cm thick, were discovered by miners employed by Saniniu Laizer in a mine in the north of the country.

“There will be a big party tomorrow,” Laizer, from Simanjiro district in Manyara, told the BBC.

“I want to build a shopping mall and a school. I want to build this school near my home. There are many poor people around here who can’t afford to take their children to school,” he said.

Local and international reporting of the find has described a rags to riches story, with a “subsistence miner” said to have “hit the jackpot”.

However, Laizer runs a substantial mining operation involving more than 200 people, which he has funded with the profits of his extensive cattle and farming businesses, and was not present when the record-breaking find was made.

“He has logistics experts, engineers, geologists who help him in the planning of the operations. He doesn’t himself go to the pit to dig. He has a number of tried labourers who … do the mining,” a manager, Kiria Laizer told the Guardian.

“It’s a really challenging experience. It’s tough of course, working in this dusty area. We inhale a lot of dust and get sick, but we haven’t lost the determination to work. We feel grateful that our boss has finally got these stones. We are planning to have roast meat together when we return to the mining site.”

The first gemstone weighed 9.27kg and the second 5.103kg, a mines ministry spokesperson said. Both were found last week, but the discovery only became known when Laizer sold them to the government on Wednesday. He said that 10% of the earnings from the sale of the stones will be distributed among the workers.

Laizer was pictured on Tanzanian television being presented with a large cheque. President John Magufuli phoned to congratulate him live on TV.

The president reportedly ordered officials to buy the two gemstones and place them in the national museum in the commercial capital, Dar es Salaam, where tourists can admire them. “This is a confirmation that Tanzania is rich,” Magufuli said.

Tanzanite is found only in a small northern region of the east African nation. It was first identified in 1967.

Tanzania built a fence around tanzanite mining concessions in northern Tanzania in April 2018 in an attempt to control illegal mining and trading activities. At the time, officials said 40% of tanzanite produced there was being lost.

The biggest previous tanzanite find was 3.38kg stone found by a commercial mining company 15 years ago.

Many artisanal miners are not officially employed by any mining companies and usually mine by hand. Tens of millions of people across Africa depend on revenues from the activity, despite its dangers.

Last year Tanzania set up trading centres around the country to allow artisanal miners to sell their gems and gold to the government, a step encouraged by campaigners seeking to improve conditions in the industry.