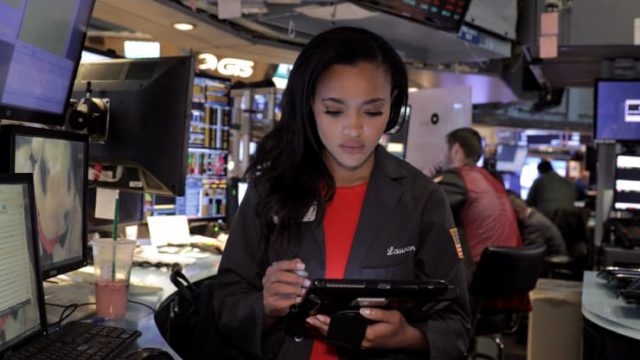 Working in an industry where you are one of very few women can be challenging enough — but imagine what it’s like to be the only woman on staff.

That’s the case for New York Stock Exchange trader Lauren Simmons. The 23-year-old is an equity trader for Rosenblatt Securities, and she is both the youngest and the only full-time female employee to hold that position at the NYSE.

“When I tell people what my job is they are always surprised,” she tells CNBC Make It. In fact, Simmons says that if you had told her five years ago that she’d end up working on Wall Street, she wouldn’t have believed the news herself.

Simmons moved to New York after graduating from Kennesaw State University in December 2016. The Georgia native had interned at a local clinical treatment center in college while earning a BA in genetics with a minor in statistics. She had planned to pursue a career in the medical field, but after realizing that medicine wasn’t her passion, she started searching for opportunities in other industries.

Simmons started applying to positions in finance — she had loved numbers since high school — and eventually secured her current position at Rosenblatt Securities by applying to an opening posted on LinkedIn.

She started her role in March 2017, but says her employment was contingent upon passing the Series 19, the exam all floor brokers must pass to earn their badge.

The exam is rooted in financial principles and concepts. Despite her math background Simmons had not studied finance in college, and had to hit the books — hard. When she passed (“It shocked everyone”), she says it eased her doubts about whether she could manage the role. It also proved to the men on the floor that she was equipped to work alongside them.

“When I see statistics that say ’80 percent don’t get through,′ I look at the 20 percent,” she says. “So when everyone kept saying, ‘It’s a hard test. Don’t worry if you don’t pass,’ for me, I needed to pass to prove to myself that I could do this.”

In 1967, Muriel Siebert became the first woman eligible to trade on the floor. At the time, there was no women’s restroom, so the exchange built a single bathroom booth on the floor. “That’s a ‘fun’ story they told me when I got my badge,” says Simmons.

Since then, the booth has been removed to create necessary space for new computers and large display screens. There is now a dedicated women’s bathroom — but it’s further away than the men’s room.

Simmons also says the iconic jacket traders wear on the floor is not designed with women in mind. “They only come in men’s sizes, unfortunately,” she says. “I do have some that have been tailored, but there are like 10 pockets on the jacket so when you do tailor it, it just does this weird thing.”

Peter Tuchman
Peter Tuchman, famously one of the most photographed traders on Wall Street, has been with the New York Stock Exchange since 1985 when he landed a summer job as a teletypist. He describes the environment on the floor then as very family-oriented — it was not uncommon to see someone’s father or grandfather also working there — but there were very few women.

“It’s a bit of a men’s club, and it has always been that way,” he says. “Why are there no women in this business? It’s because men suck.”

Tuchman says men on the floor do tend to interact and communicate in ways that are not always friendly to women. “It’s like a locker room in a certain way,” he says. “Men use language they probably shouldn’t use. It’s a lot of screaming, yelling, and it’s super high stress. It’s not that women can’t deal with high stress, it’s just not where women went.”

Once you develop a workplace culture dominated by men, Tuchman adds, it’s hard for women to feel welcome. He says it’s time for that to change.

“We see it in every part of corporate America and we’re seeing it even more now with #MeToo,” he says. “The environment towards women still hasn’t changed in so many respects — and it must change.”

Futures and options
Though the trading floor may still look largely like it did 50 years ago, there are signals that change is on the way. Earlier this month, Stacey Cunningham was named president of the NYSE. A one-time NYSE intern, Cunningham will be the first woman to helm the exchange since its establishment in 1792.

“I’m so excited,” says Simmons. ”[Cunningham is] as qualified as any other man, and probably even better. I really do believe that new changes are coming. Hopefully with her being the new president, and you know even my story, that will encourage other women to come down here as well.”

Simmons says the best advice that she can give to anyone trying to prepare for a career on Wall Street, especially women, is to not limit themselves.

“Be uncomfortable and go after what you want,” she says. “Apply for the job — you have no idea what lies behind the door. And if you don’t get the job, it’s OK. Apply for the next job and move forward. Don’t let that be a stop in your career, your life or whatever you want to do. I think it’s important to just keep going.“