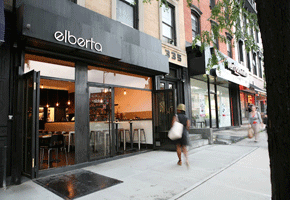 Erwin Caesar believed in his entrepreneurial dream so much he funded it with his own funds, including his retirement savings.
The dream? To open a neighborhood restaurant with his wife, Dr. Erica Phillips, in Brooklyn that would also become a hot spot for people from all over looking to dine on innovate cuisine in a cozy yet chic setting. The result is Elberta Restaurant & Bar, based in Prospect Heights, Brooklyn. Serving New American cuisine, the restaurant has a progressive and creative menu, crafted by Chef Kingsley. Diners can get dishes such as the Sorrell BBQ Lamb Ribs or the Octopus with heirloom beans and pickle tomato.

“We love the energy of Brooklyn,” says Caesar. “More so than any other part of New York City, Brooklyn has an optimistic vibe, full of cultural diversity and opportunity. I feel it is the best borough in New York to start a small business.”  But the dream is challenging as both husband and wife have demanding full-time jobs. Caesar is a fill-time management consultant; his wife, a doctor.
As a couple, they frequented coffee shop at a well-known coffee shop, then called Heights Coffee. When the owner was looking to expand the Caesars invested. Soon, they realized that they loved being in the restaurant business and ultimately bought out the originally owner. And in July 2012, Caesar and Phillips launched Elberta, after a full-remodel and hiring of a new staff. “We wanted to have a place that not only the locals would feel comfortable in calling their own, but also attract customers from all over,” notes Phillips. Thus, while the atmosphere is definitely cozy, the decor is chic and sleek. The food is innovative but familiar. And the added perks of unique cocktail  concoctions and occasional live music, Elberta stands out from the other restaurants in the area. “We wanted to create a complete experience,” explains Caesar, “from the moment someone walks through the door we want them to forget all the stresses of their day, sit back and enjoy every aspect of Elberta.”
Located a stone´s throw from the new Barclay´s Sports Arena, Elberta is also a great place for pre-game or post-game dining.  “This is a dynamic neighborhood. Such a great mix of cultures,” says Caesar. “It truly is quintessential New York.”
Caesar has always has a passion for food—and for entrepreneurship. Born ins Guyana, he  migrated to the U.S. when he was eight in 1983. He lived in and fell in love with the Borough of Brooklyn.  He always knew he would wanted to develop a business in the area. “I think it is the best place in New York City for a small business to thrive,” he says. A work ethic was instill in Caesar early on. “I was always working. I had my first job at the age of 11; I‘ve always had a job and very good jobs along the way. There is a special dignity about working. I truly came from the bottom up. “
Business aside, Caesar has  experienced many personally trying times—economically and emotionally.  “I remember wearing my father’s shoes and sneakers to school because my parents could not afford new ones,” he recalls. One of his brothers, Lloyd Caesar Jr., died of AIDS in 1996 and his sister, Maxine Caesar, died of cancer in 1999. But the father of two has always strived to use his personal tragedies to help others. He is very vocal in AIDS Awareness, Gay rights as well as support for more cancer research.
And he has reached his goal: To be a successful business owner. And he has major plans for the restaurant–He sees branding Elberta and opening two more locations. “We have a vision. We built the business to reflect our values and not make a quick buck. Our attention to quality food, service, and a homey environment is what sets us apart from the competition. My wife and I have put our hearts and soul into our business.,” he says.
Erica Phillips is a modern-day woman. She not only has pursued and thrived in her own profession but she is also a nurturing mother, supportive wife and now an entrepreneur. Born in Brooklyn, like her husband, Phillips is of Caribbean descent. She spent summers in St. Vincent with her grandmother.
If running a restaurant wasn’t enough, Phillips is a full-time medical practitioner at Weill Cornell Medical College- New York Presbyterian Hospital. Having studied at the University of Virginia, Columbia University Medical School, and Cornell University, she is also Associate Professor of Clinical Medicine. Her medical focus:  “To reduce health disparities and enhance the health of disadvantaged communities.”
While she is struggling to manage a demanding career and being the mom of a a 27-month old, she is excited about Elberta—even with all the extra hours she has to pull. “We have a great babysitter and so I am at the restaurant at least three nights a week to greet the customers and make them feel welcomed,” says Phillips.
“We want to be part of our community and we want people to feel like Elberta is their second home, while also giving them a unique dining experience.”

How To Start A Bakery: A Simple Guide To Get Started