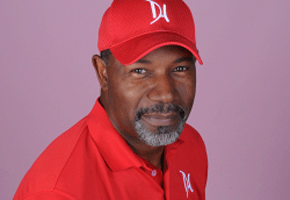 Many people know actor Dennis Haysbert from his role as the President of The United States in the mega popular, long-running series “24.” Or as the handsome philanderer in the hit film “Waiting To Exhale.”  But besides these and the countless other film and TV roles he has under his belt, Haysbert is dividing his time between acting, producing and launching his golf and yoga apparel brand, DH6 Gear.

Launched in 2010, the line includes various gold apparel and accessories and yoga wear. “A couple of years ago things had slowed down quite a bit for me as far as acting. And I changed management teams,” says Haybert, who is currently filming a new feature film, “Sin City 2; A Dame to Kill For.” Together with his new manager, he came up with the golf wear line. “I am a workaholic in a business that it is difficult to be a workaholic in,” says Haysbert. “I am always looking for something to do. I golf, and I know what golfers need, so I created DH6 Gear.”
DH6 products are sold exclusively through the Dennis Haysbert website, though Haysbert says there are future plans to sell the products in stores and at golf clubs. Initially, Haysbert wanted to focus on golf. “But many of my female fans sent me messages on Facebook asking where the clothes were for women. So I created the yoga line,” says Haysbert, who has dabbled a bit in yoga. “I have done a few poses and I want to start doing more. I like to stay flexible—and I need to fight off old age,” he says with a laugh.
Haybert funded DH6 Gear with his own money and has total ownership of the products and company. “I wanted to maintain control,” says Haysbert, who uses local apparel makers, hat makers and a fulfillment center. “What I am most proud of is that every item is 100 percent American made.”  Haysbert is very hands on with DH6. He even designed the logo. “I came up with the idea for the logo and just put it together,” he says.
Among the items for sale are men´s golf polos, jackets, hoodies and hats as well as yoga wear. “I may start a line of golf clothes for women soon,” he adds.
Besides developing DH6 gear, Haysbert has been busy again with various film projects, including two he is currently  developing—a drama film and a sci-fi film. “I don’t think I will ever stop [acting and developing films],” he says. “I still have so many stories inside of me I want to tell. I just want to keep moving.”