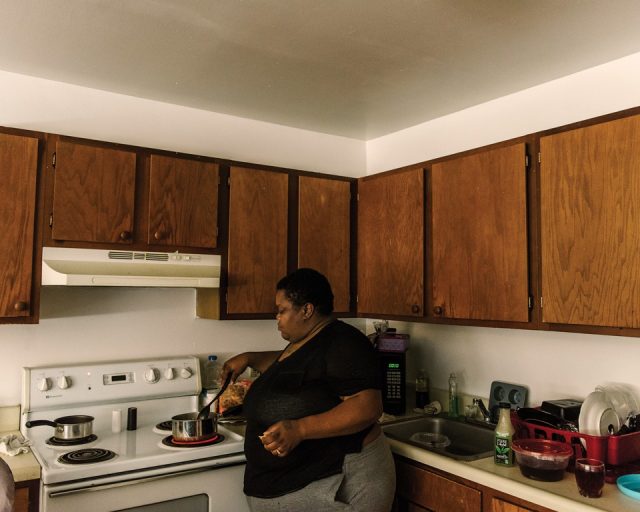 The writer: Olga Khazan
Date first published: July/August 2018
One morning this past September, Kiarra Boulware boarded the 26 bus to Baltimore’s Bon Secours Hospital, where she would seek help for the most urgent problem in her life: the 200-some excess pounds she carried on her 5-foot-2-inch frame. To Kiarra, the weight sometimes felt like a great burden, and at other times like just another fact of life. She had survived a childhood marred by death, drugs, and violence. She had recently gained control over her addiction to alcohol, which, last summer, had brought her to a residential recovery center in the city’s Sandtown neighborhood, made famous by the Freddie Gray protests in 2015. But she still struggled with binge eating—so much so that she would eat entire plates of quesadillas or mozzarella sticks in minutes.
As the bus rattled past rowhouses and corner stores, Kiarra told me she hadn’t yet received the Cpap breathing machine she needed for her sleep apnea. The extra fat seemed to constrict her airways while she slept, and a sleep study had shown that she stopped breathing 40 times an hour. She remembered one doctor saying, “I’m scared you’re going to die in your sleep.” In the haze of alcoholism, she’d never followed up on the test. Now doctors at Bon Secours were trying to order the machine for her, but insurance hurdles had gotten in the way.
Kiarra’s weight brought an assortment of old-person problems to her 27-year-old life: sleep apnea, diabetes, and menstrual dysregulation, which made her worry she would never have children. For a while, she’d ignored these issues. Day to day, her size mostly made it hard to shop for clothes. But the severity of her situation sank in when a diabetic friend had to have a toe amputated. Kiarra visited the woman in the hospital. She saw her tears and her red, bandaged foot, and resolved not to become an amputee herself.
Kiarra arrived at the hospital early and waited in the cafeteria. Bon Secours is one of several world-class hospitals in Baltimore. Another, Johns Hopkins Hospital, is in some respects the birthplace of modern American medicine, having invented everything from the medical residency to the surgical glove. But of course not even the best hospitals in America can keep you from getting sick in the first place.
It was lunchtime, but Kiarra didn’t have any cash—her job, working the front desk at the recovery center where she lived, paid a stipend of just $150 a week. When she did have money, she often sought comfort in fast food. But when her cash and food stamps ran out, she sometimes had what she called “hungry nights,” when she went to bed without having eaten anything all day.
When I’d first met Kiarra, a few months earlier, I’d been struck by how upbeat she seemed. Her recovery center—called Maryland Community Health Initiatives, but known in the neighborhood as Penn North—sits on a grimy street crowded with men selling drugs. Some of the center’s clients, fresh off their habits, seemed withdrawn, or even morose. Kiarra, though, had the bubbly demeanor of a student-council president.

She described the rough neighborhoods where she’d grown up as fun and “familylike.” She said that although neither of her parents had been very involved when she was a kid, her grandparents had provided a loving home. Regarding her diabetes, she told me she was “grateful that it’s reversible.” After finishing her addiction treatment, she planned to reenroll in college and move into a dorm.
Now, though, a much more anxious Kiarra sat before her doctor, a young white man named Tyler Gray, who began by advising Kiarra to get a Pap smear.
“Do we have to do it today?” she asked.
“Is there something you’re concerned about or nervous about?,” Gray asked.

Kiarra was nervous about a lot of things. She “deals by not dealing,” as she puts it, but lately she’d had to deal with so much. “Ever since the diabetes thing, I hate hearing I have something else,” she said softly, beginning to cry. “I’ve been fat for what seems like so long, and now I get all the fat problems.”
“I don’t want to be fat,” she added, “but I don’t know how to not be fat.”Kiarra’s struggles with her weight are imbued with this sense, that getting thin is a mystery she might never solve, that diet secrets are literally secret. On a Sunday, she might diligently make a meal plan for the week, only to find herself reaching for Popeyes fried chicken by Wednesday. She blames herself for her poor health—as do many of the people I met in her community, where obesity, diabetes, and heart disease are ubiquitous. They said they’d made bad choices. They used food, and sometimes drugs, to soothe their pain. But these individual failings are only part of the picture.
In Baltimore, a 20-year gap in life expectancy exists between the city’s poor, largely African American neighborhoods and its wealthier, whiter areas. A baby born in Cheswolde, in Baltimore’s far-northwest corner, can expect to live until age 87. Nine miles away in Clifton-Berea, near where The Wire was filmed, the life expectancy is 67, roughly the same as that of Rwanda, and 12 years shorter than the American average. Similar disparities exist in other segregated cities, such as Philadelphia and Chicago.
These cities are among the most extreme examples of a national phenomenon: Across the United States, black people suffer disproportionately from some of the most devastating health problems, from cancer deaths and diabetes to maternal mortality and preterm births. Although the racial disparity in early death has narrowed in recent decades, black people have the life expectancy, nationwide, that white people had in the 1980s—about three years shorter than the current white life expectancy. African Americans face a greater risk of death at practically every stage of life.