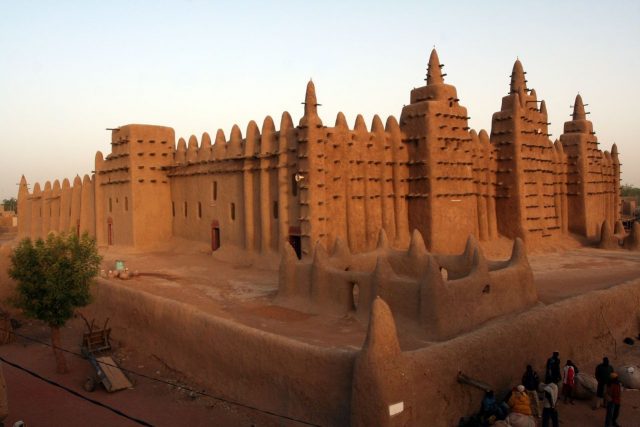 Perched on the edge of the Sahara, this West African city was a center of religion and scholarship for centuries.

This West African city—long synonymous with the uttermost end of the Earth—was added to the World Heritage List in 1988, many centuries after its apex.

Timbuktu is a city located near the Niger River in modern-day Mali in West Africa. The area around Timbuktu has been inhabited since the Neolithic period as evidenced by Iron Age tumuli, megaliths and remains of now abandoned villages. The Niger River regularly flooded the plains between Timbuktu and Segu to the southwest, which provided fertile land for agriculture, beginning at least 3,500 years ago. In particular, red-skinned African rice, along with other indigenous cereals and foodstuffs, was grown, and local deposits of copper exploited. Copper was traded via trans-Saharan routes during the first millennium CE while evidence of copper ingots cast for trade purposes date to the 11th century CE onwards. Similarly, gold was probably locally mined and then traded, but concrete evidence from this period is lacking.

It is around 1100 CE that Timbuktu was founded by Tuareg herdsmen, the nomads of the southern Sahara, as an advantageous spot where land and river routes coincided. According to one legend, the herdsmen dug a well at the site and asked an old woman called Buktu to look after it whenever they were away. In the Tuareg language, Tamashek, the word for ‘place’ is Tin and so Timbuktu derives from the name the Tuareg’s gave the place, Tin’Buktu, meaning ‘place of Buktu’. A more modern but less romantic interpretation of the origin of the city’s name is that it merely means ‘the place between dunes’. From these humble Tuareg beginnings Timbuktu would develop into an important autonomous desert port.

Timbuktu was a center of Islamic scholarship under several African empires, home to a 25,000-student university and other madrasahs that served as wellsprings for the spread of Islam throughout Africa from the 13th to 16th centuries. Sacred Muslim texts, in bound editions, were carried great distances to Timbuktu for the use of eminent scholars from Cairo, Baghdad, Persia, and elsewhere who were in residence at the city. The great teachings of Islam, from astronomy and mathematics to medicine and law, were collected and produced here in several hundred thousand manuscripts. Many of them remain, though in precarious condition, to form a priceless written record of African history.

Now a shadow of its former glory, Timbuktu strikes most travelers as humble and perhaps a bit run down.

But the city’s former status as an Islamic oasis is echoed in its three great mud-and-timber mosques: Djingareyber, Sankore, and Sidi Yahia, which recall Timbuktu’s golden age. These 14th- and 15th-century places of worship were also the homes of Islamic scholars known as the Ambassadors of Peace.

Most of Timbuktu’s priceless manuscripts are in private hands, where they’ve been hidden for long years, and some have vanished into the black market in a trade that threatens to take with it part of Timbuktu’s soul. There is hope that libraries and cultural centers can be established to preserve the precious collection and become a source of tourist revenue. Some fledgling efforts toward this end are now under way.

Religion wasn’t the city’s only industry. Timbuktu sits near the Niger River, where North African’s savannas disappear into the sands of the Sahara, and part of its romantic image is that of a camel caravan trade route. This characterization had roots in reality and in fact continues to the present in much reduced form. Salt from the desert had great value and, along with other caravan goods, enriched the city in its heyday. It was these profitable caravans, in fact, that first brought scholars to congregate at the site.

In the 16th century Moroccan invaders began to drive scholars out, and trade routes slowly shifted to the coasts. The city’s importance and prestige waned and scholars drifted elsewhere. French colonization at the close of the 19th century dealt another serious blow to the former glories of Timbuktu.

Things in Timbuktu deteriorated to the point that, though recognized as a World Heritage site only a few years before, it was placed on the List of World Heritage in Danger in 1990. But with major improvements to the preservation of the three ancient mosques Timbuktu earned its way off that list in 2005.

Timbuktu struggles to draw tourist revenue and develop tourism in a way that preserves the past—new construction near the mosques has prompted the World Heritage Committee to keep the site under close surveillance. Perched as it is on the edge of the Sahara, relentless encroachment of the desert sands is also a threat to Timbuktu.

In 2012, Timbuktu was once again placed on the List of World Heritage in Danger because of threats related to armed conflict.