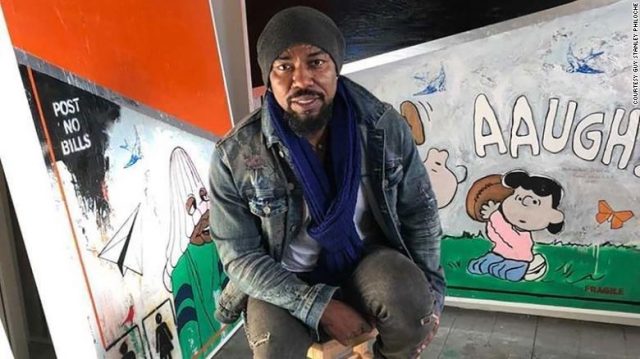 Philoche, 43, has dedicated himself to seeking out artists from around the world who are unable to make ends meet and has so far purchased more than 150 artworks for up to $500 each. His own pieces sell for up to $120,000, according to Cavalier Galleries.

“The art world is my community and I needed to help my community,” Philoche told CNN. “People say New York is dead, but it’s far from that. There’s an artist somewhere writing the next greatest album. There’s a kid right now in his studio painting the next Mona Lisa. There’s probably a dancer right now choreographing the next epic ballet. People forgot about the artists in these industries.”

When the pandemic began to affect families across the country, many people found themselves unable to pay rent, afford WiFi for their kids’ distance learning, or even put food on the table.

As the ability to afford the basic necessities slowly diminished, art became a luxury not many could splurge on. In turn, hundreds of thousands of artists and independent creators were left without an income stream in the midst of the chaos.
One of these artists was Philoche’s own friend, who just had a baby and had lost his job because of the pandemic.

“I told him, ‘Don’t worry, we’re New Yorkers. We’ve been through 9/11, the blackout, the market crash, we’ve got this,'” Philoche said. “But he was scared, so I bought a painting from him to help him get through it. It was such a big deal for him at that moment, and that’s when I realized if he’s panicking like this, other artists are too.”

In New York, like other cities across the country, galleries were shut down, art shows were canceled, and collectors began to limit their investments. So, Philoche took matters into his own hands.

On March 20, he posted on Instagram a video asking artists who were feeling the effects of the pandemic to direct message him their work. Whenever he saw a piece he fell in love with, Philoche bought it and paid for it to be shipped to his East Harlem studio.

Within months, artists from Los Angeles and Chicago to London and New Zealand — and even artists who were in prison — reached out to him with their stories and their creations.

“So many people have reached out to me, telling me the piece I bought was the first art they ever sold,” Philoche said. “It meant a lot to me. I want to help as many artists as possible, to make sure they are able to buy groceries, or pay their rent, or get their kids diapers or formula.”

When everything came to a halt

For Tara Blackwell, an artist from Stamford, Connecticut, art is her sole source of income. The only way she can survive off her art is through showing her work to collectors at exhibits, galleries, and studio visits — all which stopped because of the pandemic.

“Things were going pretty well for me and I had some exciting things coming up… and then it all stopped,” Blackwell, 43, told CNN. “The struggle to make a living as an artist is something I’ve known from a young age. I’m used to the ups and downs, but this felt different. There were so many unknowns.”

When things started to get difficult, Blackwell said one of the only forms of support she received was from Philoche.
Philoche purchased “Free Speech” for $500 from Blackwell’s “Corner Store” series, in which she uses retro pop culture imagery from her childhood with graffiti influences and the incorporation of subtle social-political commentary.

“His support meant the world to me at a time when things seemed really bleak. Guy’s support and endorsement of my work has led to more interest from other arts patrons,” Blackwell said.

“I think what’s really cool about what Guy has done is that he has gotten other collectors to take notice and join in these efforts to support the arts during this challenging time. Hopefully his positivity continues to be contagious.”
Art “saved his life”

When Philoche was 3 years old, his family immigrated to the US from Haiti with nothing to their name.
“Leaving one country to come to another was difficult. I didn’t speak the language, I was awkward and weird and trying to find myself in a new country,” Philoche said. “I learned the language by watching cartoons and reading comics, and found my voice by drawing Disney characters. It’s how it all started.”

Two decades ago, he moved from Connecticut to New York City where he decided to dedicate himself to his art. Philoche started off by sliding business cards under apartment doors and hopping from art gallery to art gallery in hopes of meeting interested collectors.

“Fast forward twenty years, I’m in the game,” he said. “But throughout those years, I had no one open a door for me. It was me going through the back door, the window, until I found a way in the room by myself. Now that I have a seat at the table and I actually have a voice, I vowed to myself to open that door for other artists.”

After struggling for years to make a name for himself, the artist now has a philosophy: “Sell a painting, buy a painting.” For every time he celebrates a successful art show or sells another one of his pieces, Philoche searches for a fellow artist and buys a piece for his own collection.

Every once in a while, Philoche places one of his paintings — worth about $100,000 — on a street corner in New York City for a lucky person to find. He calls this project “Art for the People,” an effort to share his art with everyone, even those who can’t afford it.

“Art saved my life. I owe it a debt I could never repay, but the only way to really repay it is by buying other art from someone who hasn’t gotten a big break yet. And that’s what I’m going to keep doing,” he said.
As the artists continues to spend his days searching for inspiration and making creations of his own, he says he does not plan to stop supporting struggling artists any time soon.

Falling into Debt: What You Should Be Aware Of