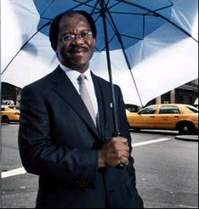 Travel is a constant for Adebayo O. Ogunlesi, a director in the New York City-based investment bank First Boston Inc. On Monday, he may be in Caracas, Wednesday in Manhattan and Thursday off to Sydney. “It is an unusual week when I spend the whole time in New York. I get my passport renewed every nine months,” the Nigerian-born banker says.

Ironically, Ogunlesi thought he would spend his career in law. After the Oxford University alumnus received his Harvard JD and MBA degrees, he spent two years clerking. First, the former Harvard Law Review editor worked in the U.S. Court of Appeals for the District of Columbia, then for former Supreme Court Justice Thurgood Marshall. In 1982, he joined the partner track at the elite New York City law firm of Cravath, Swaine & Moore. “That’s where I thoughtl would be forever,” he says.

The same year, a Cravath, Swaine client– First Boston–asked to borrow Ogunlesi for three months to work on a liquefied natural gas project. Shortly after, First Boston “discovered I had an MBA and actually read spreadsheets,” he says.

This was good for First Boston and bad for Cravath, Swaine, to which Ogunlesi never returned. “In an investment bank if you are good, you get responsibility and respect early on. In a law firm, even if you are good you have to wait,” he says.

There has been no waiting at First Boston. Ogunlesi has been involved in a stream of deals including buying airplanes, selling airlines and providing project finance for petroleum projects. Among major deals: in 1991, leading a team that sold a controlling interest in the Venezuelan airline Viasa to an Iberian Airlines-led group for $145 million; two years earlier he led a group that helped Iberian Airlines buy Aerolinas Argentina for $500 million and in another deal provided $150 million in project financing for Texaco and California Edison. Ogunlesi’s office is festooned with deal trophies, such as, tombstones, model airlines and hats with company logos.

Generally modest, Ogunlesi admits he knows how to assemble teams. But he says the hardest aspects of his work are the nontechnical ones. These include: influencing clients, inspiring confidence, managing expectations and knowing when to step aside. The quantitative side is predictable; the human side is not. “In the 1980s, the number of transactions seemed important. But at the end of the day what you really have to do is maintain a long-term relationship with a client,” he says.

Ogunlesi remains loose by not taking himself too seriously. This point was brought home, he says, the only time his son was impressed by his job. The reason: Ogunlesi led a $62.5 million asset-backed preferred stock offering for Mattell, the toy maker.

Blacks in Wall Street and Beyond BENJAMIN DUSTER