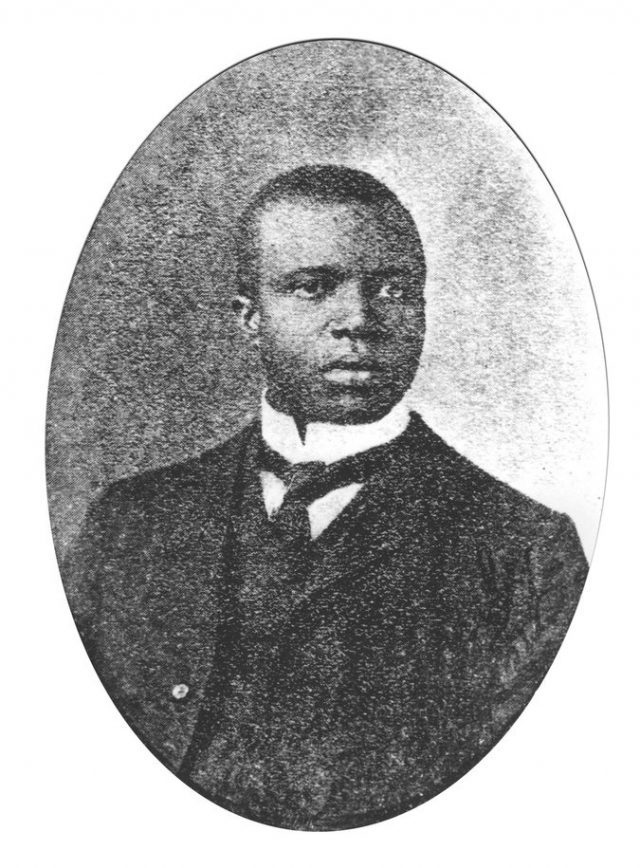 A pianist and ragtime master who wrote “The
Entertainer” and the groundbreaking opera “Treemonisha.”

When Scott Joplin’s father left the North Carolina plantation where he had been born a slave, there was one thing he wanted to hold on to: the echoes of the Negro spirituals he had heard in the fields. In those songs he found a sense of uplift, hope and possibility.

In the post-Civil War era, the cruel breath of slavery and the aborted plan of Reconstruction still hung over the American South. But in the Joplin home, banjo and fiddle music filled the family’s evenings, giving the children — Scott in particular — a sense of music’s power to move.

Even among the colossal outpouring of distinctive American music in the late 19th and early 20th centuries, Scott Joplin’s compositions stand out as classics. He would come to be revered as a ragtime giant, writing such hits as “Gladiolus Rag,” “The Entertainer” and “Maple Leaf Rag.”

His piano compositions were a hit in the saloons of the Midwest — he almost single-handedly put St. Louis on the musical map — but also in the high-society parlors of great European capitals. But fame, witchy and mercurial, didn’t save him from the quagmire of race, money woes and public fecklessness in his lifetime.

Scott Joplin was born in either 1867 or 1868 (accounts differ) in Texarkana, Tex., to Giles, a laborer, and Florence (Givens) Joplin, who cleaned houses for a living. The family moved between threadbare homes in that border region.

Of the six Joplin children, Scott’s ear seemed most alive to music, and his teachers admired his gift. Florence Joplin would sometimes bargain with owners of the houses she cleaned: She would work for free certain days if Scott could practice on their piano or other instruments. When Scott’s father abandoned the family, life for them became desperate. Just a teenager, a baby-faced and well-mannered Scott went out in the world, boarding rumbling trains with a steely determination to find gigs in a segregated landscape.

The world of vaudeville was a rollicking place to be, but for black performers it could also be psychologically wretched. Entertainers like Bert Williams and George Walker performed a blackface act, even including a racial slur in the name of their act. Ragtime was the soundtrack of that milieu.

Unlike classical music, ragtime was a nontraditional type of playing, as if the pianist were doodling with his fingers, a mad rush of key tapping; “ragged playing,” some called it.

As Joplin grew into his itinerant musician lifestyle, his reputation exploded. The improvisational style of ragtime suited him, and he refused to take a back seat to older ragtime pianists as word spread of his prowess. His arrival in a town made news: Joplin is here.

In the summer of 1893, Joplin went to Chicago for the World’s Fair. Organizers didn’t want black people officially involved, but didn’t stop them from playing around the venue itself. Patrons hurried to hear Joplin, who was already imagining ways to expand his talents.

By the mid-1890s, he was writing his own compositions. While in Sedalia, Mo., he caught the attention of John Stark, a local businessman, who purchased rights to Joplin’s “Maple Leaf Rag.” When it was published in 1899, it became a sensation, and all 10,000 copies quickly sold. (Future printings would ensure Joplin decent royalties for the rest of his life.) There would be other compositions: “Magnetic Rag,” “Weeping Willow,” and Joplin’s most famous piece, “The Entertainer.”

His signature style emerged as a combination of jumpy timing and sweet-sounding piano work. In a widely quoted description, Stark himself would say Joplin possessed “the skill of a Beethoven with the sentiment of a Black Mamma’s croon.” It was a way of saying that Joplin mixed a European classic sensibility with black folkloric music — by way of the piano.

Despite his commercial success, Joplin’s love life had been clocked by sadness nearly from the beginning. A child from an early union died. In 1904, he married a woman who reportedly died that very year. Eventually, he found comfort with Lottie Stokes, his last companion, who operated a boardinghouse to bring in added income. Joplin was often troubled by financial woes, as he lacked business savvy to protect the income he received from royalties. Smart marketing also eluded him. “He didn’t have the right personality to push himself,” Edward A. Berlin, who wrote the 1994 book “King of Ragtime: Scott Joplin and his Era,” said in a phone interview. “He was not Bert Williams or Eubie Blake.”

When Joplin arrived in New York City in 1907, he was popular enough to find work right away. There were popular cabarets in town — Barron’s Little Savoy, the Douglass Club, Banks’s Club — and they all lobbied for him to appear. But despite the interest in ragtime, Joplin and his cohort were well aware that their music was still thought of as a low form — “whorehouse music,” some labeled it, and Joplin’s earnings were meager. From the pulpit, ministers bemoaned its bawdy popularity. James Reese Europe, a celebrated black composer, found time to ridicule ragtime, claiming the term itself was “merely a nickname or a fun-name given to Negro rhythm by our Caucasian brother musicians many years ago.”

Race and Ethnicity in London Statistics