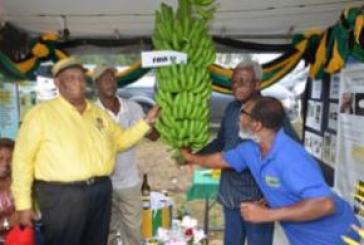 KINGSTON, Jamaica, Thursday April 4, 2013 – The Jamaica government says it intends to significantly reduce the island’s food import bill, which stands at a staggering one billion (US) dollars.
Agriculture and Fisheries Minister Roger Clarke said the intention is to reduce the bill to US$700 in the short to medium term.“We have targeted some 8,000 acres of government lands that we intend to put into the hands of farmers and we are committed to putting in the basic infrastructure to help to get those lands into production.

“We will be working on irrigation systems, we will be helping with extension services and whatever else that can be done …we are going to do it,” he told farmers and other stakeholders at the annual Montpelier Agricultural and Industrial Show in St. James, west of here.
Clarke said that thousands of acres of idle lands are available for production, and the Portia Simpson Miller government is determined to reduce the import bill, while putting money into the pockets of farmers.
“The Ministry of Agriculture is targeting, between the short and medium term, to reduce that importation bill by at least US$300 million and I think we can do it,” he said, citing statistics to show that the importation of foods has been showing a steady decline, as farmers have increased production in many areas.
“In terms of ginger, which we can be proud of, we imported 101,000 pounds in 2011.  Last year 53,000 pounds came in, but we exported one million pounds.
“When it comes to pork, we never had one imported leg of ham in this country last year … every pound of ham that was eaten last year was produced by our Jamaican farmers,” he added.
Clarke said the task at hand is for the country to continue to produce more of what is consumed, adding “we are going to produce as we have never produced before, because that is the only way we are going to survive”.
Clarke said what he saw at the show was evidence that agricultural sector is thriving and paid tribute to farmers whom he said “are the ones who are feeding us now and who will continue to feed us way into the future”.

How to start a Restaurant