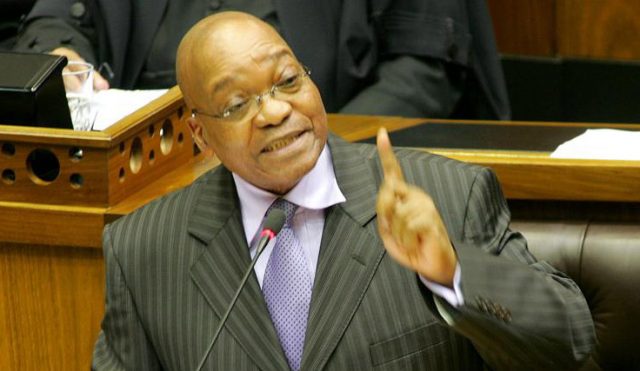 By NORIMITSU ONISHIFEB. 14, 2018
(First published 14 February, 2018)
President Jacob Zuma of South Africa addressing the nation in Pretoria on Wednesday. Credit Phill Magakoe/Agence France-Presse — Getty Images
JOHANNESBURG — President Jacob Zuma of South Africa, a master tactician who survived a string of corruption scandals and harsh court judgments during his nearly nine-year presidency, agreed on Wednesday night to step down, repudiated by the governing African National Congress Party, threatened by a no-confidence vote in Parliament, cornered by opposition parties and abandoned by millions of voters.
In an address to the nation Wednesday night, Mr. Zuma said he was resigning even though he disagreed with the party’s decision ordering him to do so.
“I have therefore come to the decision to resign as president of the Republic with immediate effect, even though I disagree with the decision of the leadership of my organization,” he said at the end of a lengthy address on television. “I have always been a disciplined member of the A.N.C.”
It was a humiliating end for Mr. Zuma, a charismatic anti-apartheid hero who was imprisoned on Robben Island with Nelson Mandela and was once the A.N.C.’s intelligence chief. Cyril Ramaphosa, the deputy president whose election as A.N.C. leader in December set off a power struggle with Mr. Zuma, immediately became acting president.
Initially Mr. Zuma’s presidency inspired hope in millions of South Africans, especially the poorest. But, tainted by numerous accusations of misconduct, he came to symbolize the corruption that flourished during his time in office.
Influence peddling in his administration was so widespread, according to the nation’s former public protector, that it became a form of state capture in which Mr. Zuma’s business partners or friends influenced government decisions in their personal interest.
Now, his departure as president leaves South Africa with a disillusioned electorate, a weakened economy and a tarnished image in the rest of Africa.
Only hours before his resignation he sounded defiant and aggrieved during a live interview with the state broadcaster SABC, after party leaders threatened to hold the no-confidence vote on Thursday. He indicated strongly that he would not resign, saying that the party’s effort to pull him from office was “unfair,” that he was being “victimized,” and that he had done nothing wrong.
But by Wednesday night, whatever narrow paths of escape he may have hoped for earlier had closed.
Mr. Zuma, who throughout his long career had overcome scandals with a combination of guile and boldness, said he did “not fear exiting political office.” He expressed contrition, though only fleetingly, saying that in executing his political responsibilities, he had not been “the epitome of perfection.”
“If truth be told,” he added, “none of us are.”
Mr. Zuma still faces possible corruption charges for an arms deal in the 1990s, before he was president. If he had remained in office, he might also have faced impeachment proceedings stemming from another corruption case, related to the misuse of public funds for upgrades to his homestead.
On Thursday, Mr. Ramaphosa is almost certain to be chosen by Parliament to become the nation’s fifth president since the end of apartheid in 1994; all have been members of the A.N.C.
The resignation was the culmination of a long internal fight, pitting Mr. Zuma’s supporters against an ascendant faction led by Mr. Ramaphosa, who pushed the president to step down before the end of his full term in mid-2019. The balance finally tipped against Mr. Zuma when the majority of party leaders concluded that the A.N.C.’s interests, and their own, would be better served under a new head of state.
On Tuesday, after more than a week of failed efforts by Mr. Ramaphosa to ease Mr. Zuma out office, party leaders ordered him to step down, saying his continued presence as the nation’s leader would “erode the renewed hope and confidence among South Africans,” and indicating that he was hurting the party’s electoral prospects.