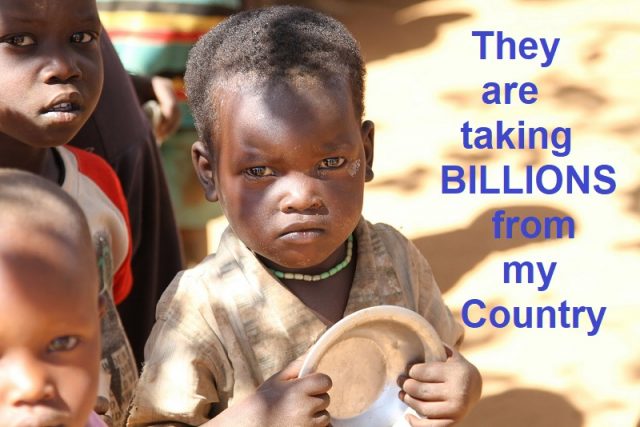 Karen McVeigh
(first published Wed 24 May 2017)
Research by campaigners claims aid and loans to the continent are outweighed by financial flows to tax havens and costs of climate change mitigation
The headquarters of the African Union in Addis Ababa, Ethiopia. Campaigners said illicit financial flows account for $68bn a year.
More wealth leaves Africa every year than enters it – by more than $40bn (£31bn) – according to research that challenges “misleading” perceptions of foreign aid.
Analysis by a coalition of UK and African equality and development campaigners including Global Justice Now, published on Wednesday, claims the rest of the world is profiting more than most African citizens from the continent’s wealth.
It said African countries received $162bn in 2015, mainly in loans, aid and personal remittances. But in the same year, $203bn was taken from the continent, either directly through multinationals repatriating profits and illegally moving money into tax havens, or by costs imposed by the rest of the world through climate change adaptation and mitigation.
This led to an annual financial deficit of $41.3bn from the 47 African countries where many people remain trapped in poverty, according to the report, Honest Accounts 2017.
The campaigners said illicit financial flows, defined as the illegal movement of cash between countries, account for $68bn a year, three times as much as the $19bn Africa receives in aid.
Tim Jones, an economist from the Jubilee Debt Campaign, said: “The key message we want to get across is that more money flows out of Africa than goes in, and if we are to address poverty and income inequality we have to help to get it back.”
The key factors contributing to this inequality include unjust debt payments and multinational companies hiding proceeds through tax avoidance and corruption, he said.
African governments received $32bn in loans in 2015, but paid more than half of that – $18bn – in debt interest, with the level of debt rising rapidly.
The prevailing narrative, where rich country governments say their foreign aid is helping Africa, is “a distraction and misleading”, the campaigners said.
Aisha Dodwell, a campaigner for Global Justice Now, said: “There’s such a powerful narrative in western societies that Africa is poor and that it needs our help. This research shows that what African countries really need is for the rest of the world to stop systematically looting them. While the form of colonial plunder may have changed over time, its basic nature remains unchanged.”

Democratic Republic of the Congo mineral wealth is worth $24 trillion

The report points out that Africa has considerable riches. South Africa’s potential mineral wealth is estimated to be around $2.5tn, while the mineral reserves of the Democratic Republic of the Congo are thought to be worth $24tn.

However, the continent’s natural resources are owned and exploited by foreign, private corporations, the report said.

Bernard Adaba, policy analyst with Isodec (Integrated Social Development Centre) in Ghana said: “Development is a lost cause in Africa while we are haemorrhaging billions every year to extractive industries, western tax havens and illegal logging and fishing. Some serious structural changes need to be made to promote economic policies that enable African countries to best serve the needs of their people, rather than simply being cash cows for western corporations and governments. The bleeding of Africa must stop!”
However, Maya Forstater, a visiting fellow for the Centre for Global Development, a development thinktank, said the report did not provide a meaningful look at the issues.
Forstater said: “There are 1.2 billion people in Africa. This report seems to view these people and their institutions as an inert bucket into which money is poured or stolen away, rather than as part of dynamic and growing economies. The $41bn headline they come up with needs to be put into context that the overall GDP of Africa is some $7.7tn. Economies do not grow by stockpiling inflows and preventing outflows but by enabling people to invest and learn, adapt technologies and access markets.
“Some of the issues that the report raises – such as illegal logging, fishing and the cost of adapting to climate change – are important, but adding together all apparent inflows and outflows is meaningless.”
Forstater also questioned some of the report’s methodology.
The coalition of campaigners, including Jubilee Debt Campaign, Health Poverty Action, and Uganda Debt Network, said those claiming to help Africa “need to rethink their role”, and singled out the British government as bearing special responsibility because of its position as the head of a network of overseas tax havens.

Dr Jason Hickel, an economic anthropologist at the London School of Economics, commenting on the report, agreed that the prevailing view of foreign aid was skewed. Hickel said: “One of the many problems with the aid narrative is it leads the public to believe that rich countries are helping developing countries, but that narrative skews the often extractive relationship that exists between rich and poor countries.”

A key issue, he said, was illicit financial flows, via multinational corporations, to overseas tax havens. “Britain has a direct responsibility to fix the problem if they want to claim to care about international poverty at all,” he said.
The report makes a series of recommendations, including preventing companies with subsidiaries based in tax havens from operations in African countries, transforming aid into a process that genuinely benefits the continent, and reconfiguring aid from a system of voluntary donations to one of repatriation for damage caused.
Source Guardian.com