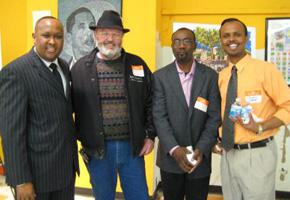 MINNEAPOLIS — Hussein Samatar, one of Minnesota’s most improbable bankers, hung a new shingle in Minneapolis towards the end of last year.
Samatar, a Somali refugee who 15 years ago was struggling to learn English at the nearby Franklin Library, is moving his African Development Center(ADC) staff of eight into the refurbished former North Country Co-op building in the Cedar-Riverside neighborhood, an immigrant crossroads since working-poor Scandinavians flocked to the area generations ago.

“There’s no magic to it,” said Samatar, a University of St. Thomas-educated MBA and Wells Fargo-trained banker who started ADC in 2004. “We train, we provide technical assistance and we make loans. We are social entrepreneurs, not a social service agency.”
Community development corporations (CDCs) were created 30 years ago to provide often-subsidized credit to fledgling businesses in inner-city neighborhoods and small towns that are otherwise unbankable. The borrowers typically lack established credit or need less than a bank usually loans.
Participating banks also get credit for their investments in CDCs toward meeting requirements of the federal Community Reinvestment Act, designed to ensure that they are providing credit and economic-development investments throughout their service territories, including working-poor neighborhoods.
Counselors at ADC teach personal finance, help prepare clients for home ownership and coach budding entrepreneurs.
The nonprofit community development corporation has made more than 100 commercial loans that average less than $20,000 each. That, counting related credit from lending partners, has leveraged more than $10 million in small-business financing to help dozens of self-sustaining grocers, clothiers and technology vendors, among others, who have played a vital role in the core-city commercial resurgence.
“Every dollar that comes through us is leveraged three times or more by our partner lenders and the equity of the business entrepreneurs,” Hussein said. “They must have skin in the game. Most of them have worked two or three jobs, go to school and care for their families to be successful in America.”
Samatar, 41, trained in finance and economics, was part of the last graduating class of Somali National University in 1991. He spent months in refugee camps and arrived in Minnesota in 1993, at the recommendation of a camp director for whom Samatar had volunteered.
“Hussein has great discipline and a hunger to learn that he inherited from his late mother,” said Peter Heegard, the retired Wells Fargo executive who has mentored Samatar since the early years. “He knows what it is like to see an economy destroyed and to lose everything. And he had the desire, aptitude and education to become a banker and a community developer and help build an economy. He’s an entrepreneur who could have stayed at Wells Fargo, made $150,000 a year and done very well. He doesn’t look back.”
Samatar is proud of the creditworthiness of his customers.
“You might think that Minnesota African-American immigrants, nearly a third of whom live in poverty, would be high-risk,” he said. “Our loan delinquency rate is about 7 percent. The (national CDC) average is about 15 percent. Our clients take great pride in building their businesses and communities.”
At Cedar Avenue and Lake Street — a dormant, dangerous corner a decade ago — Mohammed Ahmed, the owner of Midwest Halal Supermarket, expanded his City Market in 2007 with $70,000 in ADC-arranged financing on top of a six-figure investment of his own. Ahmed, who heads a family of eight, worked as a dishwasher and school bus driver, in addition to opening his first small store about a decade ago.
In July, Abdiqafar Adan paid off a $42,000 loan to ADC as business prospered at his Afrik grocery and wholesale operation in the Cedar-Riverside area, which he started with several partners in 2000. Adan, now the sole owner, employs 10 people and is a Minneapolis homeowner.
Shukri Gedi, a clothing store owner at the Karmel Mall in south Minneapolis since 2000, has increased sales since getting a key loan through ADC in 2007, under an alternative-financing program that conforms to Islamic law, which prohibits paying interest. The repayment model is based on remittance of some profit.
These are not cookie-cutter, chain-store deals in suburban shopping malls.
“We have to really know our customers and keep an open mind,” Samatar said. “We do about 35 loans a year and we have loaned up to $50,000, although our average is $18,000.”
ADC also is a partner with Mihailo Temali’s Neighborhood Development Center in the Midtown Global Market, the eclectic, three-year-old bazaar of several dozen food, apparel and other entrepreneurs housed in the once-abandoned Sears building that’s drawn national acclaim and growing patronage.
Temali, a veteran of banking and community development, mentored then-banker Samatar and urged him to start ADC to assist the growing African community that had budding entrepreneurs but lacked know-how and capital.
ADC is supported by $3 million in capital, including investments from the McKnight, Minneapolis andOtto Bremer foundations, U.S. Bancorp, Wells Fargo and Western Bank, and the Minneapolis Department of Community Planning and Economic Development. ADC also partners with community business and housing developers and grass-roots organizations in the Twin Cities, St. Cloud,Mankato and Marshall, Minn.
For the past two years, ADC was named the most active small-business lender through Minneapolis-sponsored initiatives.
“We believe we can combine ‘bottom lines’ by serving the community well, building wealth for the people we serve in Minnesota and being mindful of our finances,” Samatar said.
ADC spent $1.6 million to acquire and refurbish the old North Country building, including space it already has subleased. It’s moving from second-floor rental space a couple of blocks away to a prominent site that highlights its green-and-orange colors in a building that has evolved from an ice cream factory in the days of Scandinavian immigrants. The center also plans to raise an additional $6 million in capital.
Samatar, who earned $78,000, according to ADC’s 2008 nonprofit filing with the state, lives with his family in a modest Phillips neighborhood house.
“Home is where the heart is, and Minnesota is our home,” Samatar said. “I cannot believe our good fortune.”

Thinking Of Buying An Online Business? Here Are A Few Tips