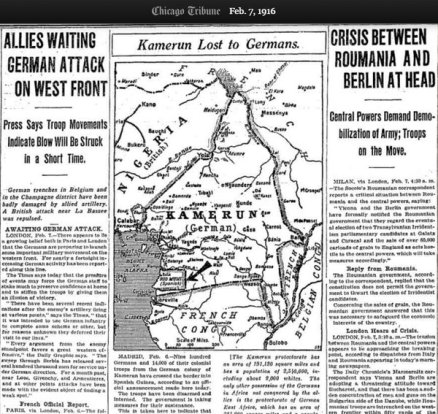 Introduction
The First World War, which lasted from 1914 to 1918, was mainly a struggle for supremacy among the European powers. Africans participated in this war both as combatants and non-combatants in support of colonial powers. The First World War also extended to Africa. German forces were pushed out of Kamerun, Togo, German South-West Africa and German East Africa. This war had many effects on Africa.
Economic Effects
As a result of the war, trade between Africa and Europe was disrupted. This was because many countries in Africa traded with Germany, especially in the previous 2-3 decades. As a result of the war, the cost of goods and services was higher than the income of the people. The cost of living was so high and not affordable.
The war also had a negative effect on trade. There was an economic depression at the end of the war. Prices of commodities fell, poverty increased. Trade with many counties stopped, especially with Germany, the leading trade partner. For example 80% for Liberia’s trade involved Germany and collapse of trade seriously affected Liberia’s economy, producers also suffered because of unfavorable prices on the market. There was also unemployment. Unemployment also seriously affected thousands of demobilized world war one veterans who returned home. Transport and work on ports disappeared and this created unemployment.
The economic depression after world war one also led to urbanization and migration. Many people moved to port cities in research of jobs. Once outside their home areas they suffered because of lack of social support. They suffered unemployment and illness. Those people who changed from subsistence to urban work could not support those they left in rural areas and this created more suffering.
The hard economic conditions created disturbances. For example there were workers’ tricks in Dahomey (Benin) in the port of Cotonau and Mombasa port in Kenya. The strikes pointed to the unfairness of colonial policies and contributed to the beginning of the independence struggle.
The war also led to changes in colonial economic policies. Colonial powers left the war very poor. They therefore encouraged their colonies to be economically independent or self sufficient. In trying to get money to support the war, colonial powers raised taxes which Africans were supposed to pay. However, Africans were mainly involved in subsistence production and very poor. They found it difficult to raise money for taxes.
Colonial powers learnt lessons from the war which further affected changes in their policies. Colonial powers adopted ideas introduced during the war such as self determination, liberty, and democracy among others. As a result, racism and exploitation in their colonies were reduced. New strategies to develop their colonies were put forward. In British colonies they pursued the dual mandate of Lord Lugard. Lugard had suggested that Africa should be developed to benefit Africans by improving living standards and the rest of the world through trade. In French colonies they introduced La mise en valeur-increasing the value of colonies through increased development.. The idea of colonial powers obligation to develop Africa developed. However although they felt concerned about the situation of Africans this did not include promotion of equality or liberation of Africans.
Political Effects
According to propaganda of the allied powers, the First World War was fought for democracy. It was against militarism and dictatorship. As a result, there was much discussion about human rights, especially civil and political rights. Many Africans who had acquired western education began to demand for greater participation in governance and decision making. Educated Africans started news papers critical of colonial policies. The criticism was only tolerated in British colonies because of the British traditional of free speech. However, the demands of educated Africans could not be accepted because they were a minority. Secondary, influence of racism was still very strong.
Many Africans were disappointed as a result of the war. Africans saw the Versailles settlement of 1919 as an opportunity to present their complaints. However, Africans were not allowed to attend. In addition, Germany’s colonies were divided without consulting anyone. No attention was paid to geographical spread of ethnic groups. The disappointment led to the rise of nationalism and the rise of Pan-African Congresses.
Social Effects
The First World War caused loss of lives for Africans. The thousands of Africans lost life during World War I both as combatants and labourers. More than two millions Africans died during the war. Some died as a result of the war and others in combat while fighting on the side of their colonial masters. In eastern Africa 100,000 died while from French North and West Africa 65,000 died. The influenza epidemic affected large areas of Africa where about 2% of the African population died as a result of disease. There was easy spread of disease because of movements during the war and the forced migrations encouraged by colonial powers after the war.
During the war, Africans were exposed to racism, especially on the British side where they were restricted from combat and only concentrated on labour such as cooking and carrying goods. Because of racist policies and unfair treatment during the war, many Africans and blacks in the Caribbean decided to return to Africa.
Source: MyElemu

Why You Should Read “What to the Slave Is the Fourth of July?” by...