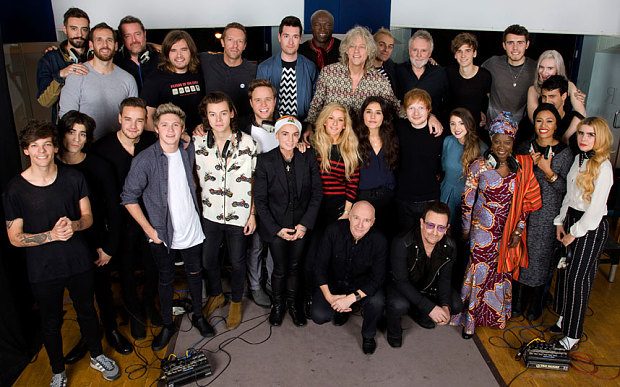 The Black Music Industry produced this open letter on November 15 2014
RE:IMI (Race Equality: In Music Industry) notes that Bob Geldof is recording a new ‘Do They Know It’s Christmas?’ single by Band Aid 30 this weekend, with profits going towards the ebola response in west Africa. Whilst we appreciate this initiative and the many less high profile efforts by African community organisations in Britain, it is a shame that 30 years on, Geldof, a man who seems to have a passion for Africa, has not widened his address book to include African artists.

To the best of our knowledge the only African included in the Band Aid 30 lineup is Emeli Sande. Is it that Geldof is not aware of the numerous African British artists with commercial success such as Tinie Tempah, Leona Lewis, Dizzee Rascal, Beverley Knight, Corrine Bailey Rae, Omar, Sade Adu, Alexandra Burke, to name a few who could have been included?

Whilst this is not a personal attack on Geldof, the reality is that for all the good intentions of the Band Aid 30 project to help Africans, what many within the African British and black music communities see from the published lineup is another form of Eurocentrism – the European off to help the African, without engagement with African musicians in Britain, let alone on the African continent.

If the music industry is serious about engaging with diversity, particularly race equality, which is the reason RE:IMI has been formed, then that message needs to feed through more, and be reflected in a British collective of artists such as Band Aid 30. As it is, whilst Emeli Sande’s place in the Band Aid 30 lineup is well-deserved, as she is one of Britain’s top selling recoding artists, her inclusion as the only African could be perceived as a tokenistic effort.

We hope that this open letter comes to the attention of the organisers of the recording session in order to redress the situation for future efforts. It would be helpful if today’s multi-cultural Britain was better represented in the Band Aid 30 lineup. 29 years on, perhaps lessons can still be learnt from Michael Jackson, Lionel Richie, and Quincy Jones, whose ‘We Are The World’ effort was performed by a truly multi-cultural collection of artists known as USA For Africa.

Outside of Band Aid 30 and the big charities and NGOs, there are initiatives led by Africans both here in Britain and on the African continent. In London, the newly formed collective Elbow Out Ebola has a conference at Zanzibar in south London on December 5 to find out where ebola-hit countries are at, and how Diasporan Africans can help, and community groups BTWSC and African Histories Revisited are organising a dinner fundraiser on December 6 at Best Western Cumberland Hotel in Harrow in aid of Médecins Sans Frontières UK’s ebola response.

Interestingly, a number of African artists on the continent have recorded songs to raise awareness about the ebola virus, but as the organisers or artists do not have the same profile or media access as Geldof, you’ve probably not of heard of them. One of the songs is ‘Africa Stop Ebola’, which features singers well-known on the so-called world music scene, such as Tiken Jah Fakoly, Amadou & Mariam, Salif Keita, Oumou Sangare, Kandia Kora, Mory Kante, and rapper Didier Awadi.

The song is a message about what people can do to help stop the spread of ebola in Africa, and is performed in French and local languages widely spoken across west Africa to ensure that the message is understood.

RE:IMI encourages Geldof, if he would like to help Africans, to engage with them and work with them rather than merely doing things for their benefit. We thank all the Band Aid 30 artists, but we are now wise to the rise in sales and profile which charity records, and concerts, provide.