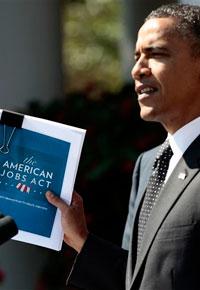 For a lot of small businesses, there didn’t seem to be much President Obama could have said to sway them that Washington was able to help foster new jobs, but some liked his proposed $447 billion package of tax cuts and infrastructure spending — with reservations.
Primarily, they doubted that he stood a realistic chance of getting the program through Republican opposition in Congress. They also worried about what the stimulus he unveiled Thursday would mean for the nation’s deficit.

“I love it from my standpoint, but looking at it from the government’s standpoint, can they afford to do that?” said Kim Megonigal, chairman of Kimco Staffing Services in Irvine, Calif., which operates 40 offices in California.
Under Obama’s plan, Megonigal stands to save $155,000 from the 50 percent payroll tax cuts of his existing employees. Additionally he would save as much as about $6,600 in payroll taxes for every new employee he adds as long as that represents overall growth in payroll up to $50 million from the prior year.
Obama’s package prompted comparisons to the $787 billion American Recovery and Reinvestment Act passed in early 2009. That stimulus package, analysts said, helped pull the economy out of recession, but was seen as too complicated and producing too little bang for buck — a perception fostered in part by the administration’s inaccurate forecasts about how high unemployment would go.
Obama’s new plan was designed to be much simpler.
“I think they’ve learned from the Recovery Act and tried to make it easier to implement it and to be more effective,” said Mark Zandi, chief economist at Moody’s Analytics, a research and forecasting firm.
Zandi estimates that Obama’s new ideas, if adopted in their entirety, would add 2 million additional net jobs in 2012 and bring the unemployment rate to about 8 percent by election time next year, down from 9 percent if there was no policy change.
“It’s a bold effort to provide more support to the economy, certainly bigger than widely anticipated,” he said.
The plan offers about $245 billion in tax relief for individuals and businesses, going well beyond the payroll tax holiday Congress enacted last year. Obama would expand that cut for workers, providing a $1,500 tax savings to the typical American family that saw a cut of $1,000 in the first round.
The proposal would also slash the payroll tax in half for businesses with payrolls of up to $5 million, and declare a complete payroll tax “holiday” for employers who hire new workers or give wage increases to current employees. All companies would be eligible, but the break would be limited to the first $50 million in new payroll spending.
But the package is conspicuously absent of any measures to provide direct relief to distressed homeowners and the depressed housing market, a problem many experts believe is central to the sluggish recovery.
The president’s plan also holds another potentially big risk down the road: The economic benefits in the short term will turn into drags in 2013 and the following year as the stimulus fades. And if the private-sector economy hasn’t gathered enough steam by then, the government could be looking at the possibility of another recession or left with the tough choice of having to renew or increase fiscal spending.
Business trade groups were far less enthusiastic about Obama’s plan.
Marty Regalia, chief economist for the U.S. Chamber of Commerce, said the proposed payroll tax cut fell short of broader tax reform needed.
“If you are trying to stimulate the economy and create jobs, there are better ways to do it, starting with a complete restructuring of the tax code for individuals and businesses,” he said.
William Dunkelberg, chief economist for the National Federation of Independent Business, a small-employer lobbying group, doubts it will push many more small companies to add workers.
Small firms usually have led the hiring coming out of recessions, but this time they’ve been on the sidelines. Dunkelberg said that was mainly because they were not generating enough sales and don’t have confidence in the future.
Obama also didn’t change Kurt Lustig’s mind.
“As a manufacturer, we create jobs when we are able to create or fill demand for our guitars,” said the co-founder of Taylor Guitars in El Cajon. “If demand is not there, we’re not going to be hiring.”
And what would create demand, he said, would be a “higher confidence on the part of the electorate and a willingness to spend money” — things now lacking, he said, largely because of bad government policies.
At Kimco Staffing, Megonigal hired workers in the first half of this year, but like many other companies, that stopped in early summer as the economy and outlook turned increasingly worse. Still, he liked what he heard from the president.
“It’s a wonderful way to incentivize business (to hire) because you can invest at a lower cost,” Megonigal said. “That’s amazing. I wasn’t expecting anything like this. It just seems too rich. I don’t get how you do it. I mean you have to balance the budget.”
Russell Goldsmith, chief executive of City National Bank in Los Angeles, didn’t hear anything in Obama’s plan that he figures would help his bank specifically. Nonetheless, he praised the tone and the substance of Obama’s speech.
“I’m particularly enthused about the president’s focus on infrastructure and rebuilding America,” he said. Obama’s plan calls for spending tens of billions to modernize schools and improve transportation, among other projects.
“I was very pleased to see the president very energetically focus on the growth of jobs and the economy,” he added. “I see it as a shot in the arm to jump-start the U.S. economy.”