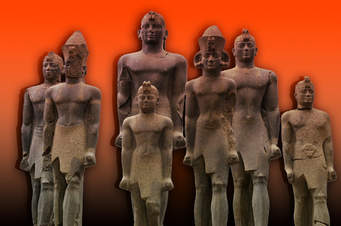 There is a major point of contention over whether the Ancient Egyptians were Black Africans. It is quite understandable that this issue would stir up heated passions. For nearly two hundred years now, White scholars have removed Black people from Egypt, Egypt from Africa and Africa from world history. They have always taught that Egypt is in the Near East, the Middle East, the Mediterranean and even the Fertile Crescent. They have never informed the world that Egypt is and always has been on the Continent of Africa.

While White publishers controlled everything written and taught about Africa – – and often published books stating that the Ancient Egyptians were White – – no one, except Black people, complained. However, since Black people began publishing their own work and using the internet to tell our story, suddenly everyone is interested in setting Black people straight by insisting that the Ancient Egyptians were neither Black nor white, but Arabs, like the Arabs of today.

We disagree. Arabs invaded Egypt in the 7th Century AD, long after Ancient Egyptian civilization had declined and faded away. Arabs have no more connection to Ancient Egypt than Europeans have to Ancient America.

Many have argued that, even if the Ancient Egyptians were Black Africans, modern African Americans, who lay claim to Egyptian civilization, are not akin to them because their ancestors were West Africans. This reflects a lack of knowledge about African history. Virtually all West African people trace their ancestry to the northeast and ultimately to the Nile Valley. A number of Black scholars have revealed evidence of the ancient migratory trail from the Nile across the continent to West Africa and the Atlantic Ocean. Therefore, modern African Americans do indeed have a direct link to the Ancient Egyptian people.
We understand that most White people and Arabs have great difficulty imagining Black Africans to have laid the foundation of civilization. We sincerely regret that Western racist propaganda has so narrowed their worldview. But, at this site we deal with evidence – – not propaganda, not passion, not preconceived notions or white supremacy.

In our bi-monthly MA’AT newsletter, we present evidence that the main-stream media will not touch, because it would destroy racist myths that have been embraced as inviolable truths by millions around the world. If you find this site to be at variance with your sacred belief system, please avoid visiting us. After all contrary opinions prevail in most other forums. Why not express your views on those sites where you may comfortably reassure people of like mind?
In the meantime, for those of you who chose to study, evaluate and critique the Africentric perspective on the origin of the Ancient Egyptians, we invite you to visit the February, 1997 issue of MA’AT. This monumental document presents a substantial body of evidence that conventional scholars, both Arab and European, choose to ignore.

Many Black scholars have presented the Africentric view on the “race” of the Ancient Egyptians. Their research has triggered a reevaluation of certain assumptions. For example, most Black Africans do not have thick lips and broad noses. There are four distinct Black African physical types. All were part of the Ancient Egyptian population. Secondly Ancient Egyptian drawings were largely conventional. This means that they clearly had a symbolic meaning that was not true to form. For example, the traditional reddish brown color used to portray all men (no matter what their true skin tone) may have represented the African “blood of life” concept. For religious purposes, Black Africans have painted their bodies red or reddish brown from time immemorial.
Therefore, one should not reach hard and fast conclusions about Egyptian ethnicity based on the color used in the tomb and pyramid drawings. Furthermore, even if the colors are accurate depictions of the people, a number of indigenous, unmixed Africans, like the Pygmies, have reddish brown skin tone. Yet no one would deny that these are “Black” African people. In light of this, if the Ancient Egyptians were indeed of reddish brown skin color, they were of the same color as modern Pygmies.
As many writers in the guestbook have attempted to explain, the original Black Egyptians were mixed with invading Libyans, Persians, Greeks, Romans, Turks, Arabs and Western Europeans. This explains the genetic status of the modern Egyptian, who does not resemble his Black African forebears.

To truly determine the Ancient Egyptian “race,” one must consider the full range of linguistic cultural, anatomical, archaeological and genetic evidence. One recent, nonblack scholar, Richard Poe (“Black Spark: White Fire: Did African Explorers Civilize Ancient Europe”) (Prima Publishing, Rocklin, CA), has done just that and has reached the following conclusion: “Were the Egyptians black? That is entirely up to up to you. But were they biologically African? It would seem that they were.”
We, of course, believe that the Ancient Egyptians were Black Africans and the following is a synopsis of some of the evidence that supports our view:

1. Evidence from Physical Anthropology
The skeletons and skulls of the Ancient Egyptians clearly reflect that they were a Negroid people with features very similar to those of modern Black Nubians and other people of the Upper Nile and of East Africa.

2. Melanin Dosage Test
Egyptologist Cheikh Anta Diop invented a method for determining the level of melanin in the skin of human beings. When conducted on Egyptian mummies in the Museum of Man in Paris, this test indicated that these remains were of Black people.

3. Osteological Evidence
“Lepsius canon,” which distinguishes the bodily proportions of various racial groups categories the “ideal Egyptian” as “short-armed and of Negroid or Negrito physical type.”

4. Evidence From Blood Types
Diop notes that even after hundreds of years of inter-mixture with foreign invaders, the blood type of modern Egyptians is the “same group B as the populations of western Africa on the Atlantic seaboard and not the A2 Group characteristic of the white race prior to any crossbreeding.”

5. The Egyptians as They Saw Themselves
“The Egyptians had only one term to designate themselves =kmt= the negroes (literally). This is the strongest term existing in the Pharaonic tongue to indicate blackness; it is accordingly written with a hieroglyph representing a length of wood charred at the end and not crocodile scales,” singular. ‘Kmt’ from the adjective =kmt= black; it therefore means strictly negroes or at the very least black men. The term is a collective noun which thus described the whole people of pharaonic Egypt as a black people.”

6. Divine Epithets
Diop demonstrates that “black or negro” is the divine epithet invariably used for the chief beneficent Gods of Egypt, while the evil spirits were depicted as red.

7. Evidence From the Bible
The Bible states that “…[t]he sons of Ham [were] Cush and Mizraim [i.e. Egypt], and Phut, and Canaan. And the sons of Cush; Seba, and Havilah, and Sabtah, and Raamah and Sabtechah.” According to Biblical tradition, Ham, of course, was the father of the Black race. “Generally speaking all semitic tradition (Jewish and Arab) class ancient Egypt with the countries of the black.”

9. Linguistic Unity With Southern and Western Africa
In a detailed study of languages, Diop clearly demonstrates that Ancient Egyptian, modern Coptic of Egypt and Walaf of West Africa are related, with the latter two having their origin in the former.

10. Testimony of Classical Greek and Roman Authors
Virtually all of the early Latin eyewitnesses described the Ancient Egyptians as Black skinned with wooly hair.