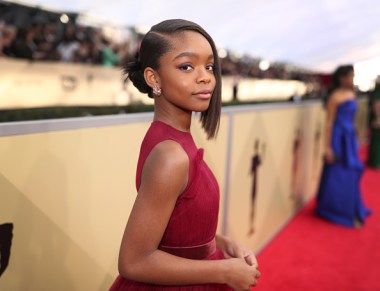 13-YEAR OLD ‘BLACK-ISH’ STAR IN THE MIDST OF EXECUTIVE PRODUCING HER FIRST FILM
Marsai Martin, 13-year old actor, singer, dancer and writer now add producer to her list of accomplishments. Currently bringing the laughs as ‘Diane Johnson’ on ABC’s hit-show ‘Black-Ish’, she’s the older yet sinister twin sibling. Martin’s character is not only brilliant but sarcastic, snarky and lacks a filter for her mouth which often leads her into trouble.
Her acting career began at the age of 5 when she was immediately signed to the Kim Dawson Agency in Dallas, Texas. After appearing in several commercials, she moved to Los Angeles in 2013 and 100 days later secured a campaign with Meineke.
Martin holds her own next to an all-star cast of actors such as Anthony Anderson, Tracey Ellis-Ross, Lawrence Fishburne and Jennifer Lewis. Her skills have earned her two National Association for the Advancement of Colored People (NAACP) Image Awards for Outstanding Supporting Actress in a Comedy Series and Outstanding Performance by a Youth. While on break from ‘Black-Ish’, Martin performed in the 35th-anniversary celebration of the musical ‘ ‘Dreamgirls’ with Sheryl Lee Ralph, Loretta Devine and Jennifer Holiday. She also worked with Meagan Good in ‘How to Die Happy’, ‘Fun Mom’ and Amazon’s ‘An American Girl Story.’
Actor Marsai Martin attended the 24th Annual Screen Actors Guild Awards at The Shrine Auditorium on January 21, 2018 in Los Angeles, California.
Next up, Martin is slated to executive produce and star in the upcoming film ‘Little’. She came up with the idea for the film which tells the story of an adult woman who gets the chance to relive her childhood after the pressures of adulthood become too much for her to handle. Martin will executive produce the film alongside Regina Hall and Josh Martin and ‘Girls Trip’ producers Will Packer and James Lopez along with ‘Black-Ish’ creator Kenya Barris have also signed up to be a part of the project. When the news was released, Tracey Ellis-Ross shared her excitement for her co-star tweeting “Yaaaaasssss @marsaimartin!!!”.
Source: blackdoctor.org

When It Comes To Illegal Drug Use, White America Does The Crime, Black America...