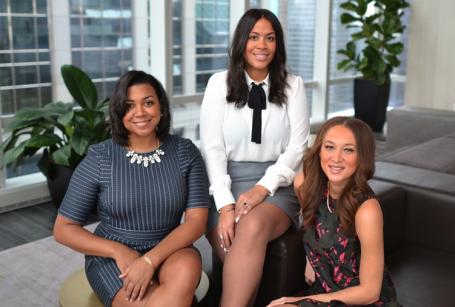 Every Twitter Success Story has the management and owners of twitter grinning from ear to ear, not to mention what it does for the share price.  Be careful what you say on Twitter as it could make you or break you. Tweets have been known to cause people to lose jobs. Careers have been ruined by 140 characters. Say the wrong thing – and it is seen by thousands, maybe even millions as it is retweeted and discussed for days. Say the right things – and you could attract the kind of positive attention you never dreamed of. If you have ever underestimated the power of Twitter, then this story provides evidence of partnerships, businesses and projects which have come about from a simple tweet.  Three Black Female Lawyers Started Law Firm After a Twitter Chat.
Introducing the KMR Law Group.
(First Published 16/05/2016)
Keli Knight, Yondi Morris, and Jessica Reddick are the founders of KMR Law Group

THREE BLACK lawyers from America have proved just how powerful social media can be.
KMR Law Group is a successful black and women-owned law firm in Chicago, and it started with a tweet.
About four years ago, Yondi Morris was a contract attorney, going into law firms to help with whatever they needed for some period of time.
“I had been doing some work that I definitely didn’t love,” Morris, a founding partner of KMR, told Elle magazine. “Technically, I was a contract attorney, which means I went into law firms to help them with whatever they needed for some period of time.”
Newly installed at a law firm that she is too polite to shame, she was on the clock when a partner went over to check in on her progress, insulting her in the process.
“He just looked at me and said, ‘Okay, slave, get back to work.'” She was the only person of colour in the room. “I looked around and just waited for someone to catch my eye,” she remembers. No one met her gaze. Worse still, no one looked surprised.
“For me, honestly, I wasn’t just insulted as an African-American woman. I didn’t want to be viewed as a worker bee anymore.”
She went home and logged on and tweeted, “I need to start my own firm.”
Keli Knight wasted no time. She replied right away, writing, “Let’s meet to discuss.” They did, and invited Jessica Reddick, an old friend that Morris had known for a decade, to join.
“We got together one day in Starbucks and that was the first meeting,” Morris says. “We just all clicked—our personalities, our dreams, our ambitions. In that moment, it all made sense.”
Adrenaline and caffeine flowing, they sketched out a provisional logo on scrap paper and drafted an informal business plan to start a law firm in Chicago. “We decided we were going to do it,” Morris said, “and haven’t looked back since.”
Now, with nearly four years under their belt as the leaders of their own firm, Knight, Morris and Reddick have expanded their practice to include commercial and residential real estate transactions, corporate law, entertainment law and mediation.
First published 16/05/2016
Source: www.voice-online.co.uk

Entrepreneurship and diversity in the UK