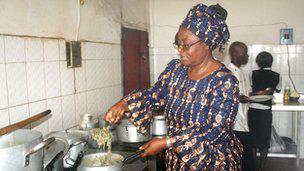 Sylvia Banda is one of Zambia’s most enthusiastic champions of local food and has been using her business, Sylva Professional Catering, to promote her cause.

By purchasing her ingredients from regional, small-scale farmers, she showcases the country’s bounty to the upscale clientele who employ her catering services.

Based out of the University of Zambia’s Great East Road campus in Lusaka, the capital, Mrs Banda is promoting healthy eating, and all the while training a new generation of food service professionals who she teaches the merits of quality, ethical behaviour, professionalism, innovation, service orientation, and personal drive.
She started her business from scratch 27 years ago. At the time, she was employed by the government as a teacher.

I opened the windows and I opened the door, and I could see the smoke fighting, going out, the steam… a few minutes later, people started coming”

She asked for 10 days’ leave without telling her boss what she was going to do.

“I did not want to tell my husband, Hector, that I was going to start a business because I did not want him to discourage me,” she told the BBC’s series African Dream.
“When we talked about it a bit before, he was suggesting that I look for someone to employ, and then me, I can just be going there to supervise and see how that person is working, and I didn’t want that,” she explained.
So, after her husband left for work next morning, she packed some food that she had at home, took her cooking utensils and cutlery, and called a taxi to go to the place where she had decided to open her first restaurant.
“After sweeping and cleaning the place, I switched on the two-plate cooker and I got my new pan, I put the cooking oil, then I chopped the garlic, the onions, the green beans… then I started frying them, bit by bit.”
Instead of going around the neighbourhood to advertise her new business, she left that to the food’s aroma.
“I opened the windows and I opened the door, and I could see the smoke fighting, going out, the steam… a few minutes later, people started coming.”
‘A standing buffet’
Since she did not have any money to buy tables and chairs, she told all the people who went for lunch that first day that they would be offered “a standing buffet”, something that – she assured them – was trendy in the catering business.

“I sold all the food that I cooked that particular day… when I counted the money, I found that I made more than what the government was paying me for a month,” she told BBC Africa’s Mutuna Chanda.

According to Mrs Banda, this was enough motivation for her to stop being a civil servant and go into business for good.
“After exhausting my 10 days, I went back to my working place and requested for two years unpaid leave because I knew that within two years I’d be able to make a decision.”
Two years later her business was doing well and she formally resigned her previous job.
These days the Sylva Group of Companies employs 35 staff full time and more than 100 part time, and has an annual turnover of more than $1m (£660,000).
The group also includes side businesses which process and package traditional Zambian foodstuffs.
These products – including honey, millet, dried seeds, herbs, and local varieties of vegetables – are sold in markets throughout the region and exported to other African countries.
Harvesting ideas
The seasoned entrepreneur also encourages farmers to join marketing associations, and – through her Sylva Professional Catering Training College which opened in 2001 – offers training on alternative harvesting methods as well as on the medicinal properties of indigenous plants and foods.
Through her workshops she preaches techniques for environmental management and promotes the idea that hunger can be reduced by growing local food.

“We train students from certificate to diploma level. Those are professional courses and we have now gone into the construction of a university so that these students can now attain the degree certification,” Mrs Banda said.

Most recently, she has designed the Sylva Solar Food Dryer to sell to small-scale farmers who can use it to add value to their produce.
“We train the farmers to dry vegetables, fruits and legumes using the solar driers which we invented so that they feed into the export market. So far we have trained these farmers, more than 10,000 of them,” the entrepreneur said.
Having started, as she puts it, “with no budget, just the skill… and the desire”, what advice does she have for people who want to open their own businesses?
“You need to know what you want to do, first of all, in life. Secondly, you have to be determined. Of course, it’s not easy to run a business but you have to be determined and focused.
“And, also, try to learn things and then expand upon them… Those innovations are the ones that can help you to grow your business. Of course, competition is there but don’t worry about it, just perfect your business”, she said.