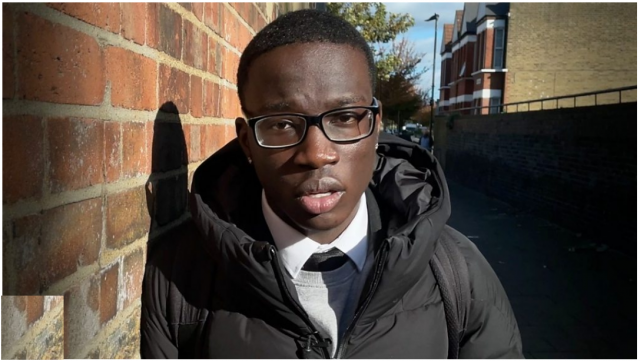 A teenager from north London has beaten over 6,000 young writers to win one of the biggest poetry competitions in the world.

Giovanni Rose, 17, wrote the poem Welcome to Tottenham based on his experiences of growing up in the area.

He said: “It was an amazing feeling. It’s important to use your voice; you’ll never know what changes you can make until you try.”

The Foyle Young Poets of the Year Award is for children aged 11-17 writing original works in English. The Poetry Society said Giovanni was one of 15 winners of the top award.

A boy from Tottenham has won a poetry award for the second time and says it is his experiences growing up in Tottenham which inspire him to write.

The 17-year-old Giovanni Rose, from Tottenham, beat over 6,000 young poets from all over the world to win the Foyle Young Poets of the Year Award 2021 with his poem called Welcome to Tottenham (see below).

Giovanni said: “It was an amazing feeling. I’m glad that the experiences I felt as a young lad from Tottenham will reach a lot of different young people who might have went through the same thing as me.

“It’s important to use your voice, you’ll never know what changes you can make until you try.”
Giovanni explained that for him, poetry has always been a way to express himself and says a lot of things are hard to articulate to another person when speaking – “it’s easier to express in poetry, it’s like talking to myself”.

He added: “I feel inspired when I’m listening to music – I like rap music and poetry is the purest form of rap.”

In its 23rd year, The Poetry Society announced the winners and judges Clare Pollard and Yomi Sode said: “Judging this year’s Foyle Young Poets of the Year was an absolute honour.

“After a period in which the burdens of the pandemic have often fallen so heavily on young people, we were moved by the beauty, fire and resilience of these poems.”

Since 1998, the Award has been finding and supporting young poets from around the world. The competition is for young poets aged between 11 and 17 years old.

From the 14,408 poems entered, this year’s judges Clare and Yomi selected 100 winners, made up of 15 top poets and 85 commended poets.

Winners of the award receive a range of prizes to help develop their writing while the top 15 poets are invited to attend a residential writing course at the Arvon centre, The Hurst in Shropshire, in February 2022. There they will spend a week with Clare and Yomi focusing on improving their poetry

Welcome to Tottenham.
Where we wake up to the smell of ‘Chick king’,
Mixed with the odour of the corpse from the night before.
Where we cover our blood stained streets with dried up gum,
Where kids have holes in their last pairs of shoes,
Where daddy left mummy and mummy’s left poor.
Welcome to Tottenham.
Where if you look like me then it’s harder for you,
Where everybody’s equal unless they’re darker than you.
Where the police see colour before they see the crime,
Where children get stopped and searched and aren’t allowed to ask why.
Welcome to Tottenham.
Where the drug addicts sit at the back of the 149.
Where education and sports are the only ways to shine.
Where we ride around on stolen scooters,
Where we can’t afford tuition so the streets are our tutors.
Welcome to Tottenham.
I love but I hate my home,
I still listen to the voicemails of my dead peers in my phone,
I live in a nightmare. I had to learn how to dream,
I’m afraid to open up because you won’t survive if you’re weak.
Welcome to Tottenham.
The devil’s playground.
We fight over streets we don’t own,
Knife crime’s on the rise because the beef can’t be left alone.
Why does no one understand that we just want our youth clubs back,
Why do they claim they’re not racist but label the violence here black?
Welcome to Tottenham.

What is SEO and Why is it Important for Your Business?