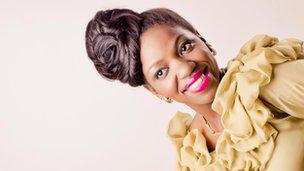 Bang! is Tanzania’s first lifestyle magazine.  Nine years ago, without any experience in journalism, Tanzania’s Emelda Mwamanga started her country’s first lifestyle publication, Bang! magazine, which now also reaches audiences in neighbouring Uganda, Kenya and Zambia.
She had returned home from South Africa shortly after completing a degree in Industrial, Organisational and Labour Studies at the University of Cape Town, and was working as a human resource officer for Coca Cola when she decided to publish her magazine on the side. 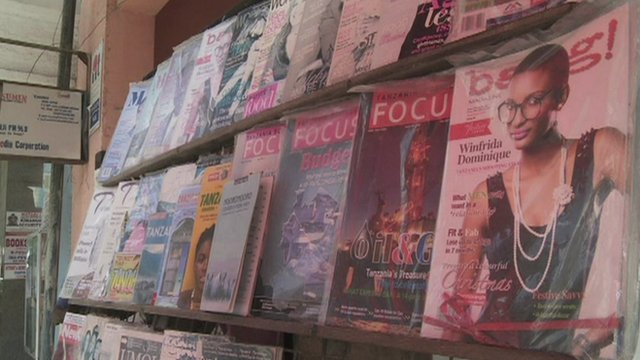 Her starting capital was $3,000 (£2,000) that she had saved from her job and $6,000 she borrowed from a bank.
“Since I was in university, I had this passion of magazines and I used to collect a lot of lifestyle magazines in South Africa. Back in Tanzania, I saw a huge gap – we didn’t have a lifestyle magazine,” she told the BBC’s series African Dream.

When you dream, shoot for the moon. Even if you miss, you’ll land among the stars”

“We didn’t actually have a magazine that showcased the talents, the good things and gave hope to people”.

According to her, the only magazine available at the time “was donor-funded and they’d talk about HIV/Aids and show people who are sick and stuff, but it looked like in Tanzania there’s no creativity at all”.
Mrs Mwamanga says she had no idea how long the magazine would last but was determined to prove that she could make a success of it.
“The first issue that came out was actually a flop. It was a beautiful magazine but, you know, I didn’t have the insight or background of working in the media,” she told BBC Africa’s Tulanana Bohela.
However, she sought encouragement from many friends who liked the look of the glossy magazine and took inspiration from its name – Bang! – which stands for “Believe And Never Give up”.
“Some people thought it was a great idea and I really focused on the people who were very positive,” she said.
Wider appeal
The first few editions were put together by volunteers as she could not afford to pay them salaries. But reassurance came from her father.

“My father is a businessman, he has his own company so he was behind, supporting and advising me even in the beginning when it was very, very difficult,” the entrepreneur remembers.

The magazine was originally aimed at young people but it quickly became a hit with a more mature audience as well.
The appeal, Mrs Mwamanga believes, is down to the broad range of topics it covers, from fashion and health to finance and business.
“We talk about different businesses and we profile role models. They are purely Tanzanians who have done something good,” she explained.
Her company, Relim Entertainment Ltd, now employs 10 people full-time and has an annual turnover of around $250,000.
Despite the tough climate for printed magazines – especially now that online publications are becoming increasingly popular – she wants to expand and produce different ones specialising in areas such as health and education.
As for Bang! she says that she wants it to reach a much wider audience across the continent.
“I want Bang! magazine to be the African magazine. By saying that, I mean I want one day to see my magazine in Rwanda, Burundi, in South Africa, I go to Congo and see it, I want to go to West Africa and see Bang! magazine there,” she told the BBC.
Daring to dream
She also wants to see more women in business and, in order to help that happen, she established the non-profit Dare to Dream Foundation in 2007.
Its mission is “to inspire, empower, motivate and give new ideas to women who want to grow their businesses, pursue greater entrepreneurial ventures and break the glass ceiling in business and at work places”. 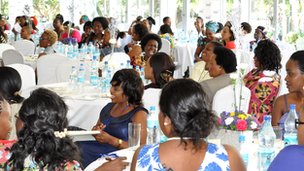 The foundation, which targets women between 18 and 45 years old, organises conferences and training sessions that focus on the development of entrepreneurial skills and the exchange of information on human rights and gender equality issues.
Mrs Mwamanga herself has benefitted from women’s empowerment initiatives and in 2009 she participated in the Fortune/US State Department Global Women’s Mentoring Partnership programme.
She was mentored by Anne Moore, retired CEO and Chairperson of Time Inc.
“God gives us dreams a size too big so that we can grow in them. When you dream, shoot for the moon. Even if you miss, you’ll land among the stars,” the Tanzanian entrepreneur advises other women.
“Believe in yourself, because we all have power to make the impossible possible. Work hard, have faith, pray a lot and let the rest to God.”