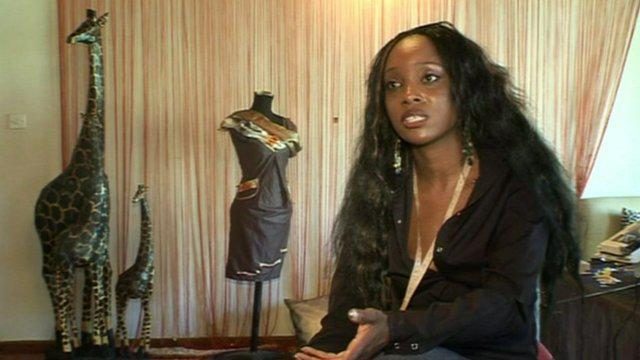 Malawi’s Lilly Alfonso dreams about her future in colours as vibrant as those of the clothes she makes.

New York, London, Milan and Cape Town are some of the cities that come to her mind when asked where she would like to see her designs 10 years from now.

As a matter of fact, some of her clothes were already shown in the UK capital last year, during the Africa Fashion Week, but she is convinced that this is just the beginning.
“Everywhere where fashion is, I want to be there, and I see myself making it. I’m not doubting on that one. I dream big and I’m dreaming in colour,” she told the BBC’s series African Dream.

Everywhere where fashion is, I want to be there, and I see myself making it. I’m not doubting on that one. I dream big and I’m dreaming in colour”

According to the designer, her passion for fashion was already there as a child when she loved to play with fabrics in the southern city of Blantyre, where she grew up.

“I’d say fashion, I was born with it. I started when I was young, at the age of six. My mum would bath me and dress me, and I would totally change the design of the dress,” she remembers.
“As I grew older, people liked what I was designing, what I was wearing, so that inspired me and I started working on other people.”
She had two second-hand sewing machines that belonged to her mother and she started off with a tailoring business, when she was 24, but she says that fashion designing was still “a mere hobby”.
That hobby, however, helped her to launch her career when she won the Malawi Fashion Edition (FAME) award as country’s best fashion designer three years ago.
Financial challenges
“I never thought I was a designer until 2010 that I had a lot of clients and I’d design for Miss Malawi, I’d design for quite a lot of people,” Mrs Alfonso told BBC Africa’s Raphael Tenthani.

These days her studio – located in her house in an upmarket suburb of the capital, Lilongwe – is a bastion of activity as people organising weddings and other events troop to her for advice.

Although designer clothes are not cheap anywhere in the world, Mrs Alfonso says that her prices depend on the client that she is working for.
If the product is going to Europe, for example, she knows that she can ask for more money if she uses higher quality fabrics.
Back home, however, she can be more flexible with her pricing.
“Our economy right now is not really doing well so… I always use any reasonable resources to accommodate my country, for the people that can’t afford the other fabrics, but I still design the same design,” she explained.
Recently, Malawi’s currency, the kwacha, lost almost half its value and this has put a strain on the running of businesses.
Also, the inflation rate is hovering at around 33% while bank-lending rates are at about 40% in the southern African country.
All these factors are presenting extra challenges for people who, like Mrs Alfonso, want to expand their businesses.
“I’m having problems with raising the money to have massive production… to be able to reach my goal, I still need extra 10 machines,” she said.
“The prices of the fabric have been changing, the prices of everything have been changing; keeping the staff has been a problem because of how to balance up with the economy as it is,” added young entrepreneur, who has seven employees and many other weavers and tie-dye fabric designers.
Nurturing talent

Despite these challenges, Mrs Alfonso encourages other people to pursue their dreams and start their own businesses.

“I’d advise everybody who has any talent – it’s not only in fashion – I’d advise everybody to believe in themselves, and do whatever it takes to make it happen for them because God gives us this blessing but it’s only us to start acting on it.
“So if you know that you can do it, don’t stop it; no matter how criticism is, work on it because criticism is what makes us best. Believe in yourself and do it, and go for it”.
Now that she is 33 and has two daughters, she also recommends parents to support their children’s creativity.
“If you see that your child is gifted in a particular area – encourage them to pursue that alongside school.
“If you see a gift in a child – they need to research on that particular field and support the child in every way,” the award-winning designer who liked playing with fabrics at the age of six said.

Stormzy – His Stunning Path to Success