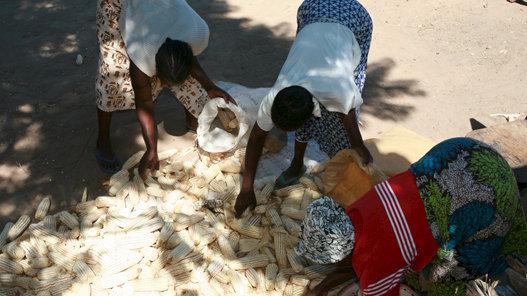 The last couple of years Zambia, in southern Africa, has experienced economic growth.  But the money has not gone to the poor that constitute 60 % of the population.  Especially in rural areas, climate changes, HIV/AIDS and the lack of equality make it difficult for Zambians to bring food to the table.

Zambia is one of the world’s poorest countries.
A great deal more than half of the 12 million Zambians live below the poverty line, and there is nothing to suggest that this development is about to change.
Officially, the country is a democracy, but the political system is characterised by corruption, and the poor and marginalised have no real influence on the decisions that are made.
One million Zambians are infected with HIV or AIDS. This epidemic is paralysing the country’s development and makes it even more difficult for the affected families and local communities to make a living.
Zambian women’s rights are being suppressed, in the political systems as well as in the homes.
Nearly every other adult Zambian woman has, at one point, been subjected to violence and assaults.

WHAT WE DO IN ZAMBIA

DanChurchAid has worked in Zambia since 1973.
In 2011 we formed a joint Zambia programme together with our Norwegian and British-Irish ACT Alliance partners.
We and our partners work for:

Norwegian Church Aid handles the day-to-day running of our office, while DanChurchAid and British-Irish Christian Aid collaborate in planning and evaluating the programmes and in contributing financially.