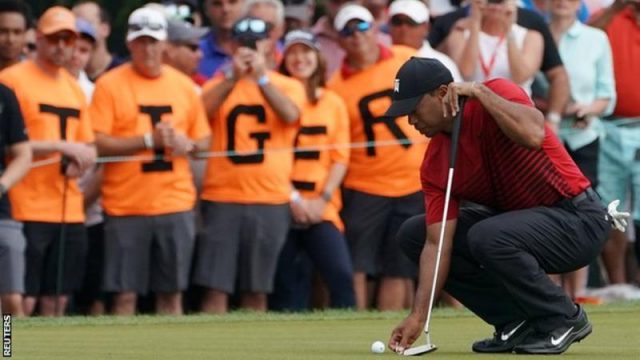 Woods needed a birdie on the final hole to force a play-off at the Valspar Championship, but could only make par.  Rarely do UK headlines go to a player finishing second behind a British champion on the PGA Tour, but that was an inevitability in the wake of Tiger Woods finishing runner-up to Paul Casey last Sunday.
Take nothing away from Casey’s brilliant victory at the Valspar Championship, his first on the American circuit for nine years; it was a terrific performance in Florida, providing a long overdue win for the 40-year-old Englishman.  But Woods grabs the limelight because his astonishing resurgence has sent a bolt of electricity through the game. The fact he was in contention at Innisbrook over the weekend generated huge sporting attention around the world.
NBC, who were televising the event in the United States, reported that their third-round figures were up 181% and it was their highest-rated Saturday golf broadcast for a dozen years.
The additional numbers tuning in over the weekend were treated to a breathtaking putting display from Casey – just 21 putts in his final-round 65.  But even as he celebrated this much-cherished victory, the chants from the hordes at the course were for Woods.  And as Casey acknowledged, the buzz generated by the 42-year-old – playing only his fourth tour event since recovering from fusion surgery, his fourth back operation – was considerable.
“I’m amazed at Tiger’s clubhead speed this week – absolutely outstanding,” Casey said. Woods is averaging 122.5mph, which is second on the PGA Tour’s stats and during the third round registered 129.2 mph – the fastest this season.
Average clubhead speeds

Tiger Woods is second to only Keith Mitchell for the fastest average clubhead speed (mph) on the PGA Tour in 2017/18.  These figures show Woods has become fitter and stronger than anyone could have imagined.
He looked good at the Honda Classic, where he finished 12th, while at Innisbrook the following week he looked something like the man who utterly dominated the game for two decades.  All that was missing was the clinical edge he used to summon on a Sunday, a ruthlessness that earned him 14 major titles and 79 PGA Tour victories.  Number 80 does not feel far away.  Who knows? It may come at Bay Hill this week, where he has won on eight previous occasions. Or possibly at next month’s Masters, the major he has won four times before.
In January I predicted on BBC Radio 5 live that he would win at Augusta. Honestly, it was a mischievous comment aimed at stimulating a radio discussion and not much more.
Most people laughed at the notion and with justification. After all, it was Woods himself who said at the start of 2015: “Where is the light at the end of the tunnel? I don’t know.”
In November the following year he revealed: “If you couldn’t get out of bed, how would you feel about your future about doing a lot of different things in life? That’s where I was.”  And as recently as September last year, he said: “I’m not doing anything golf related. I don’t know what the future holds for me.”

Tiger Woods last won a major in 2008, when he shrugged off a leg injury to beat Rocco Mediate in a US Open play-off  Now, few are laughing at the notion of him contending for a fifth Masters Green Jacket. The bookies have him as third favourite behind Dustin Johnson and Justin Thomas.  This is turning into one of the greatest of sporting stories. Since his last major success at the 2008 US Open he has undergone those multiple surgeries and suffered an epic fall from grace over revelations in his private life.
Woods’ aura of invincibility was shattered in every respect. Yet, somehow, he has pieced it back together, bit by bit.

It is a story of rehabilitation that transcends sport.  He has recovered his strength and is now showing he still has a golf game to compete at the very highest level. Most of us thought he was finished and he wondered whether he even could function physically outside the sporting arena.  It is for these reasons that people are now tuning back into golf, and why so many viewers saw Casey’s brilliance as well as Woods’ efforts to chase him down.  Woods’ 40-footer for birdie on the 17th to give him a chance, even on a final day where his game was not as sharp as he would have wanted, was the stuff of old.
England’s Paul Casey beats Tiger Woods by one shot.

Tiger  looks in the mood to build from this position, which remains still very early in his comeback. There is a generation of young stars to be taken on – the likes of Thomas and Jordan Spieth as well as Rory McIlroy – who do not bear the scars of past Tiger maulings.
“I just so want the young guys to see what we saw for such a long time,” said the 40-year-old Casey. “It would be really, really cool.”
It is a compelling narrative enriched further by 47-year-old Phil Mickelson returning to winning ways the previous week in Mexico and now Casey overcoming what had become a massive hurdle.  And with this week’s Arnold Palmer Invitational at Bay Hill in mind, the noise level may just ratchet up another notch or two.
As Woods said: “I’m very excited. It’s a golf course I like. I’ve played well there throughout the years and just haven’t been back in a couple years.
“Nice to get back.”

Solutions for a better Education