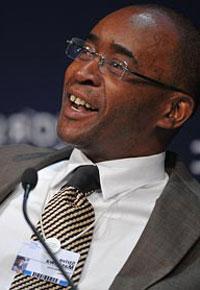 When Strive Masiyiwa, Zimbabwe’s richest businessman, took the stage at Morehouse College to accept the honorary degree conferred upon him by the college, he gave the students a valuable piece of business advice:

“If you really want to be a success, identify a human need and reach out to meet it…perhaps you’ll make money along the way, but I know something: If you reach out to meet the needs, you will wear the crown.”
The 51-year old founder and CEO of EcoNet, a mobile phone company, ought to know. He made the Forbes list of Africa’s Richest People, coming in at 34, for his work telecommunicationswork and his work in philanthropy. EcoNet launched in 1998 in Zimbabwe and quickly became the largest telecom company in the country. Masiyiwa has since moved the company to Johannesburg, South Africa, where it has earned him a net worth of $280 million. He also founded an organization that provides scholarships to orphans, many of whom lost their parents to AIDS.