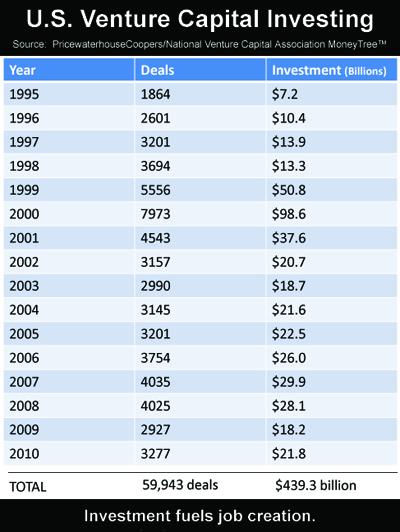 Unfortunately, no such active community exists in Black America.

This week, the National Venture Capital Associationand the Angel Capital Association meets in Boston for the ACA Summit (April 4-6, 2011) and NVCA Annual Meeting (April 6-8). Together, these organizations are comprised of more than 500 groups of private equity investors who make up a large portion of the reason why the 21st century Innovation Economyraces along at breakneck speed and offers solutions to the problems of high rates of unemployment and diminishing levels of wealth.

There are no such comparable gatherings in Black America.

During the same time period, venture capital experienced its largest boon since it was first introduced in the ’50s.

In the ’50s and ’60s Blacks were legally and institutionally barred from many facets of the American Dream. In the 70s, Americans were still consumed by widespread, overt racial disparities, some of which seeped underground during the ’80s and ’90s, when private equity capital enjoyed its heyday and the establishment of a firm economic investment infrastructure and high-growth entrepreneurial culture

None of that job- and wealth-creating infrastructure was built in Black America … or any broad regions comprised primarily of any racial minority demographic groups.

The culture of high risk-high return capital investment had been established by the 80’s, which led to rapid growth in the technology sectors. This laid the foundation and established conditions in which high growth startups could emerge. These startups have gone on to revolutionize, if not create industries, including biotechnology (Genentech), personal computers (Microsoft, Apple) and eventually internet-based commerce including social networking sites like Google, Facebook, etc…

The private equity capital investment community laid the framework for the high-growth Innovation Economy today, which has replaced the former manufacturing economy, which replaced the agrarian economy.

Today, it is private equity capital investments from high net worth individuals and SEC-qualified investors (both known as angels), along with venture capital, that ignite the fire blazing into new technology frontiers. Fueling that fire is science, technology, engineering and math (STEM) education and those pursuing professions in the various STEM fields.

Since 1995, more than 50,000 companies have received a total amount greater than $439 billion in venture capital equity investments. That’s not counting angel investments, which typically enter in the equation early and exit earlier than venture capital.

Much of this activity has somehow escaped Black America. However, it is also clear that very few of those companies are led by Black entrepreneurs. In 2010, Black tech entrepreneurs received just 1% of technology based equity investments.

Likely few Blacks will find their way to the ACA and NVCA events in Boston this week, where many of the people responsible for the success of high-growth entrepreneurs (who have created jobs that reduced the unemployment rate and generated more wealth for investors) will come together to network, learn, share and improve their infrastructure.

So, where is Black America?

While the recent unemployment numbers brought good news for the nation as a whole, with total unemployment dropping to a two-year low, it left a sour taste in the mouths of Black Americans, who must contend with the notion that the rate of unemployment today for Black Americans remains double the rate it is overall for the nation. That point hasn’t changed much since Dr. King bemoaned being left out of the American Dream when he articulated his famous “Dream” speech in August of 1963.

Moreover, a May 2010 data report by the Institute on Assets and Social Policy reveals that wealth is being generated in America at an astounding rate, yet has managed to bypass Black America. This report shows a quadrupling of the wealth gap between Blacks and Whites over the 23 years the study was conducted (1984 – 2007).

It’s not a secret how wealth is created in America on a mass scale. Other minority groups have managed to figure out the formula.

Asian Americans have an investment infrastructure. They own hundreds of companies in Silicon Valley. They also produce STEM-educated professionals and high-growth entrepreneurs at a significant rate.

Black Americans are no strangers to entrepreneurship nor innovation. Our focus, however, has been on lifestyle entrepreneurship ventures primarily rather than high-growth equity backed enterprises that produce more fast-growing employer firms.

It is no secret the focus of economic activity in Black America has targeted conducting business with the government as a prime channel of activity. Thus, major investments of time, energy and money have been made in obtaining political cache in attempts to affect public policies that open doors of access and opportunities for a tiny percentage of Black-owned small businesses.

This focus on government solutions, which proved prudent during the 20th century battles over constitutional citizenship, must be transformed to fully engage in the 21st century quest for economic equity citizenship.

If Black America is to change the current paradigm of a widening wealth gap compared to White America and a rate of unemployment consistently much higher than the national average, it must recognize an immediate need to establish its own private equity investment community and establish strong ties with the current infrastructure that has decades of experience.

Perhaps a step in the right direction would be to show such a significant presence at the equity capital investor gatherings in Boston this week to a degree that simply the sheer attendance numbers alone would raise eyebrows and interest. Or perhaps there should be a convening of the minds within our community to address this important issue?

What’s preventing us from establishing such a valuable infrastructure and ecosystem?

The numbers speak for themselves. While the rest of America has figured out how to create both jobs and wealth, Blacks have consistently lagged behind in both. The missing element in Black America is a viable, growing equity capital investment community that can fuel high growth entrepreneurship and Black participation in the Innovation Economy.

Rocking braids or cornrows can be taboo for Black women. Stylists are fighting stigmas one style at a time

Diversity Led the Charge for a more Diverse and Fair world...