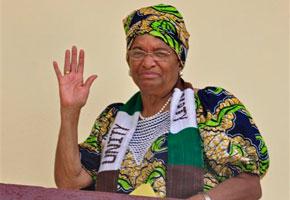 Liberian President Ellen Johnson-Sirleaf, enthusiastically welcomed the Nobel Peace Prize award on Friday, describing it as recognition for years of fighting for democracy in her country. The announcement comes just days before Sirleaf seeks re-election for a second five-year term next Tuesday.

She’s being challenged by two men: she’s in a tight race against fellow Harvard University graduate, Winston Tubman, of the main opposition party, Congress for Democratic Change, who’s running mate football legend George Weah.
As Africa’s first democratically elected female president, Sirleaf told reporters in Monrovia, the capital, that she was very excited about winning the award along with fellow Liberian peace activist Leymah Gbowee and Yemeni activist Tawakul Karman.
“I am pleased to have been selected for the Nobel Peace Prize, one of the most important prizes that the world has to offer. I am also humbled by it because so many Liberians have worked for peace in our country. Leymah Gbowee is another recipient of it. She’s a well deserving winner because she mobilized the women,” he said.
She said the award was a signal from the international community that Liberians should stay on the peaceful path they’ve been on since she took over as president five years ago after years of civil strife.
“I have a paid heavy price here that many people don’t realize,” she said. “I have gone to prison more than once, more than one prison at the time that many people did not know of this struggle, and over the years I have been very consistent about the things I believe in.”
Liberians across Monrovia shared in their president’s excitement and described the award as another significant boost to the country and women’s rights.
In its citation, the Nobel committee said Sirleaf and her co-winners–activists Leymah Gbowee of Liberia and Tawakkul Karman of Yemen– were being honored for “their non-violent struggle for the safety of women and for women’s rights to full participation in peace-building work.”
“We cannot achieve democracy and lasting peace in the world unless women obtain the same opportunities as men to influence developments at all levels of society,” the committee added.
In October 2000, the UN Security Council adopted Resolution 1325 which for the first time made violence against women in armed conflict an international security issue. It underlined the need for women to become participants on an equal footing with men in peace processes and in peace work, in general.
Across Africa, women are the backbone of their families and their countries’ economies, but they are rarely given a chance to participate to their full potential in the political arena. Analysts say that where women have been offered leadership roles, they’ve often done far better than men to steer their communities towards development rather than conflicts.
In recent years, scores of women have proved worthy of leading their nations or large ministries or major causes, including Kenyan environmentalist Wangari Mathai, another Nobel Laureate who passed away last week and will be buried this weekend. Women were also at the forefront in the Arab spring that swept through North Africa this year.

How Beyonce's Album – Lemonade – made £3 million a day.