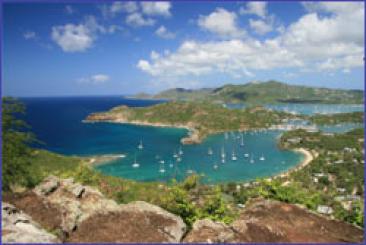 ST. JOHN’S, Antigua, Sunday January 27, 2013 – The Government of Antigua and Barbuda has successfully partnered with several international groups and countries through the regional Caribbean Renewable Energy Development Programme (CREDP) project in launching the first renewable energy project on the island.

The 6-kilowatt photovoltaic power system at the Nelsons Dockyard Shirley Heights Lookout was aided by the Organization of American States (OAS), the European Union, and the governments of the United States of America and Germany.

A report on Sunday said the project is expected to provide electrical power “to cover certain elements of the operations” at the Lookout, one of the island’s premier tourism entertainment centres.

General Manager at the Shirley Heights Lookout, Valerie Hodge, said “the project constituted an important asset for the location, which was not connected to the existing light and power company the Antigua Public Utilities Authority (APUA) grid and was totally dependent on costly generator power to supply the various electricity needs.”

Hodge said the initiative received financial and technical assistance from the Energy and Climate Partnership of the Americas (ECPA) through the OAS office. “The solar system is installed along the southerly slope of the Shirley Heights, and is an element of the government’s efforts to promote the sustainable use of renewable energy in Antigua and Barbuda,” the statement said.

The for-profit sector steps up to play its role in Africa’s economic development.

How the IMF wrecked Jamaica