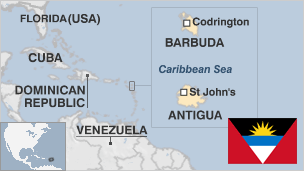 Antigua and Barbuda is one of the Caribbean’s most prosperous nations, thanks to its tourism industry and offshore financial services.
The country’s strength lies in its tropical climate and good beaches, which have made it popular as a stop-off point for US cruise ships and have attracted large investments in infrastructure.

Antigua is the main population centre and the focus for business and tourism. Relatively-undeveloped Barbuda is home to smaller, exclusive resorts and a sanctuary for frigate birds.

But a reliance on tourism makes the nation vulnerable to downturns in the world market. Internet gambling sites based in the country are an alternative source of revenue. However, Antigua and the US have been locked in a trade dispute over American restrictions on online gaming. In 2013 Antigua upped the stakes by applying to the World Trade Organisation for a permission to run what amounts to a pirate website circumventing copyright law.

For decades Antigua and Barbuda’s politics was dominated by the Bird family, with Vere Bird being the country’s prime minister from independence in 1981 until 1994, when he was succeeded by his son, Lester, who spent a decade in office.
Underlying this stability was a succession of scandals, including allegations of corruption. The Bird family was also accused of abuse of authority.
Antigua and Barbuda, once described by the US as a centre for money laundering, was recognised by an international task force in 2001 as being “fully cooperative” in the fight against the activity.
In 2009, the country’s economy – and the reputation of its financial regulatory system – was rocked by news that its single biggest investor, Texan billionaire Allen Stanford, had been charged with massive fraud by the US authorities.