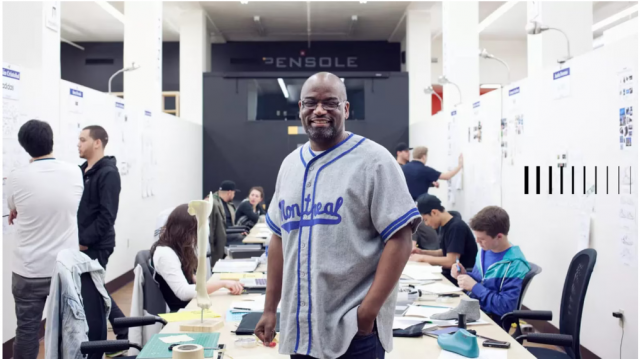 Dr. D’Wayne Edwards is the most prominent Black designer in the footwear industry. With a 32+ year career, including over three decades from L.A. Gear, Nike and Jordan, Dr. Edwards is credited with paving the way for young Black design talent to have a career in the sneaker industry.

“HBCUs have some of the brightest minds in our country, but lack access to design education. We’re here to change that.”

PENSOLE quickly became the preeminent footwear design school in the world specializing in footwear, functional apparel and accessories, color & materials, prototyping, and concept making. It operated as a popular feeder school for some of the industry’s top footwear brands and retailers and has placed more than 500+ former PENSOLE alums in positions working professionally for some of today’s top brands: Nike, Under Armour, Adidas, New Balance, Brooks, Vans, Puma, Timberland, JORDAN, and others globally.

D’Wayne Edwards background
Around the time D’Wayne Edwards was graduating high school in Inglewood, CA in the 1980’s, Otis Art Institute in Los Angeles and Parsons School of Design in New York offered a joint program in apparel design. Edwards, the youngest of six kids, had quiet aspirations of designing shoes and the Otis/Parson program wasn’t far from where he grew up. But design school, or any form of college, really, wasn’t on his radar. He couldn’t afford tuition and he needed a job.

In July 1988, Edwards took a temp job as a file clerk in accounts payable at then popular footwear brand, L.A. Gear. Every department in the building housed a small wooden suggestion box. “Anything you wanted to put in there, you could; ways to improve the company or morale,” he recalls. “I have always drawn sneakers. I drew on 3 x 5 index cards.

I did it every day for six months and dropped them in the box.” One morning in January 1989, Edwards was paged over the company’s loudspeaker system, asked to report to company president, Robert Greenberg’s office. “I knew it was bad news,” says Edwards. “I walked in slowly and he said, ‘Have a seat.’ He had 180 of my sketches sitting on his desk. He said, ‘Are you the one who has been doing this to my suggestion box?’”

As an educator, Dr. Edwards has taught and lectured at some of the premier schools in the world, including ArtCenter, Parsons, MIT, and Harvard, and has spoken at the Clinton Global Conference.

A Breath of Fresh Prince : How it Started and Benny Medina’s early life...