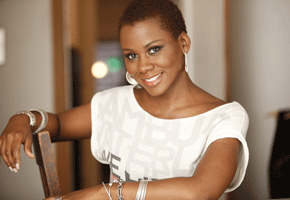 ChicRebellion programming covers the gamut—from fashion and food to parenting and entrepreneurship. The network has begun filming season two of its premier series: “White Noise,”a reality show following the fast-paced life of former model-turned-businesswoman Tamiko White; fashion and beauty show “In Her Shoes”; food and travel series “Dine Out”; and parenting program “Brand: Mom.”
ChicRebellion also has a variety of new series in development, including fitness, kids, home & design, and what Fluker described as “a smart and sexy” news show. Besides developing its own programming, ChicRebellion wants to become an outlet for other content developers of color. “As a network, we also want to be the place where other content producers who have created wonderful Web series that you may or may not find on YouTube to have a destination where their projects are featured, so syndication is definitely a part of the long-term plan,” says Fluker.
Fluker is no stranger to the media industry.  Her 15-plus year career in media included holding such positions as Editorial Director of Entertainment and Beauty & Style at iVillage.com, Managing Editor at Condé Nast Digital, Executive Editor of Digital Media at Black Enterprise and Director of Digital for Latina.com. She was also Entertainment Editor of Essence, Founding Managing Editor of Suede and Managing Editor of Vibe and Vibe Vixen.
With ChicRebellion, Fluker says her main concern is creating meaningful content. “As someone who has worked in media for more than 15 years at both mainstream and niche outlets–and who is a passionate consumer of content–I noticed the gaping hole that existed for quality programming targeting women of color, especially Black women and Latinas,” she explains. “There are great shows dispersed here and there, but there was no network–Internet or otherwise–that reflects her diverse interest, or her dynamic influence. ChicRebellion.TV fills that void by meeting her where she is, online and on-the-go, with a beautiful destination and content she can be proud of.”
Having the vision is one thing, fulfilling it is another, especially when it starts out as a on-woman show. “Truthfully, the biggest obstacle has been doing it alone. This goes beyond the money, because, although difficult, you can always find the money,” says the native New Yorker. So Fluker has started to pull in with equally passionate and qualified people to help ChicRebellion reach its full potential. “This is about knowing that you are far greater with a kick-ass team you can trust than you ever will be alone. I brought in wonderful people to work with me when we were filming four series simultaneously last summer, and I am blessed that I am surrounded by people in my personal life who love and support me endlessly,” she explains, but adds that most responsibilities still rest with her. “So I did have a group of people in the trenches with me at that time, for sure. But the way I am overcoming this obstacle now is to realize that, while in the beginning when you’re “proving” your idea, there are some things you just have to pick up and do yourself (which is still the case). When you start to really put qualified people in place who will be a part of the foundation for your business–a CFO, a CTO, and a CMO, for example–that’s when your business truly gets its legs. And the people who rock with me now will be the people who rise with me later.”
As ChicRebellion expands, Fluker is looking to outside investors. Fluker, who holds a B.A. in English from Hampton University, initially self funded the venture. “ChicRebellion.TV is a network, and the long-term goal is for it to be taken seriously as a network. I am very passionate about this audience–women of color–and the images we have (or don’t have) out there that are a reflection of who we are,” shares Fluker. “The goal is for ChicRebellion.TV to be her go-to network for programming that’s entertaining, inspiring and engaging, and that she can look at and proudly see her multi-faceted self.”