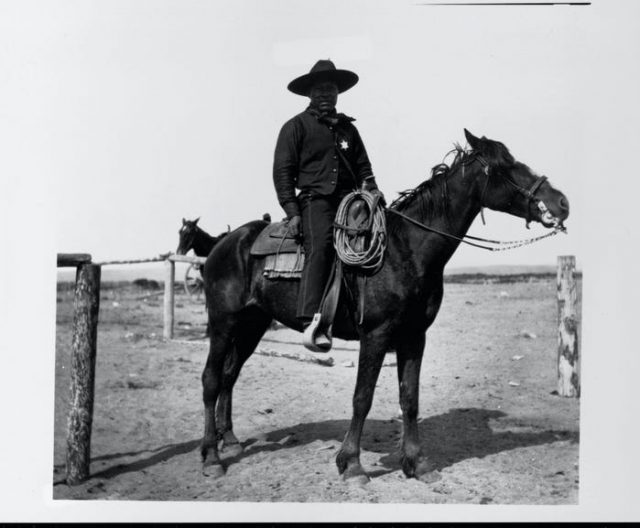 The US has a grim history of underrepresenting and inaccurately portraying African American history in schools.

A 2015 report conducted by the National Museum of African American History and Culture and Oberg Research found that while most teachers acknowledged the importance of teaching Black history, only 8% or 9% of history class time in US schools is devoted to the subject.

Additional research found that students across the US were familiar with monumental figures such as Harriet Tubman, Dr. Martin Luther King Jr., and Rosa Parks, but that in a majority of states, students often receive Ds and Fs when tested on the Civil Rights movement.

The US has a long way to go to repair the education system to represent African American history. Here are 10 historical moments that you probably didn’t learn in an American school.

The image of the Wild West cowboy is one of America’s seminal pieces of lore. In movies and books, we learn about the trailblazing, horse-back riding legends of the great Western plains. But in nearly every depiction, those cowboys are white.

In reality, historians estimate that one in four American cowboys were black.

Black cowboys have a rich, complicated history in the US and remain an important part of American culture to date. The cowboy lifestyle first came into play in Texas, when American settlers would invade the then Mexican owned-territory in the early 1800s. Americans moving into the territory brought enslaved people with them and began setting up plantations. By 1860, after Texas became a part of the Union, an estimated 30 percent of the population was Black.

Following the abolition of slavery, many of those people became in-demand as cowhands. When Texas joined the Confederacy, many slaveowners went off to fight in the Civil War, leaving the people they owned to tend the cattle. But when the war ended, freed people found themselves in high demand for positions as cowhands to ranchers across the south.

It’s also believed that the idea of the “Lone Ranger” was inspired by a Black man named Bass Reeves. Born in slavery, Reeves escaped his position of servitude and eventually became a US Deputy Marshal, known for his excellent skills as a marksman, and for riding a silver horse.

The company was founded by Charles Richard Patterson, a man born into slavery in Virginia in 1833. Between 1841 and 1843, the Patterson family relocated and settled down in Greenfield, Ohio, where Patterson became skilled in blacksmithing and found working making high-quality carriages.

By 1873, he formed a business partnership with a white man named J.P. Lowe, and just two decades later he became the sole owner of CR Patterson & Sons. From 1893 to 1910, the company listed around 28 models of buggies and carriages.

After Patterson died in 1910, his son, Frederick Patterson, took over the company and transitioned it to horseless carriages, and eventually to the Patterson-Greenfield automobile. Frederick was a leading figure of his own — he was the first black man to play football for The Ohio State University. The company gained success and great pride with its automobile model, which was originally listed at $675.

To this day, C.R. Patterson & Sons remains the only Black-owned and operated automobile company in American history, according to the Smithsonian National Museum of African American History and Culture.

In the midst of the coronavirus pandemic, one of the hottest topics of discussion is when, and how, we can quickly get a vaccine developed.

But we wouldn’t even be discussing that opportunity if not for the introduction of African inoculation techniques by a man named Onesimus.

In the early 16th century, Onesimus was sent from Libya to Boston to the Puritan church minister Cotton Mather. During his time as a slave to Mather, Onesimus told him about a centuries-old technique of inoculation used in Africa. Onesimus described how Africans would extract materials from an infected person and scratch it into the skin of a non-infected person to create a system of immunity.

Highly intrigued, Mather convinced a doctor in Boston to experiment with the technique when a smallpox epidemic hit the area in 1721.

Though the technique was considered highly dangerous at the time, Onesimus opened up the path for experimentation with vaccine development, and his information was eventually used to inoculate soldiers during the Revolutionary War.

During World War II, the US implemented a number of xenophobic measures to limit the success of Jewish refugees and asylum seekers escaping Nazi Germany. Finding a job was a difficult task for refugees, and with very little money, they had to prove that they could support themselves without being a “public charge” to the nation.

Despite the fact that the government attempted to limit the success of Jews, administrators at historically Black universities and colleges worked to hire and save the lives of 50 Jewish scholars. At institutions such as Howard University in Washington, DC and Tougaloo College in Mississippi, Jews were brought on to teach in an accepting environment.

This relationship often led to special programs to promote meaningful conversations between Black and white people.

Katherine Johnson was born in Sulphur Springs, West Virginia in 1918 and excelled in mathematics from a young age. After skipping several grades throughout primary school, Johnson attended West Virginia University, and was handpicked as one of three Black students — and the only Black woman — to attend WVU’s graduate program.

In 1952 she began working for the National Advisory Committee for Aeronautics (NACA) which slowly transitioned into the program we know today as NASA. There, she worked on an investigation of a plane crash and analyzed date from flight tests.

When the Soviet Union launched the satellite Sputnik in 1957, Johnson transitioned into mathematics for space travel and became a part of the Space Task Force, which was the first official move into space exploration. Johnson co-authored a report laying out equations needed for orbital space flight and became the first woman credited as a research author for the team.

Johnson’s orbital calculations became seminal, and she conducted, by hand, one of the final tests before successfully sending John Glenn into space. Following that success, Johnson’s calculations were used to send a man to the moon, marking a historic moment in US space flight.

In 2015, President Barack Obama awarded Johnson the Presidential Medal of Freedom to honor her contributions, and she was the subject of the 2016 movie “Hidden Figures,” which dramatized her work at the space agency.

While the story of Rosa Parks refusing to give up her seat on the bus for a white person has become a defining moment in African American history, there were actually several Black women who did the same thing before her. One of those women was 15-year-old Claudette Colvin.

On the same bus system in Montgomery, Alabama, Colvin refused to give up her seat to a white passenger nine months before Rosa Parks did. She was escorted off the bus by two police officers, arrested, and hit with a fine. But she didn’t stop there. Colvin then went on to be one of four women in the Browder v. Gayle court case, which ultimately overturned bus segregation laws in the state of Alabama.

GPS technology is everywhere, from the location finder on your phone, to the digital maps you use on a drive – and it’s all thanks Dr. Gladys West.

West was a pioneering mathematician whose calculations were instrumental in using satellite data to determine precise locations. In 1956, West began working at the Naval Surface Warfare Center in Virginia, as the only black woman and one of only three Black employees.

West began collecting and processing data from satellites and used the information to put together precise models of the earth’s shape. She became lauded for her work and was nominated for a reward by her department in 1979. After that, she was named the manager for the first satellite project that could remotely sense oceans, known as the Seasat radar altimetry project.

Though her work was crucial to developing GPS technology, it wasn’t until 2018 that Dr. West became widely recognized and was inducted into the Air Force Space and Missile Pioneers Hall of Fame.

Founded in 1906, the district of Greenwood in Oklahoma was developed on Native American territory and quickly became settled by Black Americans.

Oklahoma was seen as a sort of safe haven for Black Americans looking for work, and after the Civil War, over 50 Black townships were founded throughout the state.

Greenwood became one of the wealthiest Black communities in the US, and a number of Black-owned and operated businesses, restaurants, hotels, movie theaters, shops, banks, and hospitals were set up by entrepreneurs.

The community operated as a self-reliant area, and Black business owners would often pool together their resources to uplift others who wanted to start their own companies.

But during a period of horrific racial violence, members of the Ku Klux Klan attacked Greenwood and left hundreds of black people dead, and thousands of homes destroyed. This harrowing act of violence became known as the Tulsa Massacre of 1921.

Martin Luther King Jr.’s “I have a dream” speech is considered one of the most monumental moments of the Civil Rights era – and he delivered those famous words on the spot.

During the 1963 March on Washington, King stepped up to the podium with a well-planned speech provided by his writer, Clarence Jones. But as he looked out at the 250,000 person audience, his passion led him to move off course, and say exactly what he was feeling.

The result was one of the most poetic proclamations of American history, which came straight from the heart: “I have a dream that one day this nation will rise up, live out the true meaning of its creed…”

When Bessie Coleman’s brother came home from fighting in World War I with stories of female pilots in France, she knew that was what she wanted to do.

But aviation programs wouldn’t accept her. She was a woman, an African American, and a Native American. So instead, Coleman took off to France.

She attended the Caudron Brothers’ School of Aviation in Le Crotoy, and in 1921, she became the first African American, and Native American woman, to pilot an airplane. She became famous for her flight tricks, which included making figure-eight patterns in the sky. Coleman became widely popular and toured the US giving performances, lessons, and encouraging African American women to fly.